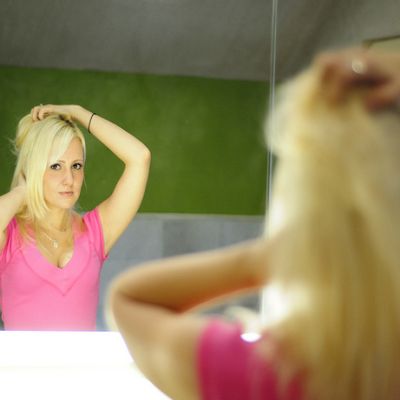 The feminist behind the surgical tape This is a guest post by Mercedes Yanora. She loves sports, historical fiction and cheeseburgers. You can find her on Twitter @cedeyanora where she indulges in progressive politics, political satire, feminism and the occasional Trailer Park Boys meme

It’s mid-May 2015 and I have just finished my first year of grad school at one of America’s most prestigious universities. I sit at my desk contemplating next month’s trip to India for a language immersion programme and wondering whether or not I will finish editing an article due for publication. My eyes return to the dimly lit laptop and I focus in on the following sentence: “Kamala’s perfected costume, fashioned from a burkini — a modest swimsuit for Muslim women — covers her entire body from the neck down, yet her costume is by no means ugly. Kamala is willing to sacrifice a flesh-revealing costume that captures the male gaze for one that ensures her ability to fight crime like a legitimate superhero”.

Every facet of my life reflects a passion for feminism. My research interests, social interactions and professional relationships all contribute to a worldview grounded in an awareness of patriarchy and the need to combat this pervasive system of oppression. Yet in this moment, and many more to come, I am uncertain about my feminist identity. I leave my desk and walk over to my full-length mirror, taking in the image before me: my eyes and cheeks are a swirl of black and blue, dotted with bits of yellow creeping around the edges; dried blood and sweat linger beneath the surgical tape; crusted blood still manages to escape my stitched-up nostrils.

Do my bandages mask my feminism? Can my feminist identity still shine through the bruises?

In 2015 alone, a record-breaking 51,000 plastic surgeries were performed in the UK – 91% of which were on women. Meanwhile, feminism is becoming more and more mainstream, with around 100,000 people taking part in the Women’s March on London last month. How does this obsession with the way we look (which often develops into mental health conditions such as Body Dysmorphic Disorder) fit with our increasing awareness of gender inequality?

No one has a uniform sense of self in which every belief, taste and motivation aligns perfectly and consistently. We are complex, with desires and interests that often clash, leading to the occasional existential crisis. My drive for academic and professional achievement is largely informed by my conviction that women should have the same opportunities as men. However, as evident by my nose job, my pursuits are muddled by an intense desire to conform to patriarchal beauty standards.

Throughout my early twenties, my devotion to feminism has flourished. My social networks and scholarly library are now dominated by feminist thought. I am no longer ignorant to the many intersecting systems of oppression. But an increasing desire for societal validation and a preoccupation with my own looks has developed alongside this. My relationship with my full-length mirror has become ever more intimate: are my hips wide and feminine enough? Are my boobs perky? Will they ever actually grow? Is that cellulite on my ass?

Am I the Dr. Jekyll and Mr. Hyde of feminism, doomed to forsake my unwavering devotion to feminism for an unrelenting quest for ephemeral beauty? No, I am not. In fact, I know I am not the only one troubled by doubts. Lately I’ve found a great deal of solace, and many laughs, in Deborah Frances-White and Sophie Hagan’s podcast, The Guilty Feminist. The hosts and their guests discuss the issues modern feminists face while also “confessing their insecurities, hypocrisies and fears that underlie their lofty principles”.

We should not beat ourselves up over these hypocrisies, especially as they often stem from the society we live in. I wish I lived in a world where I was fully accepted, regardless of disproportionate appendages and other physical ‘flaws’, but I do not. And because I do not, I have internalized the sexism inherent in society’s definition of success. As women, we are taught that physical attractiveness is essential for happiness and fulfilment, whether with a romantic partner, a group of friends or in the workplace. It is much easier to recognise this view than it is to unsubscribe from it.

Getting plastic surgery has enhanced my life because I finally have a semblance of confidence. I no longer find myself staring at jagged sidewalks as people pass by nor do I tense up at the sound of laughter, assuming it must be about me and my overbearing nose. Prior to this, I was too afraid to even interact with most people, let alone confront them about their prejudices.

Feminists who undergo plastic surgery should not be made to feel like betrayers of feminism nor condemned for actions that at first appear unfeminist. Instead, women should band together to promote body positivity, highlight strong role models and, above all, support each other in our choices. We may have had no say in creating our current society, but together we have the power to change it.