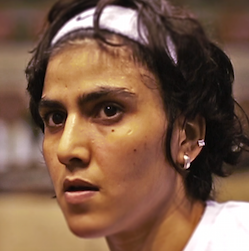 The film focuses on Maria Toorpakai, a young woman from Waziristan in the federally administered tribal areas in Pakistan. With the help of her progressive father Shamsul, Maria defies the strict Taliban law forbidding women to play sports, disguising herself as a boy to practice and compete in squash tournaments. But as she gets older and more famous, her gender is revealed, forcing her to leave the country after persistent death threats to both her and her family. The film shows Maria’s journey to represent Pakistan on the national team, as she stands firmly in her mission to shape her own identity and destiny, navigating between the competition stress familiar to any top athlete and the danger her career presents to both herself and her loving family.

I talked to Erin on Skype last Friday about the making of Girl Unbound and her life as an independent filmmaker. The interview has been edited for brevity.

How did you get the idea for your film or, as sometimes happens, how did the film find you?
That’s exactly right; it’s how the film found me in this case. Maria sought refuge over in Toronto with her squash coach Jonathan [Power]. He met Cassandra [Sanford-Rosenthal], who’s the other producer on the film, and she was, like: “This has gotta be a film”, and she came to me. First, we were talking [about] how it’s a girl who plays squash in Waziristan. It was kind of interesting, but then I heard more about how she passed herself as a boy when she was growing up and that was even more interesting. But I still asked: what’s the story now? With a documentary, you want things to be unfolding in front of you, or at least get a perception that they are.

For me, the film really came together the first time I went to Pakistan and I met her family; that’s when it all gelled for me. This family, who looks and acts so much differently than my family, or lot of them in the West, they have some of the most progressive ideas. [So] I thought: “This can be universally relatable.” It was important for me to tell Maria’s story, but also to have it cross boundaries, and not just have people saying: “Look at that family, way far away.” After you met the family, was it difficult to stay with Maria as the main character? Were you tempted to make a film about her father or her sister, Ayesha?
You hit the nail on the head; there could be a film about her father alone, and about Ayesha. Was it difficult to stay with her? No, it wasn’t, because I felt like she was very open to be in [the] film all the time and she’s very personable. She’s got a funny personality and she was also actively going through things right there in her life. Whereas, even though her father is so interesting, his story—a lot of it—is in the past, although he’s still doing things now. Ayesha is doing incredible things as well, but it’s very much on the political front, and I think Maria has just a story that is relatable and universal, and there’s something pure about the sports thing. But that also being said, documentaries are so often made in the edit room and there was one point, in the beginning, when we tried to have a film that would focus on the three of them. But then you can’t really get deep with one person. There’s a lot of ripe stuff there. I could have filmed for two more years!

I’ve learnt so much on this film and it’s made me feel so much more compassionate toward every other director out there. It takes everything to get these things done

How long were you filming for?
Before I came on board, they did some initial filming; maybe ten seconds of it made it into the final film. I was working on it for about three years, going to Pakistan a few times, following Maria to Seoul, to Hong Kong and then to Toronto several times: as her internal journey progressed, I would go to Toronto to capture that.

Girl Unbound is a very accomplished first feature. What did you do before to gain experience?
I’ve worked in film most of my adult life. I’ve co-founded this company [Cinetic Media] that does sales and financing of independent films and documentaries, so I was acting as support, or a consultant for filmmakers for years. I’ve always wanted to make my own films but I couldn’t figure out how, I didn’t have my own money [and] I didn’t have the ability to go out and just leave work for a year or two. I segued out of that: I produced about four documentaries first (before getting into this one) and I had also been directing lots of shorts. I don’t know – is it old to be 39 and premiering your first film? I don’t care; that was my trajectory to get there and I think it worked out right because, being on the producing side of things, of course you learn a ton. Directing all those shorts from work, you learn a lot. But being a director on your first feature is completely different than anything else. I don’t think I understood that. Even though, as a producer, I’ve made so many films before, I’ve just learnt so much on this film and it’s made me feel so much more compassionate toward every other director out there. It takes everything to get these things done. What was most challenging about the technical aspects of the process, especially when filming in Pakistan?
There are so many challenges, but talking specifically about going to Pakistan –especially in the tribal areas – as an American, I wasn’t allowed to go there. I didn’t have permission. I went undercover, I wore Maria’s clothes and Ayesha’s clothes and, at the different checkpoints, they would just see my eyes. There were some times when things got pretty dicey and people were questioning who I was. But when I think about the technical aspects, my ideal film would be super cinematic, having the art and the beauty shine through metaphorically, letting every single detail captured in the frame represent visually what was going on with Maria’s life or her internal journey. The thing is, though, if you are in the back of the car, going into the tribal areas and you’ve got to have those small cameras and every single moment, I’m like: “Is it safe to have it up or am I gonna get shot? Is my other cameraman shooting the right way? What lens does he have on? My batteries are about to run out! Did I back up these cards? Where are my hard drives?”

It’s this frenzy, when your mind is thinking about 8000 things at once. This is where the subject starts to dictate the visual in some ways. And I try to tell myself that when I look at the footage after shooting for a day, this could have looked so much better, but we are literally in the moment in the room where shit’s going down and you just have to have the camera there and capture it. During the filmmaking, it was a tiny crew – two of us sometimes, up to four. Then you live with this footage for the next couple of years in the edit. You have to be OK with that.

The most challenging part – and it’s never a sexy answer – is also often financial. Making these films takes everything out of you – physically, emotionally, time-wise – and then you come back [from shooting] and you’ve got to finish it. You need the financial ability to keep your life going, to pay the bills. I feel so compelled to keep telling these stories but it’s so difficult to just stay alive, to pay your rent, to eat.

The thing that really has impacted me, working with Maria, is how she has consistently broken down gender stereotypes at every moment of her life, and she still does

What would you like viewers to remember most after seeing your film?
I think most people come away with the family story between Maria and her father, which I love. I want people to remember that. But even more so, the thing that really has impacted me working with Maria, is how she has consistently broken down gender stereotypes at every moment of her life, and she still does. To me, that’s even more powerful. I feel like as a woman I need that; I want that. I wish [that] as a 13-year-old girl, I would have known about Maria’s story.

How do you feel about Girl Unbound screening at the Human Rights Watch Festival? How do you see its role in the advancement of human rights?
To me this is one of the reasons we made this film. It’s over-said in these days we live in, but I live in a country where Trump has just become president and there’s a lot of bans on people simply because they are from Muslim majority countries. There’s so many things I want people to take away from this film – we’ve already talked about some– but also, very simply, what we call “middle America” here is a bit like other places in the world where people think that being a Muslim or being from Pakistan or being from the tribal areas makes you a terrorist. I hope there’s a lot more to the film, but even at that base level I want people to connect [with the characters].

Showing it in this film festival may shine a light on it as being about human rights, as opposed to more commercial film festivals which would see it as a beautiful story or a story about family. I’m curious to see the Q&A here; I think there will be much more of a focus on girls and the rights they have in that region. It’s super exciting, as this is going to be the first time Maria’s dad is ever going to see the film on the big screen. He’s coming up for the festival and that’s really special to us. He’s a big part of it and yet he has never been able to come to any of these film festivals. It will be a big moment.

Girl Unbound is screening in London on 15 and 16 March. Both screenings will be followed by a Q&A with the director and Maria.

All images courtesy of the Human Rights Film Festival.
Images description:
1. A young brown-skinned person, woman-presenting, with dark eyes and dark short hair, wearing a white sports headband and a white t-shirt, is standing probably at a sports hall.
2. A young brown-skinned woman wearing a white headscarf and an older brown-skinned man wearing glasses and a turban are sitting in the car. It looks like they’re having an intense conversation.
3. A close up of a woman’s face, she’s brown-skinned with dark brown eyes and both her head and mouth covered with white fabric. She’s looking to the side, touching her face.

This article was edited on 14 March 2017 to change the trailer link and one of the pull quotes.