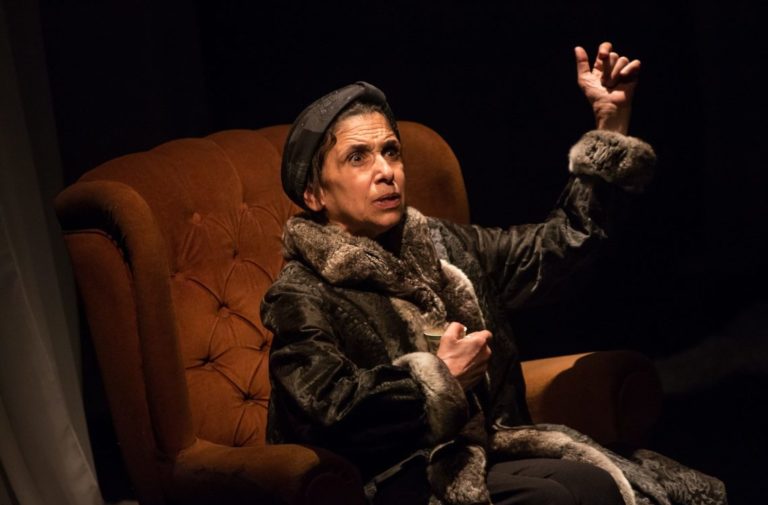 The magical world of Karen Blixen

Karen Blixen wrote her memoir Out of Africa, famously transformed into a film starring Meryl Streep and Robert Redford two decades after her death, about her life on a coffee plantation in the twilight of British colonial Kenya. She was a Danish aristocrat through her marriage to Baron Bror Blixen-Finecke, although it was his twin brother she really loved, and she helped her husband with his unsuccessful coffee plantation until their eventual divorce. Before this however, she contracted syphilis from his infidelities, for which she was blamed by local rumours. Blixen left Africa in 1931 but continued to write until her death, in English, Danish and French, including the celebrated Babette’s Feast and Seven Gothic Tales.

Riotous Company’s Out of Blixen, co-produced by the Print Room, retells the stories that Karen Blixen wrote, often under the male pseudonym Isak Dinesen, interwoven with stories of Blixen’s own life. Kathryn Hunter, who directed the piece, appears sporadically as Blixen to narrate parts of the stories and comment ironically on her own life, boasting about her invitations from the likes of Marilyn Monroe and even Hitler, yet regretfully mentioning her husband’s absence and lamenting the men she loved who died in plane crashes: first, her husband’s twin, and later Denys Finch Hatton, the love of her life.

Her stories are wonderful, interweaving religious imagery and themes of transformation, abusive power and how much we are willing to undergo for love

Kathryn Hunter is magnificent. She has an ability to convey a great deal of emotion in a glance or a tremor in her voice and uses this with immense power. Though small and slight, when she is on stage she has as much presence as you would expect from a woman such as Blixen, who she physically resembles. The character of Karen Blixen sometimes appears as a young girl, a fish offering wisdom or a bird in flight, as inconstant and elusive as her stories themselves. Her stories are wonderful, interweaving religious imagery and themes of transformation, abusive power and how much we are willing to undergo for love.

The production was devised by the entire cast, and Mia Theil Have, Marcello Magni and Femi Elufowoju, jr all work excellently together, using dance, acrobatics, music and physical theatre to produce something that is truly magical to watch. Clothes upon a hanger become the ghost of a departed lover, gauzy white curtains become an angel’s wings and the hands of lovers become birds as we are told by a passing blowfish that man has hands instead of wings because being able to touch is better than being able to fly.

David Plater’s lighting is beautiful throughout and Mia Theil Have’s silhouette as she works in the field as the sun sets creates a stunningly haunting image. Her dancing in the other scenes is also magnetic, as when she hangs suspended, a bird caught in a net, at the play’s opening. Marcello Magni is sympathetic, touching even, when he kills a man so he might not be late to meet the girl he loves, yet cruelly heartless as the tyrant owner of the field. Femi Elufowoju, jr is sweetly funny as the overbearing giant killed by a man desperate to meet his love, and charismatic as one of the storytellers Karen Blixen invites to recount a tale.

The art and the power of storytelling is evident in this piece. It is not always easy to follow, and perhaps could benefit from a touch more clarity as at times it is easy to become distracted and confused by the amount of action on the not-so-large stage of the Coronet, the Print Room’s new home in Notting Hill. But in pieces like this, there is an implicit contract between players and audience to fill in the gaps with our imagination as we watch: and so, to us, red rubber gloves become the blood on a murderer’s hands, and then the comb and wattle on a rooster’s head. Just like when we read a story, what we see on stage is not the only thing that is there, but the rest we must create ourselves.

Despite her extensive work in theatre, Kathryn Hunter is probably most recognised for her role as Mrs Figg in the film Harry Potter and the Order of the Phoenix. And when I spoke to her after the play, she explained that what she had wanted to evoke with this play was what is so special about Harry Potter – the sense of a magical world lurking just beneath the surface of the people and objects that we see around us. With Nikola Kodjabashia’s score and an extremely talented cast, she has created just that.

In theatre, often, we see gritty and real portraits of the tragedies and ugly parts of humanity; here too there is ugliness and sadness, but also a genuine sense of wonder and something truly sublime and a real celebration of the life and works of a truly remarkable woman.

Out of Blixen is playing at the Print Room in Notting Hill, London until 22 April 2017

The image is a photograph of Kathryn Hunter as Karen Blixen used with permission of the Print Room. Hunter is wearing a dark fur coat and has a black turban on her head. Her left arm is raised and her right hand clutches a teacup to her chest. She has an intense expression on her face. She sits in a brown armchair against a black background.