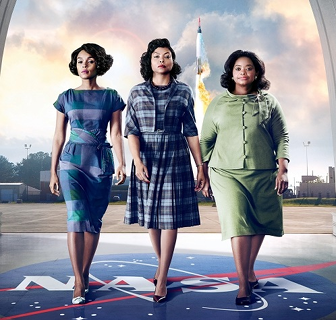 The ‘firsts’ are often hidden There are many things that set Hidden Figures apart from most films that are currently being produced for the big screen: it stars three African-American women, whose journey is driven by their intelligence and abilities against the struggles they face not only as women, not only as people of colour, not only as working class, but as women of colour working for NASA in the 1960s. The fact that the film is based on true events makes it all the more extraordinary.

In the opening scene, we meet Katherine G. Johnson (Taraji P. Henson), Mary Jackson (Janelle Monáe) and Dorothy Vaughan (Octavia Spencer) on the side of the road, late for work in a broken-down car. In a not-so-subtle reference to current events they’re approached by a white male police officer. The tension immediately rises. However, the film’s bright pop colours and the womens’ snarky remarks tell us we’re not here for a tragedy. They flash their NASA badges to the unbelieving and speechless officer and get a ride in the backseat of the police car straight to work. It’s a subversive opening because we’re not invited to pity the women, instead they’re in control.

The film shows the audience how discrimination can come from multiple places and for multiple reasons. Intersectionality in a nutshell

The workforce at NASA is segregated at this time and all three women work in the same computer department when the audience first meets them. The film then portrays the unique journeys taken by each of these phenomenal women.

Taraji P. Henson’s character, Katherine G. Johnson, has incredible skills in analytical geometry, which is exactly what the Space Task Group at NASA needs to speed up the process of sending astronauts into space. Her skills get her a promotion to a white area of NASA, so white that there is not even a bathroom for her. But the prospect of a thirty minute run each way whenever she has to pee and the discomfort of a group of suits terrified of her using the common coffee pot is not enough to stop her from fighting her way up and gaining the boss’s favour. As an aside, Al Harrison’s character (played by Kevin Costner) is clearly there to make sure white audiences don’t feel too threatened, but never mind.

Finally, she discovers the right equation that will allow John Glenn (Glen Powell) to complete the USA’s first orbit around Earth. She’s not only a mathematical genius but also a widow with three children. Her relationship with them is portrayed as solid and lovely and she proceeds to find love again with a military officer from her church community, Jim Johnson (Mahershala Ali). Jim does not make a good first impression as he is sceptical that Katherine actually works at NASA, to which she responds: “They let women do some things at NASA, and it’s not because we wear skirts, it’s because we wear glasses.”

Not only it is incredibly satisfying to see Katherine demanding respect, but it also shows the audience how the issues she faces are not only related to the colour of her skin but to her gender as well and how discrimination can come from multiple places and for multiple reasons. Intersectionality in a nutshell.

Katherine handles her many roles masterfully, reminding the viewer that women do not have to choose between motherhood, falling in love and having a career – they can do all. This is aptly shown by the fact that during the film, Katherine marries Jim and there is only one scene dedicated to the wedding. Unlike many Hollywood films that over-utilise the happily ever after trope, her marriage is a passing moment in a much larger, astronomic story.

Octavia Spencer plays Dorothy Vaughan who is the oldest of the trio and acts as the unofficial supervisor of the segregated computer department, a role that she wants recognition for both as a matter of correctness and for the rightful salary increase it would involve. But Vivian Mitchell (Kirsten Dunst), a white woman in charge of appointing this role, keeps stalling. One might imagine, as a woman, that she would understand and empathise with the struggle Dorothy faces, but that doesn’t seem to be the case.

The relationship between the two characters is a marvellous example of internalised racism. Vivian is never explicitly rude or disrespectful to Dorothy although she insists on referring to Dorothy by her first name (whilst she is always referred to as Mrs Mitchell) demonstrating that she does not treat her as an equal. This leads to a poignant scene in the bathroom where Vivian says: “Despite what you might think, I have nothing against y’all.” Dorothy’s response is all there is to say: “I know you probably believe that.” This lack of sugar coating the truth is powerful and the audience is encouraged to hope that it will change Vivian’s mind.

Dorothy then learns that her team will soon be replaced by a computer, an IBM 7090, and takes it upon herself to learn FORTRAN (a programming language then almost unknown) and teaches it to all the women in her department. It is only after this that Vivian awards Dorothy the title of supervisor and finally addresses her as Mrs Vaughan, rather than by her first name. Baby steps.

These three women are proof that there isn’t just one road to excellence or a perfect model to follow, but that everyone has their own story

Last but not least, Janelle Monáe’s character Mary Jackson wants to be an engineer, but to do so she needs to attend a white-only school. On a side note, she’s the most conventionally attractive of the trio and yet not one single comment is made about her beauty and nor does it drive the plot in any way. I think that is a unique thing to omit, considering how often women are sexualised in films.

Mary needs authorisation to attend the white-only school and she takes her case to court. In convincing the judge to give her access to these segregated classes, she delivers the speech that encapsulates the central idea of the film. She asks him how many of the cases he’s going to hear that day are going to make him the first: the first judge to permit integrated education, helping her become NASA’s first black female engineer.

This is what the film does: it delivers three different stories of ‘firsts’ against all the odds. Katherine, Dorothy and Mary are all black women, all intelligent, all friends, but all very different. Each of their journeys are indispensible to the overall story with none overshadowing the others. They start from different points and arrive at different successes.

These three women are proof that there isn’t just one road to excellence or a perfect model to follow, but that everyone has their own story. And it is also a reminder of how many fields remain inaccessible to certain genders, ethnicities or backgrounds just because of a stereotypical ideas of predisposition, until someone comes along, fighting to break down that barrier and be the first of many.

The film presents the women’s struggles with racism and misogyny and what it means to be complex individuals. Yet it does so in a sparky, uplifting way, with colourful cinematography, catchy songs, bright outfits, witty lines and happy endings.

The film can stand as inspiration to current and future generations, not just in aeronautical science but in all STEM subjects. I hope the success of the film will encourage more representations of stories of brilliant figures found in the cracks of history. Filmmaking such as this can hearten those who think they don’t deserve to dream so big or be part of such great stories. Hidden Figures reminds us the fight for equality is hard, long and unfair but it is moving forward and it’s not only straight white men who get to change the world.

Hidden Figures is released on DVD on 11 April 2017

Image description:
The image shows three women striding towards the viewer. They are (from left to right) Mary Jackson (Janelle Monáe) Katherine G. Johnson (Taraji P. Henson), and Dorothy Vaughan (Octavia Spencer). They are each individually dressed and look confident. They are pictured striding across the NASA logo and a rocket takes off in the distance behind them. This image is sourced from the Fox Movies website http://www.foxmovies.com/movies/hidden-figures, all rights reserved.