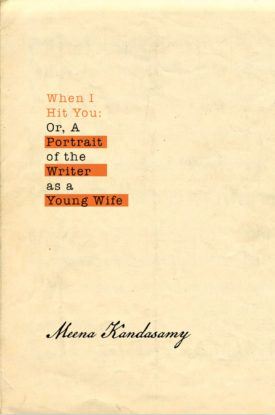 A story that breaks the skin When you work for a domestic abuse charity, sometimes you find the thick skin you have to develop becoming more and more difficult to bruise. You harden up, become a little immune. Yet still, most days, there is a story you hear or read from a survivor that breaks the skin – a scrape, a graze, a little splinter you can’t get out. It stays with you all day. Some days, a huge great wound opens, and you can’t forget. It is with you for weeks – it makes you type faster, work harder, do more. You remember why you do what you do, and why every woman’s story of abuse is important, and adds to the big picture – the enormous, unavoidable picture – that domestic abuse is widespread, misunderstood and incredibly complex.

Meena Kandasamy’s When I Hit You opens one of those huge great wounds. Based on her own experiences, she weaves a tale of a young wife and her abuser in India. Taken away from her family and isolated from her friends, her husband, a political revolutionary, quickly goes from controlling to violent, to eventually a very real threat to her life. Kandasamy’s poetic style jars with the violence she depicts, creating an increasingly uncomfortable read, yet one I was unable to put down. Although our narrator remains nameless, and in some ways quite distant, her thoughts became my own. She is a writer, and one of the most powerful narrative tools is her journey to completely losing her voice. Her abuser starts by removing her from social media, and it spirals from there, until she is silent. As the narrative switches from her husband to past lovers and relationships, we see her outgoing personality and vivacity, putting her silence into shockingly stark contrast.

Some of the most fascinating elements of the novel are the discussions the narrator has with her parents on the phone. It is an invaluable insight into the cultural differences of marriage across the world – the pressure for her to stay with an abusive husband from her own parents to avoid shame is heart-breaking. Similarly, her mother’s comments of how normal abuse is, and how that normalisation manifests in the words she tells her daughter, are both infuriating and full of sadness: “All marriage is slow. A marriage is not magic. You will have to give him time. He will come round.” Her mother is still with her own abuser, the narrator’s father.

Part of the work of domestic abuse charities is to bust the myths that surround it, the question ‘Why doesn’t she just leave?’ being one of the most common and the clearest demonstration of ignorance around the problem. Kandasamy’s storytelling is an almost perfect picture of the difficulty in leaving an abusive partner. From the way their relationship starts – her, heartbroken from a previous relationship with a powerful but unattainable man, and him, a political revolutionary who talks with passion and commits to his beliefs (at least, so it seems). She marries him because he is not the man who broke her heart. And there it begins – he has the power.

The subtleties of coercive control are made obvious by Kandasamy. Our narrator begins to dress as she knows he wants her to, plain and unsexual so as not to attract other men. They move far from her home. He puts her down at every opportunity, telling her exactly why she is wrong all the time. He removes her from social media to “set her free”, he deletes a lifetime of emails (in fact, her entire career), he gets her a local phone and monitors her calls. He keeps her in the house, cleaning and cooking. Soon she is isolated from all she knows and the people she loves. He allows her to speak with her parents, whom he charms, and whom he knows will encourage her to stay. She has become the obedient wife he thinks he deserves to own.

If we are to tackle abuse, we must first understand it, and that is where we face huge barriers at the moment

This is where people fail to see how that pattern of behaviour can lead to violence. It is always about control. Abusers start by subtly manipulating things to isolate their victim, until she has no one to rely on but her abuser. When it seems our narrator might think of leaving, he beats her. The bully turns into a brute. He rapes her, to remove any enjoyment of sex for her, but also as a means of control and to get her pregnant, so she has even more cause to stay. His methods become more desperate as she becomes more distant, fearing for her life. Another common myth of domestic abuse is that it isn’t that serious – women who think their partners will kill them are rarely believed, until it is too late. As the story progressed, my fear for the narrator’s life grew and grew until I was sure her death was the inevitable conclusion.

When I Hit You is a powerful account of domestic abuse, and how quickly an abusive relationship can develop until a victim is completely trapped. Whilst it is set in India in the context of specific cultural beliefs and traditions, the fundamentals of abuse are universal and this is portrayed incredibly well. The dark humour throughout helps form a connection with the narrator and reminds the reader that this is just life for some women. It isn’t an easy read, but it is an important one. If we are to tackle abuse, we must first understand it, and that is where we face huge barriers at the moment. Domestic abuse is a feminist issue – it overwhelmingly effects more women than men (of course, it does happen to men), and is mostly perpetrated by men as a means of power and control. We need more engaging, beautifully written fiction like When I Hit You in order to start tackling the stark reality of abuse across the world.

When I Hit You by Meena Kandasamy is published by Atlantic Books and is available to purchase here.

The image is of the book cover, which is largely a brown paper or parchment style paper. To the left of the cover there is the full title of the book – “When I Hit You: Or, A Portrait of the Writer as a Young Wife” in a typewriter style font. The words “Portrait”, “Writer” and “Young Wife” are highlighted in red. The author’s name, Meena Kandasamy, is written in a sloping, handwritten font at the bottom of the cover.