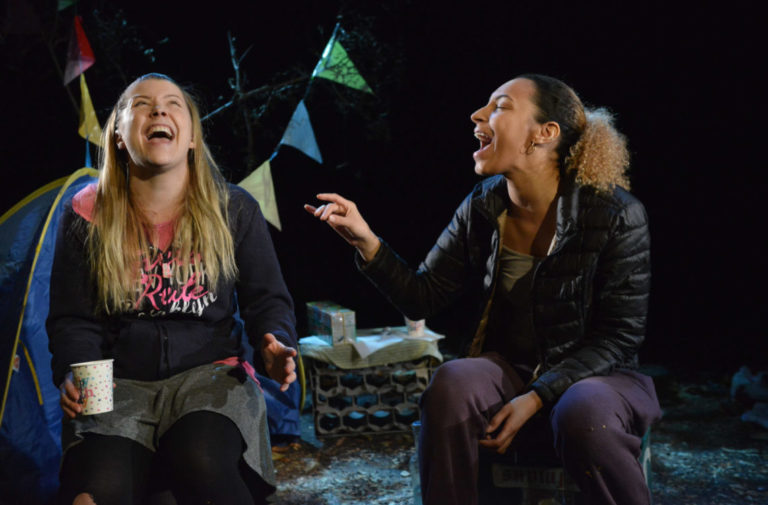 Young lives lived under the radar

It is a relatively quiet final night of Fifth Word and Nottingham Playhouse’s All The Little Lights tour. The Drum, Theatre Royal Plymouth’s black box space, is just over half full and there is an atmosphere of caution among the audience. Jane Upton’s play about “young lives lived under the radar” is brightly, brilliantly funny in parts. But it’s very easy to laugh a split-second too late. This is a birthday party on a knife-edge.

As the audience enter, Joanne (Tessie Orange-Turner) and Amy (Esther-Grace Button) are already on stage, setting up a party in a campsite next to some railway tracks. But the attempt to celebrate Lisa’s (Sarah Hoare) birthday unravels as Joanne’s friendships with both her and Amy are shown to be in a distorted, uncomfortable mid-space between grooming and sisterhood.

Max Dorey’s set is dirty with grit and crisp packets, while a flimsy child’s tent stands out in bright colours next to a raised fragment of the railway track. It’s realistic but with rough, broken-off edges and has hidden lighting in the otherwise dark space: fairy lights in the litter and rope lights as telephone wires.

The cramped space created is deftly navigated by director Laura Ford; discarded crates are moved and used as seats in various formations but never in a way that feels staged or arranged. It is a mark of great direction when it disappears from view; the actors are clearly in complete control even as the conversation between the three girls spirals. The sound design by Max Pappenheim is a masterstroke, from the background outdoor hum of night-time, to the deafening oncoming trains, to the heartbeat of bass from a car radio as it gets closer and closer.

Whilst the fear of unseen, offstage characters hangs heavy – for Lisa in particular – there is never anyone else onstage except the three girls. Upton writes in the programme notes that she “chose not to give the men a voice at all” and it’s easy to forget how rare this is. In stories about abuse, fictional or real, it is unusual to hear next to nothing about the motivations and circumstances of the abusers. In stories about female friendship, it is (aggravatingly) unusual not to have discussions of men dominate the conversation. In All The Little Lights the impact of the male abusers is skirted around, not because it’s left unaddressed, but because Upton understands how people talk to each other and what they talk about. Like a real conversation, threads get dropped, picked up and come back round.

When Lisa asks: “What did they do?”, Joanne replies: “Everything. Could see my insides. Ain’t bothered, but…”. There’s no misapprehension about the violence, but the play is never explicit with the details. By not dwelling on what the girls have been subjected to but trying to address the how of how they are dealing with it and how it came about instead, Upton leaves no space to objectify, sexualise, or dehumanise their experiences. It’s not the past actions of the men who’ve abused them but the present lives of the girls themselves – how they cope, how they don’t and what they choose to do next – that are front and centre.

With characters aged 12, 15 and 16, all three of the actors are playing down. But there are no high-pitched, lisping little girl voices, just teenagers in all their swaggering, swearing adultness and giggling, awkward childishness. Button, Hoare and Orange-Turner are all completely convincing in their portrayals of children pretending, or forced, to be grown-ups. All three are so charismatic in their individual roles that it would be completely worth re-watching the play over and over to take in each of their individual performances.

There is an extent to which the cast hold the play so confidently and pitch it so perfectly that the overall effect sometimes comes across as smoothly professional, where a few rougher edges might make it hit the audience harder. It also causes a feeling of emotional distance from the characters, though in saying that, experiencing such a disconnect still leaves an impression.

There’s something deeply unsettling underpinning All The Little Lights that is slowly teased out for the audience to confront, something about how we’re taught to feel about people even when we know they deserve empathy, which underscores how desperately relevant and powerful this play is. Often our society does not treat working class teenage girls well, they are instead regularly characterised as being trouble. All The Little Lights forces the audience to sit in a room for an hour with characters they might find it difficult to empathise with. It’s too easy to be the kind of adult that Joanne quotes, the kind of person who would say: “There are thirteen-year-old girls and there are thirteen-year-old girls, if you know what I mean.”

It is always going to be tempting to describe a play like All The Little Lights as not easy to watch but there is a wholeness and life to this play; it doesn’t shout about its issues but it wears its heart on its sleeve instead. Hopefully another run of All The Little Lights isn’t far off, so if it does come near you, take the opportunity to see it and then see it again. It’s important.

All The Little Lights will have a further run in London in the near future and details will be posted on the Fifth Word website.

The image is a production photograph of Esther-Grace Button and Tessie Orange-Turner in All The Little Lights, credit Robert Day. The two sit near each other on crates, both are laughing uproariously, looking up with their mouths wide open. Behind them a blue tent and some bunting can just be seen.