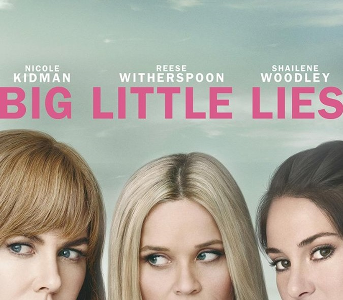 “So what really happened?” elegant California mom Celeste (Nicole Kidman) asks her best friend, force of nature Madeline (Reese Witherspoon.) The question is really setting out the premise of HBO’s miniseries, Big Little Lies: that in the most curated, perfect-seeming lives, there lurk secrets and hidden depths. The series presents a totally focused study on the inner lives of several mothers of children in the same first grade class in Monterey, California. Kidman and Witherspoon served as producers on the project, with Witherspoon citing her delight at helming a project that allowed her to primarily interact with her talented fellow actresses.

Jane (Shailene Woodley) is a young single mother, who has recently moved to Monterey and feels a bit adrift away from her supportive family. Madeline quickly takes Jane under her wing and introduces Jane to her best friend Celeste, a guarded homemaker mother of twin boys. The plot begins with a series of petty feuds between Madeline and Silicon Valley entrepreneur Renata (Laura Dern), over classroom bullying and over Madeline’s latest community theatre project, a production of Avenue Q. The class also includes the daughter of Madeline’s ex-husband Nathan (James Tupper) and his new wife Bonnie (Zoë Kravitz). Madeline and Nathan frequently clash over parenting their teenage daughter Abigail (Kathryn Newton.)

It is a legitimate criticism of the series that it focuses on incredibly affluent women, who are almost completely white

The series is framed by a mystery – the Monterey police are investigating a murder of a parent at a school fundraising evening (the victim’s identity is hidden until the last episode). Assorted background minor characters are interviewed, commenting on and encouraging the intense drama between the women and their husbands during the school year. Their world is familiar to anyone who has ever shopped in Whole Foods or attended a class at Sweaty Betty: well groomed, affluent and totally privileged.

It is a legitimate criticism of the series that it focuses on incredibly affluent women, who are almost completely white (with the exception of Bonnie). While Madeline is intended to be middle class and Jane is a struggling single mother, both live in homes which would seem incredibly unaffordable for their lives (is Monterey really that much cheaper than London real estate?). The effect is to eliminate any real sense of diversity amongst the characters, instead isolating them within an affluent bubble.

By portraying an abusive relationship between wealthy, beautiful people with immaculate-seeming lives, the series is effective at dismantling stigma and myths around domestic violence

Yet it is this sheen of beauty and affluence that allows the series to make such strong points regarding the pain these charmed women experience. Celeste and her entrepreneur husband Perry (Alexander Skarsgård) may seem like the perfect, passionate couple, but Celeste is hiding the domestic violence she experiences, not even confiding in her best friend Madeline. The series’ casting cleverly makes use of the public persona of Kidman and Skarsgård – both of whom, as actors in the public consciousness, can appear to be flawless and untouchable. Domestic violence can often be portrayed as a problem which affects poorer women, women without education or options. By portraying an abusive relationship between wealthy, beautiful people with seemingly immaculate lives, the series is effective at dismantling stigma and myths around domestic violence.

The show also humanises the lived experience of domestic violence. Skarsgård gives a wonderful performance as a man who is by turn charming and merciless, giving the impression of a man who can appear to be loving and vulnerable and in a second, loses any empathy or humanity.

The series is an unusually accurate portrayal not just of the violent stage of the relationship, but the cycle of abuse in its entirety

Survivors are often asked why they didn’t leave a harmful relationship sooner. Skarsgård perfectly weaves a character who continues to draw his wife in; by apologising, by promising to change, and even demonstrating self-awareness about the pain that his abuse causes. Celeste is eventually able to verbalise that the physical pain is a form of power; that in their cycle of abuse, the only way for her to maintain power is after her husband is violent, when she withholds forgiveness. It’s an unusually accurate portrayal not just of the violent stage of the relationship, but the cycle of abuse in its entirety.

The show also gives an accurate perspective of how professionals often support survivors, particularly in relation to safety planning. Celeste’s therapist tells her that she is afraid for Celeste, but when Celeste makes it clear that she is not ready to leave Perry, they begin to make a plan for when the abuse happens again; forcing Celeste to acknowledge that the status quo will never change. The series also demonstrates that the most violent point of an abusive relationship is when a survivor attempts to leave; highlighting the risks involved in escaping violence within the home.

In addition to a myth-busting portrayal of domestic violence, the series also deals with the traumatic aftermath of rape. Jane conceived her son, Ziggy (Iain Armitage), after a sexual assault. The series makes it clear that instead of being able to seek professional support and understanding from friends and family, she simply bottled-up her emotions to protect Ziggy. Jane shows strong indicators of trauma; nightmares and strong worries about safety in her home. She attempts to cope through exercise and carrying a gun, but still struggles. Jane is finally able to confide in Madeline. Madeline does not blame or judge her, but is incredibly empathetic. She acknowledges that it was an awful and unfair thing to have happened to Jane. While Madeline’s support does not erase Jane’s trauma, it is portrayed as essential to the healing process: Jane begins to imagine herself not as running alone in dangerous territory, but with Celeste and Madeline by her side.

The series is a bit overcrowded compared to the book (written by Liane Moriarty). The storyline of the community divide over the controversial performance of Avenue Q is understated and illuminating, demonstrating both Madeline’s dogged determination and Celeste’s longing for an identity outside of her role as wife and mother. Yet the related plot, of Madeline’s extramarital affair with the director, is underserved and perhaps a step too far into melodrama.

The series is unusual in the attention it pays to the domestic lives of women and the power it accords to female friendship. While Jane, Madeline and Celeste are dealing with their own crises at home, they continue to support each other and the series resists the temptation to attempt to pit the women against each other. There has been divided opinion in the press as to whether the series will return for a second season, but hopefully the show will continue to give these actresses an excellent opportunity to demonstrate the complexities found in every woman’s life.

You can watch Big Little Lies on Sky Atlantic.

Image description: The bottom of the image shows the top half of the faces of (from left to right) Nicole Kidman, Reese Witherspoon and Shailene Woodley, who play Celeste, Madeline and Jane respectively. Both Celeste and Madeline are looking suspiciously to the left whereas Jane is looking straight at the camera. Across the top of the image are the words BIG LITTLE LIES in pink and the names of the actors in white. Image used under fair dealing.

Nick Beard is a PhD student researching sexual and domestic violence amongst asylum seekers, and really enjoys watching TV with her cat, McNulty. She comes from the same hometown as Ryan Phillippe and enjoys the same deli as Reese Witherspoon