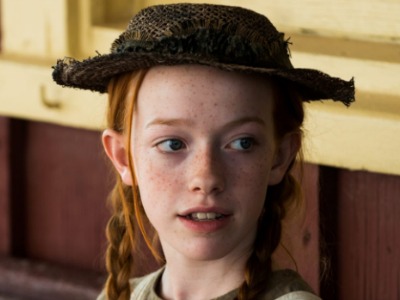 As a little orphan, Anne (Amybeth McNulty) arrives at Avonlea to meet her adopted family and has traumatic flashbacks of her experiences in a previous family, where she underwent physical and emotional abuse. She is met at the station by Green Gables’ farmer Matthew Cuthbert (R. H. Thomson), who is not expecting a girl, as he and his sister Marilla (Geraldine James) had asked for a boy to help them with the farm work. He is, however, fascinated by the young girl’s enthusiasm at the idea of finally having a family and on the way to the farm, he immediately grows fond of her monologues made of big words and literary idioms, which she delivers with a conviction that he finds surprising.

Marilla isn’t as easily won over and informs Anne of the mistake: she will have to be sent back and replaced by a boy. But Anne insists that she is capable of doing the exact same work a boy could do, if not more, and desperately pleads on her knees to be taken in.

As the audience is already aware of Anne’s troubled past, it is easy to understand how her over-the-top behaviour could be motivated by PTSD. To Marilla, however, she just sounds like an ill-mannered brat.

However, after a few days at Green Gables, Marilla changes her mind, as she sees just how hard Anne tries to fit in and how competent she actually is. Marilla is strict but doesn’t shy away from recognising when Anne is right, which isn’t always an easy task for a parent. And Anne, happy in her new family, brightens up as she settles in, collecting blooming branches to care for in her room and fantasising about becoming a princess.

Anne is also very insecure, especially about her looks, and is often unfiltered, rude and naive. Most importantly, she is also very different from the puff-sleeved girls of Avonlea. Her journey to acceptance in the community isn’t an easy one, as she is confronted by bullying, accusations of stealing and corrupting the other youth and a general prejudice towards her origins. It is clear that Anne with an E investigates darker shades of Anne’s story, departing slightly from the story’s cheery heritage to adapt to its new audience, and some hardcore fans of the original books have complained that the departure from the uplifting tone of the novel has ruined Anne’s cheerful spirit. However, the decision to show the grimmest parts of Anne’s story, along with the prejudice she has to fight against, not only makes her journey to recovery much more inspiring and resonant, but also passes on an important message about how trauma can hide in the most cheerful people and there should be no shame in showing it.

Sure, it might make Anne – and the show – more complicated, but trauma is, realistically, a part of many people’s lives. Referencing trauma’s presence without showing or exploring it would arguably sugarcoat the truth.

Showrunner Moira Walley-Beckett defines Anne as an “accidental feminist” of her time, and the attempt to bring that subtextual accident to light is clear in her adaptation. Anne begins her journey by having to prove her worth despite not being a boy and therefore more valued by society at the time. She is able to do the farm work but also has no trouble doing the things traditionally associated with girls, such as taking care of the kitchen or lusting after puffed sleeves. She wants to be like other girls because guess what? There is nothing wrong with being ‘like a girl’. Anne’s exceptionality never causes conflict or competition among her friends; if anything, they help build each other up. Anne teaches the girls to read and expand their minds, while they give Anne the sense of belonging she’s been looking for.

However, Anne has an equally important lesson for the parents of the community and the parents watching the show. She is not an easy child to care for and carries emotional baggage that most children don’t, but that’s no excuse not to commit to trying. It’s impossible to predict what adult a child will grow into and the previous experiences adopted children have surely played a part in this.

Being a parent is a choice that should be made with the willingness to take on whatever responsibility comes with it, including unconditional love and support of the child. No limitations should be imposed on the basis of a parent’s expectations of them, whether that happens to be about their gender, sexuality or goals in life. Anne proves she’s as good in the kitchen as she is in the fields and at school, but the show never fails to emphasise how her confidence and mental well-being is proportionate to the trust the Cuthberts put in her. It’s also interesting how her relationship with Diana (Dalila Bela), her newly-found best friend and neighbour, has been coded as queer. Not only are they often shown being affectionate with one another in a way that Anne isn’t with anyone else, which includes giving Diana a lock of her hair — a very common romantic trope — but Anne also professes her love for Diana as eternal when she thinks they are going to be separated.

Anne also mentions that she already hates Diana’s future husband because she knows he’ll stop them from “living together forever” and often refers to Diana as her “kindred spirit”. This is a well-known synonym of soulmate and also a term used to create a parallel with the show’s canonical lesbian couple, Diana’s aunt Josephine (Deborah Grover) and her late companion, who she also defines as her kindred spirit.

Of course, there’s the subject of Gilbert (Lucas Jade Zumann), the only boy in Anne’s class who is able to keep up with her intellectually and who grows very fond of her. He’s the one she’s supposed to end up with according to the original book, but one wonders if season two might decide to explore the subtext of compulsory heterosexuality — especially when this series started with Anne being convincingly uninterested in boys.

The show’s line “Every idea was modern once, until it wasn’t” is a good reminder that the original Anne and her unapologetic cheerfulness, cleverness and wild spirit gathered a huge following in an age when girls were not often represented like this in fiction. When it comes to writing an Anne for this new century, it only seems fair that she addresses those less-glamorous themes of identity, prejudice, education and belonging that we desperately need to talk about, instead of hiding from them because they’re not as pretty.

1. Anne of Green Gables, a pale-faced and red-haired young girl looks to the right of the camera. She is wearing a modest black straw hat. Her red hair is braided, with her plaits tucked behind her ears. Only her face is in the frame but she appears to be sitting in a farmhouse or a stable.

2. Anne walks with the Cuthberts through a field. Anne wears a practical brown dress and straw hat and looks straight ahead. Marilla wears a long-sleeve, full-length purple dress and holds a straw basket while speaking to Matthew. Matthew wears a black three-piece suit and bowler hat.

3. Diana and Anne lean against a wooden fence together, looking into the distance. Diana has dark brown hair and wears a pale blue dress. She is crouching slightly. Anne stands up straight and appears to be speaking. She is wearing a practical dark brown dress.