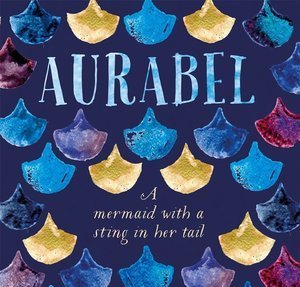 In the pages of her ‘Lorali’ books, Laura Dockrill has created an alternate reality. It shares a lot of similarities with the world as we know it, only fantastical creatures are real, and they’ve got a whole political system and agenda of their own. In the first book of the series, Lorali, something akin to a realist imagining of The Little Mermaid, a Mer princess comes to land and discovers, among many other things, that humans are not exactly nice to things they find unusual. Not content with updating our views on mermaids, Dockrill brings in pirates, selkies and sea monsters, creating magic just out of our reach, which is a lovely touch. It resurrects the idea that unimaginable things do exist, and that there is more to our world than first meets the eye.

While the first novel in the series follows a more typical boy-meets-girl narrative, Aurabel takes us into new and interesting territory. Dockrill juggles multiple storylines and voices, alongside a few references to the backstory to make this a truly stand-alone novel. She also delves much deeper into the politics of both the Mer and the ‘real’ world, and asks some uncomfortable questions about how we perceive women, beauty and those we consider to be ‘other.’ All of this is handled very convincingly in a story that would be equally engaging to audiences of all ages, with a fast-paced plot that takes unexpected turns.

What’s also notable is the powerful role of women in this book. In the Mer world, it’s the women that either hold power, or are assumed to hold it. They are given more responsibility, to the extent that men in power are viewed with suspicion. This is, of course, refreshing, and it’s important for all readers to enjoy books where women form the vast majority of the cast in a tale that moves far outside the outdated tropes of the ‘romance’ literature often aimed at girls and women. It also shows women being deceitful and violent in order to achieve their aims, and that greed and lust for power are universal, not gender-specific. Having said that, there was still a significant obsession with physical appearance, and a little too much reference to the “creamy” skin of the mermaids, for my liking. What I find best about them is their tails – “tapestries” – that show their moods and reveal things about their past. It’s little touches like this that really bring Dockrill’s world to life.

Although this book has been referred to as ‘fantasy,’ I actually found it incredibly gritty and real

The title character, Aurabel, doesn’t necessarily feel like the main protagonist, but she’s certainly an interesting character. A Mer from the rough side of town (in the sea, obviously), she finds herself in the middle of a political crisis, being used as a pawn to usurp the current king. But, those in power have clearly underestimated her. Left for dead, she uses her impressive, if not under-explained, engineering skills to re-construct herself and to seek revenge on those who have betrayed her. She also ends up playing a vital role in the dangling love story left over from the first book.

Aurabel is undeniably a brilliant character. Her relationship with her female partner seems the most loving and convincing in the whole book, and she is a strong, capable individual who certainly doesn’t need anyone to save her. However, it was interesting to note that, in order to embrace her role as saviour, Aurabel transforms herself in ways typically associated with the male gender. Not to say that women can’t have shaved heads and bulked-up muscles and be feminine, but it felt like the character was sacrificing something of herself, rather than embracing a new identity.

The use of different perspectives works well and adds to the pace and variety of the novel. The plot absolutely whizzes along, and I found myself finishing the book incredibly quickly. I felt the different styles were managed much better in Aurabel than in Lorali, but there was still a tendency to creep into poetic prose in some of the character’s voices, which didn’t always work. Having whole sections from the point of view of “The Sea” cleverly allows Dockrill to have what is basically an omniscient narrator, to fill in the gaps of what the other characters can’t see. It felt a little forced when the sea was still narrating from what was essentially a salty puddle on dry land, but I think it really worked as a device to bring the whole book together.The only narrative thread I found myself rolling my eyes at was the one based on an online forum. Perhaps I’m a little old, but it felt patronising to have the posts so badly spelled and written, as if that’s the only way young people can communicate online.

Although this book has been referred to as ‘fantasy,’ I actually found it incredibly gritty and real, with the story being enriched by the addition of ‘fantastical’ elements, rather than hinging on them. While I loved the ending of the first book, Aurabel’s ending felt a little too neat, considering the richness of the narrative. This is a thrilling book, able to enchant and shock in equal measure that, overall, doesn’t hold with patronising its audience. With its cleverly woven story and engaging characters, Aurabel just might have you peering into the depths, hoping to catch a flicker of a shimmering tail.

Aurabel is published by Hot Key Books and is available to purchase here.

The image is of the book cover. It is a blue background with a mixture of light and dark blue, purple and gold scales over the top which are arranged around the text on the cover. The title “AURABEL” is across the top of the cover in light blue, capitalised font, with the subtitle “A mermaid with a sting in her tail” underneath italic gold font, and the author’s name “LAURA DOCKRILL” underneath in gold, capitalised font.