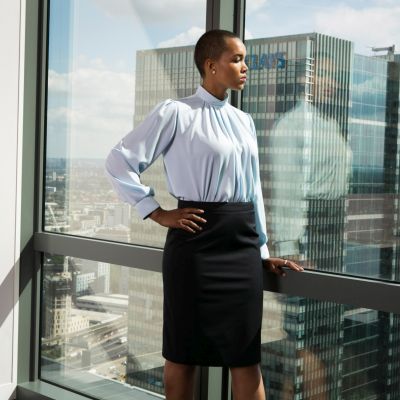 Heidy Rehman is the founder and CEO of feminist womenswear label, Rose & Willard. Prior to this she was a top-ranked equity analyst in the City. Heidy has degrees in Mathematics and Applied Accounting and is a Fellow of the Association of Chartered Certified Accountants. She was born in Newcastle and is proud of her working class background

I left a long, corporate career to set up my own careerwear label. Aside from the fact that I believed there was a gap in the market, I also wanted to do the right thing from an ethical, environmental and equality standpoint.

One of my first decisions was to always show honest and varied images of women. No caricatures, no sexing up and nothing demure. ‘Feminine and bold’ is our mantra.

There is a plethora of evidence that women want to see more diverse representations of women in advertising. However, to my surprise, I found that they prefer not to shop from this imagery.

When I first set out, I decided to be very particular in how I chose models. At first, I decided that I would feature women who weren’t professional models, or ‘non-model models’ as we called them. These were women from various walks of life who we believed female customers could relate to more readily.

Some of the feedback we received was positive but most people didn’t welcome the idea. The most common response was ‘they don’t look like models’. I was rather baffled by this because that had been the objective. However, I did think that this could be less about their physicality and more about how they presented. The main benefit of working with professional models is that they are very comfortable in front of a camera – much more so than our non-model models.

My next decision was to work with professional models but stay true to our ethos. I resolved to feature a broader spectrum of women – women of colour, older women, disabled women, model health advocates and gender non-conforming models.

I also decided to present these women in stances that projected only positive body language. Aside from offering up unattainable beauty standards, advertising photography mostly shows women looking either sexually available or passive. I believe this is one of the key drivers of ‘imposter syndrome’ at work. Women identify with images of other women. If we were to more regularly see images of women who look like us in powerful poses then this should have an empowering effect.

At least that was my thinking.

I was aware that this was something out of the ordinary and might take some time for shoppers to adjust to. But I did not expect women to reject these photos outright.

Female customers refrained from clicking on images of diverse models. To test the results we undertook a number of experiments. One involved sending out a newsletter containing images of two models – one more ‘conventional’ looking (by typical advertising standards) and the other a size 16 model of colour. Both wore the same top and skirt, with the only variation being the colour of the blouse. Over 90% of the clicks for that newsletter were on the first model. Other similar tests yielded the same results.

Data is a very valuable commodity. All companies analyse customer behaviour patterns closely and will look to invest where they see the best return. The data was telling us to not to use diverse models.

An ex-colleague, who was once a booker for a world-renowned modelling agency, told us that models of colour were much less likely to be booked by fashion brands because customers didn’t buy from their images. I hadn’t believed him before but I now had the evidence.

The way we shop no doubt reflects a certain subconscious conditioning that makes us react more positively to images with which we are more familiar.

There is also aspiration. Brands don’t just sell products, they sell lifestyles. Marketing experts have told us that ‘conventional’ models reflect widely-acknowledged beauty ideals and that this is why they are the most commercial.

I found this so disheartening. I didn’t want to give in and I won’t. Because despite this, 80% of women say images of women in the media make them feel insecure. I certainly don’t want to be responsible for compounding this worrying trend.

There is a desire for change. If women and girls can be encouraged to click on and purchase from pictures that show the multiplicity of womanhood then companies will realise the value to their bottom line. They all know that where there is demand, supply must follow.

Ultimately I want women and girls to understand that by changing the way they shop, they could revolutionise an industry and drive businesses to use more realistic and truthful images of women.

As Gandhi said, “Be the change you want to see in the world”.