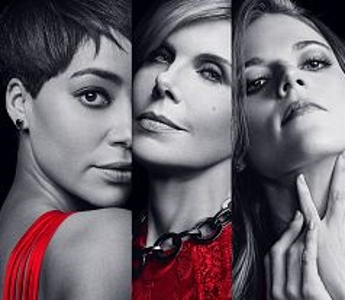 Law, love and the era of the alt-right Spoiler alert for The Good Fight and The Good Wife

Last year, we said goodbye to one of the greatest TV lawyers of our time. As the credits rolled on the final episode of The Good Wife, I couldn’t help but shed a tear. A US TV show which I began watching as something easy and light-hearted swiftly became one of the most intelligent, moving and culturally relevant TV shows I have ever seen.

From episodes focusing on the Black Lives Matter movement and protests clearly modelled on Ferguson, to cases on sexual assault in the military, to the recurring lawsuits involving ChumHum (the show’s Google/Facebook stand-in), creators Robert and Michelle King revelled in the show being current. It never felt old or stagnant and it always brought up issues that were in the public eye. The audience were navigating through these new issues and movements at the same time as Alicia Florrick (Julianna Margulies) and the rest of the firm at Lockhart/Gardner (or Lockhart & Associates, or Stern, Lockhart & Gardner, depending on what season you are on). The world was moving on and so was Alicia. From a particularly painful beginning as the wife of a cheating State’s Attorney, Alicia grows into a new and improved version of herself. The Good Wife grew with her, evolving and changing to suit the current political, digital and social climates, which is why it did so well.

In the same way that The Good Wife was unafraid to comment on the issues of the day, the sequel The Good Fight takes on the same mantra, with added force. The Good Fight opens on a familiar face, Diane Lockhart (Christine Baranski). Politically left-leaning, an outspoken feminist and Alicia’s friend and mentor, Diane is watching Trump’s inauguration. She, like most of the world, is shocked.

This first scene is a pretty good indicator of just how important the Trump administration and the shift towards extreme right wing politics is throughout The Good Fight. Following her premature “retirement” from (deep breath) Lockhart, Deckler, Gussman, Lee, Lyman, Gilbert, Lurie, Kagan, Tannebaum & Associates, Diane ends up joining Reddick, Boseman & Kolstad – a predominantly Black law firm in Chicago. They have a reputation of being the best firm in the city for dealing with police brutality cases – something which becomes increasingly important due to the political climate. Maia Rindell (Rose Leslie), Diane’s goddaughter whose family may or may not have orchestrated a Ponzi scheme, joins Diane at Reddick, Boseman & Kolstad, making them two of the very few white faces fighting the good fight.

Simply dropping people of colour into the background doesn’t warrant a pat on the back for diversity, so it’s a pleasant surprise that The Good Fight also offers a lot in the way of interesting and complex characters of colour

Let’s be clear, The Good Wife did succeed in breaking many glass ceilings, but it was always a very white show. The backdrop of a Black law firm in The Good Fight, with an incredibly diverse cast, goes a long way to righting some of those wrongs. Of course, simply dropping people of colour into the background doesn’t warrant a pat on the back for diversity, so it’s a pleasant surprise that The Good Fight also offers a lot in the way of interesting and complex characters of colour. The only real snag is that we still focus two thirds of our attention on white protagonists (Diane and Maia), despite the focus of the series being Black perspectives on Trump’s USA (something we desperately need).

They are each strong in various ways but they all feel insecure, they have doubts and they are scared for the future

Lucca Quinn (Cush Jumbo), Diane and Maia are the triumvirate of interesting and complex female characters that we need on our screens. The word strong is not enough to describe them, not only because it ignores the need for realistic female characters, but also because it would be false to describe all three of them as simply strong. Yes, they are each strong in various ways but, like Alicia, they all feel insecure, they have doubts and they are scared for the future. They are multi-layered characters who are clearly skilled within their career, but are also desperately trying to get a hold on their personal lives.

Lucca’s career is on the up, but her love life is constantly falling short. Maia’s family may or may not be petty criminals and she is now the target of internet hate and a possible prosecution. Diane’s marriage is 99% over following Kurt’s indiscretion and she has lost her entire life savings due to Maia’s dad’s alleged Ponzi scheme. The three of them have huge battles ahead, but the first season has shown that they are all more than ready to handle it.

As the title suggests, it is Reddick, Boseman & Kolstad, headed up by Adrian Boseman (Delroy Lindo) and Barbara Kolstad (Erica Tazel) who are committed to fighting ‘the good fight’, a principle that is rarely associated with lawyers. While in The Good Wife Alicia, Diane, Will Gardner (Josh Charles) and Cary Agos (Matt Czuchry) may have incidentally fought the good fight, often they were not on the moral high ground. Adrian and Barbara, along with the firm, are dedicated to justice, amplified by the effect that electing Trump as president has already had on the law industry.

Episode three of the series, ‘The Schtup List’ sees the firm attempt to win back a client who is considering changing to a law firm with a more ‘pro-Trump’ stance. They scramble to find anyone working at the firm who voted for Trump, landing upon Julius Cain (Michael Boatman), a familiar face from The Good Wife. He, unlike the rest of his co-workers voted for Trump. This, naturally, starts a cascade of opposing opinions and feelings of betrayal.

In episode six of the series, ‘Social Media and its Discontents’, the firm investigate internet threats and hate speech on widely beloved Google/Facebook stand-in ChumHum. The vast majority of threats come from the alt-right section of the internet, and Julius is compelled to answer for their hatred. Very real divisions start to emerge in the firm – the Trump vote in November was clearly just the beginning.

In true Robert and Michelle King style, the issue of free speech versus hate speech is represented as a seemingly simple one that unravels very quickly. A shoe-in for Milo Yiannopoulos, Felix Staples (John Cameron Mitchell), an alt-right hate speech enthusiast comes to blows with Diane, Adrian and Barbara over his comments in ChumHum’s forums. Circular and infuriating conversations about what counts as hate speech ensue and we are all left scratching our heads. Far from reaching shallow conclusions, The Good Fight tries to show how complicated these issues are and how the internet has changed our way of thinking about hate or threatening speech.

Although the subplot of Maia’s family’s financial scam may not be as interesting or engaging as the other plots, it is a pretty important aspect in the show. Maia is privileged, she’s white and she’s from money. Rose Leslie is wonderful as Maia, timid, yet she has moments of conviction which prove she is a very capable lawyer. She’s young, naive and of course mostly she reminds us of Alicia at the beginning of her journey.

Juxtaposed with Lucca, who is clearly an excellent lawyer, Maia is inexperienced and basically very lucky. Whereas Lucca has earned her place, grafted in bond court and worked her way up, Maia has been given a job due to her connections. What is unique though, is this difference isn’t used to play the women off against each other. In fact, Lucca and Maia grow closer through the series, cementing a friendship which will hopefully grow stronger in season two.

It will be interesting to see whether Robert and Michelle King draw the focus more onto Adrian, Barbara and the rest of the firm in season two rather than continuing to propel white characters to the forefront of a cast who are predominantly Black. A fresh perspective is needed; I would love to learn more about Barbara’s life in the second season and continue to delve into the power struggles competing at the top of Reddick, Boseman & Kolstad.

Invested in the current political climate and unafraid to shout about the big issues, I’m desperate for the next season of the show. Predominantly because it is so refreshing to see multiple complex female characters lead the good fight.

You can watch The Good Fight on All4

Image description: The image is split into three vertical photographs of (from left to right), Cush Jumbo, Christine Baranski and Rose Leslie, who play Lucca Quinn, Diane Lockhart and Maia Rindell respectively. The photographs are all in black and white with each actor making eye contact with the viewer. Both Cush Jumbo and Christine Baranski are wearing bright red clothing. Image used under fair dealing from The Good Fight’s official website, www.cbs.com/shows/the-good-fight/