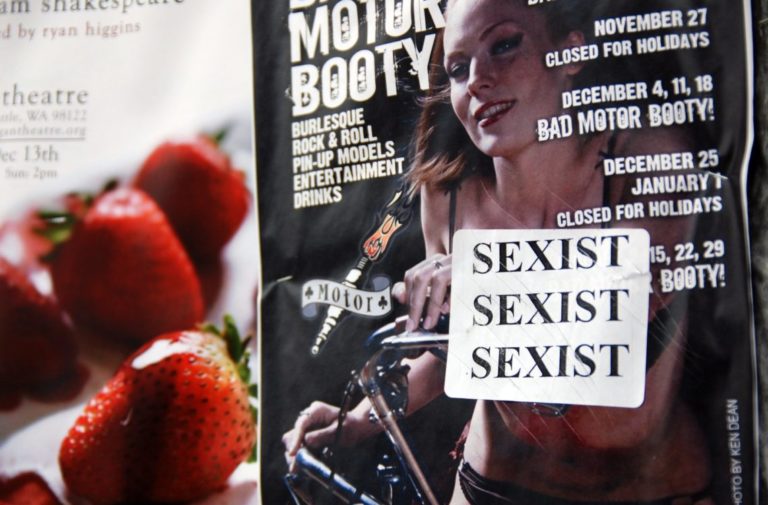 The Advertising Standards Agency, the UK’s advertising watchdog, is planning to ban sexist stereotypes and depictions of unhealthily thin bodies. Report ‘Depictions, Perception and Harm’, released on 18 July (summary here) is a result of an extensive research programme. ASA’s findings won’t exactly be a surprise to anyone who’s paying attention, but their recommendations for further development of their guidelines are interesting if you’re worried about how watching a lot of ads can influence your mindset.

The ASA already has rules in place about several of the more prominent issues relating to the advertising industry’s depictions of gender, particularly women and girls. Overt sexualisation is heavily restricted, especially when inappropriate to the advertisement’s content or involving young girls. There are also already policies in place to prevent depictions of unhealthily thin women (although the baseline for ‘unhealthily’ is still further towards the skinny end of the spectrum than it really should be). Additionally, the ASA has typically ruled that depictions of stereotypical gender roles or advertisements that mock those who don’t conform to them are forbidden.

Their latest report, however, notes that these guidelines have been rather ad hoc and lack a formal classification system, which is possibly why ads like the fat-shaming ‘Beach Body’ campaign from 2015, the absurdly sexualised ‘Game of War’ and similar video game advertisements from recent years and the stereotypical submissive female/assertive male Diesel ‘Bad’ perfume broadcast adverts from 2017 slipped through the net. The ASA considered 1,378 cases in 2015 and 2016, with 912 related to the depiction of women and 465 about the depiction of men.

Advertising as an industry has the potential to cause considerable harm to both adults and children if its messages are misguided or employ sexist stereotypes. It is capable of reinforcing stereotypes and unhealthy body image simply through presentation of an ‘ideal’ body type. People are becoming more aware of this, as well – a report from the charity Girlguiding shows that 93% of girls and young women aged from 11-21 think that “the advertising industry should stop using gender stereotypes of women and men”, 59% have reported pressure to look different from airbrushed or otherwise altered images in the media and 47% have seen “stereotypical images of men and women in the media which have made them less confident to do what they want”. This is the harm the ASA describes in its report – negative portrayals in advertising are specifically implicated in preventing people, particularly women and girls, from living up to their full potential, as well as exacerbating negative body image and eating disorders.

Our review shows that specific forms of gender stereotypes in ads can contribute to harm for adults and children. Such portrayals can limit how people see themselves, how others see them, and limit the life decisions they take. Tougher standards in the areas we’ve identified will address harms and ensure that modern society is better represented.

Despite ASA’s past failures and general reputation as somewhat ineffectual (in an article in The Guardian, Anne Perkins quite rightly lays the many lies of the Brexit campaign at their door, pointing out the loopholes that keep them out of political campaigning), this new report suggests that the agency is going in the right direction. Formalising their existing guidelines will hopefully help stop mistakes like the Beach Body ad from slipping through.

There are also welcome provisions covering stereotypical and negative depictions of gender non-conformity. While not explicitly aimed at supporting transgender, non-binary or gender non-conforming individuals, these provisions are nonetheless an inclusive step forwards. The ASA has upheld complaints against the gambling company Paddy Power for their ads depicting transgender people in the past, although it allowed the Moneysupermarket series featuring men dancing in hotpants despite many complaints, ruling that it was “not mocking”. Once the “gender stereotype” tag was added to their database, 116 ads have been complained about – 83 related to women and 33 to men.

It’s worth noting that the ASA is not explicitly banning gender stereotypes of all kinds, nor is it taking a particularly hard line on depictions with limited potential to cause harm. They aren’t banning all depictions of women cleaning, or men doing DIY tasks, for example (although they are discouraging the “long-suffering mum left to clean up the mess” and “bumbling useless DIY dad” stereotypes, among others).

At present, the Committees of Advertising Practice, the ASA’s sister body, are working on new regulations based on the findings in ‘Depictions, Perception and Harm’, with a public report scheduled to come out before the end of 2017 and training and advice on the new standards coming into force in 2018. These regulations will specifically target advertisements promoting unhealthily thin body images and gender stereotyping, with wider provisions against inappropriate sexualisation and efforts to increase the diversity of people in advertisements and avoid targeting vulnerable groups.

There’s still further to go, of course – loopholes still exist to get around the ASA and it faces difficulty regulating some spheres like online and political advertising. Nonetheless, the formalisation of existing rules should help keep the UK’s already comparatively excellent advertising standards high and reduce the harm caused to new generations of young people (particularly young women) who view them.

Image credit: Taken by Jonathan McIntosh and shared under a Creative Commons license.
Image description:A close-up on a magazine with a topless feminine person smirking and sitting on a motorbike. The person’s torso is covered by a sticker that reads ‘sexist, sexist, sexist’.