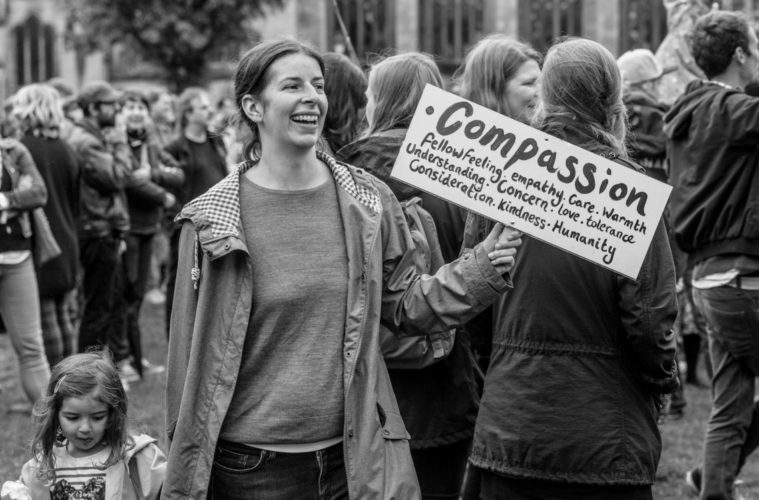 Having compassion online will help you be a better feminist

In an age of what feels like perpetual bad news and division, better feminism relies on compassion and patience online, writes Charlotte Wylie Each week in July, Charlotte will discuss a different element of the ‘toolkit’ she personally uses to navigate the world as a young feminist. This week, Charlotte looks at the importance of having a nuanced, compassionate perspective when online and taking time to reflect before having a knee-jerk reaction

I don’t know about you, but I feel I’ve lived several lifetimes between the beginning of May and the end of June in 2017 alone. Having reinstalled the BBC News app after deleting it in a fit of pique in January, my body instantly tenses every time I see a notification. I feel I’m not alone when I say the past few months have caused me to live my life with a sense of constant background panic.

It is so easy at times like these for us to hide in the corners of the internet where everyone has the same opinion as us and view any opposing viewpoints as either dangerous or ignorant. We pick our sides and draw lines in the sand. This is dangerous not only for ourselves but hinders wider efforts to change things for the better.

In 2016, I found myself repeating one key phrase: “I think it’s a lot more nuanced than that”. Maybe I had watched too much Crazy Ex-Girlfriend for my own good, but I think it was mostly because 2016 was the year I realised that I didn’t hold the definitive opinion on anything.

Yes, it took 27 years for me to realise that I don’t always have the answer.

This isn’t to say that I don’t feel very strongly about things. There have been many major injustices in the past few years and I am definitely ill at ease with the current state of global affairs. Anger and bile are ever-visible in the mainstream media and have engulfed Twitter.

Online, the world is evoked and expressed simplistically so as to distill it into 140 characters or to fit the demands of the 24-hour news cycle. It is easier to conclude that something is bad or impossible if it does not fit into your worldview. It is a lot more difficult to consider that maybe you do not have all the information at your disposal; that another person’s viewpoint is characterised by their unique experiences. We fight on digital battlegrounds, howling that our experience must be the only one that matters because we alone are witness to our unique view of the world.

Social media can be used to mobilise a movement, as seen by the Women’s March in January. It can also be used to instantly broadcast our hurt and pain or our seething resentment or our anger. This doesn’t always allow space for one to decide how they really feel about an issue. It can feel like there is not enough time to read the context and to look at all sides and evaluate.

This nuanced, compassionate perspective is particularly important for young feminists. A couple of years ago, I went to the Feminism in London conference and was struck by how many differing opinions there were in the discussions. Naively, I assumed everyone was going to have the same opinion on certain issues as me and it did take me a minute to properly listen to these viewpoints and reserve my judgement. I found this was the case in particular for the older generation of women at the conference, whose experiences growing up were so very different to my own. I still didn’t necessarily agree with everything that was said, but it made me appreciate that while there are certain issues that universally matter to women, the order of priority wildly varies from person to person based on their own unique set of experiences and perspectives. And that is something to celebrate rather than condemn.

The journalist and activist Naomi Klein recently spoke about her experience helping to create The Leap Manifesto, aimed at combatting climate change and fighting for Indigenous rights in Canada, saying that if you agree with every opinion in a room, you haven’t got enough perspectives involved. In order to address any issue and actually make substantive change, we have to allow all perspectives to have their say and listen openly.

I’m still going to add my voice to the crowd when I feel passionately about an issue. But I’m also going to take a minute, breathe and try to look at the issues from all sides.

Feature image is by Matt Gibson on Flickr. It is a black and white photograph of a crowd. At the forefront is a smiling adult in a raincoat, holding the hand of a small child. The adult is holding a sign that is titled, in large script, “Compassion”. The rest of the sign reads: “fellow feeling – empathy – care – warmth – understanding – concern – love – tolerance – consideration – kindness – humanity”.

Second image is by Andrew Worley, from Unsplash. Used under Creative Commons Zero licence. Image is of a silver keyboard being held out to the camera against a blurred yellow brick wall. Only the forearm and hand of the person holding the keyboard is visible. The person has a colourful tattoo on their forearm.