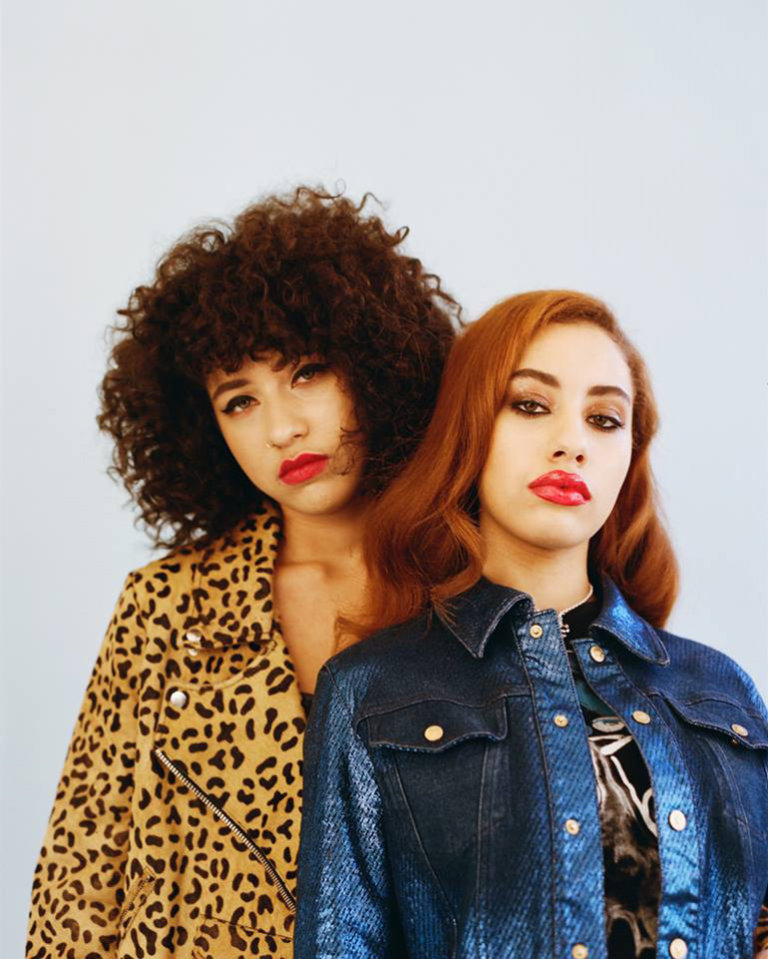 “We would die for our activism” From the outset, it’s clear that Skinny Girl Diet aren’t afraid to wear their feminist credentials on their sleeve. The front cover of their debut album Heavy Flow, released in September 2016, features the three women standing tall and proud in white dresses, with menstrual blood stains on the front of their clothes. While the band seem to easily fall within the Riot Grrrl genre, they make the accurate point that as a band featuring women of colour, they would not have been part of a historic scene that has been subject to heavy criticism for its lack of intersectionality and inclusivity. Despite their punk sound and being “brought up on a DIY ethos”, they reject any labels, describing these as “limiting”.

The band was formed in 2011 by sisters Ursula and Delilah Holliday and their cousin, Amelia Cutler. Their name was inspired by the tag #skinnygirldiet which Delilah came across while scrolling through Tumblr. The band are critical of the diet industry and their name is a commentary on this.

I put some questions to Ursula from the band by email. Here’s what she had to say.

Skinny Girl Diet have a strong, feminist image, which is really heartening to see. What does feminism mean to you?
Feminism is activism for equality. It is a movement that includes anybody that wants to achieve this. Feminist rights are trans rights as well as racial rights within the fight for equality for all. Feminism is a term for a wider scale of issues that people have been facing. Nobody likes to talk about the term “white feminism” that seems to have become a popular way of describing an alienating upper-class privileged view, or people like the women that voted for Trump, yet claim themselves as feminists, but disregard issues such as female genital mutilation (FGM), cultural appropriation, violence and rape within refugee camps, or the fetishisation and exoticism of Black and Asian women. Nobody likes to talk about how even some second wave feminist revolutionaries believe that feminism is trans-exclusionary. Some feminists also believe it’s part of perpetuating gender roles to wear make up and wear “ultra feminine” clothing and that you aren’t fighting for feminism if you still like the colour pink. However, it’s all your choice; we’ve been fighting in history to even have this voice that we’re allowed to have now. It’s not about infighting within feminism. It’s obvious but also needs to be addressed that not all women are the same, especially in their politics.

Feminism should be a space for all women to feel safe

Feminism should be a space for all women to feel safe. If they aren’t included, it’s off-putting. There’s even an element of class division within feminism and it needs to stop.

If somebody slips up voicing a feminist view with, say, the wrong terminology, they instantly get corrected or deemed like their say is less valid or “problematic”, when some people who are raised in poverty without access to resources (or a handbook of the latest set of big words to use) but want to express their fight for equality should be allowed to do so without getting shot down. Feminism should be a focus for all – it was an escape for me personally, as I wanted to help other people feel represented as there aren’t many mixed race women making guitar music (or at least aren’t getting the exposure), and do my bit in helping, whether that be playing a fundraiser for injustices, spreading awareness for those injustices or inspiring a girl like me somewhere to learn how to play an instrument and hopefully one day completely slay a predominately male-dominated industry.

I think it’s all about creating and, hopefully, surrounding yourself with enough like-minded people from all backgrounds to help fight for equality and human rights, not about ego or just using feminism as a capitalist marketing ploy to get women on side or saying there’s a certain rule book to feminism. If people agree with our views, you’re someone with the same beliefs as us, a comrade. We would die for our activism. Everyone has a right to think for themselves, as long as it’s all in the name of what feminism stands for: equality for all.

You’ve previously spoken about the sexism and racism you’ve experienced as a band. As you’ve become older and more established on the music scene, is this something that has relented or are you continuing to face the same challenges as before?
Maybe I’m just used to the whole thing, but I feel like due to the “image” we’ve put out there, people know that we don’t stand for that shit. We’ve also been playing way more shows run by lovely people with a predominantly non-binary, queer, LGBT punk ethos, so I haven’t experienced any recent sexist debacles. The everyday experience of getting to a gig, catcalls and sleazy approaches is something that, horribly, is no surprise anymore, but we usually give them the middle finger. I think we’ve probably built a wall against any racial or sexist themed remarks: throw them in a mental bin and incinerate.

On the track ‘Okay’, you talk about refusing to give up. Is this a song about resilience and, if so, how do you stay resilient, both as individuals and as a band, in a frequently hostile music industry and society?
Delilah writes most of the song lyrics. It’s a hard thing to have resilience in such a hostile industry. We’ve seen ourselves get ripped off – the industry try to create a less “challenging” version of us and band members of those industry-made bands come to our live shows. It’s flattering to see, but when you see the masses of money behind those acts … to pretend that they are unsigned like us, it’s enough to make you scream. Thankfully, we’ve got songs that allow us to do so.

What keeps us going is pretty much the fact we would die for this: art is expression and expression is like the oxygen we breathe. This isn’t just some slapdash quick ploy to get some sort of success. Everything we create, we put our whole being into. I [Ursula] call what Delilah does every time we play a gig “putting her heart on a platter” for the audience to see – exposed, intimate and hard work. It’s frustrating seeing people who barely even gig anymore and rely purely on PR and hype. We value our craft as it’s dying out. We’re trying to save guitar music and do something no one’s ever done before. The key to survival is to channel everyone else out and focus – just do you.

Amelia has left the band! Can you tell us more about this?
She wants to do a normal job, so she quit on us! She’s self-proclaimed as the clever one – she’ll be sticking it to the man from the inside. There’s no bad blood, even though that gossip would be juicy as hell. The rock’n’roll lifestyle just ain’t for everyone, ha ha.

Looking ahead to the future, what are your goals, dreams and plans?
The goal is to keep evolving, to try and get to the USA as we’ve never been and to always keep those following us on their toes.

The image accompanying the piece is an upper-body shot of Delilah (L) and Ursula (R) from the band. Delilah has gorgeous brown curls and wears a biker jacket with a leopard print and bright red lipstick. Ursula has lush, long, red hair with waves and wears a blue sparkly jacket and bright red lipstick. The pair stare unapologetically at the camera and look fab. Picture used with kind permission of Skinny Girl Diet.