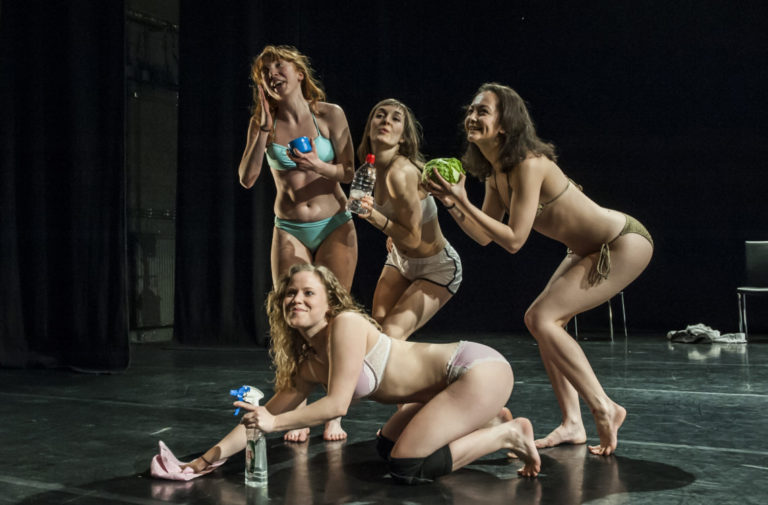 The F-Word is back at the Edinburgh Festival Fringe in 2017. We’ll be posting reviews all the way through the festival.

Shame is a one-woman show written and performed by Belle Jones, which explores the concept of shame in modern society. There is a digital cast that appears alongside Jones, projected onto a screen from which glowing wires extend, suggesting the interconnectedness of real-life action and digital experience.

Jones plays Vicky, the single mother of teenaged Keira. We see Keira interviewing her mum and gran for her vlog. There’s a clear generational difference between the older characters’ experience of the digital world and (in)ability to handle it as opposed to the ‘digital native’ Keira, which is illuminating and at times funny. Then things take a darker turn: Keira goes to a party and two days later she disappears from school as images of her having sex with two older boys are widely shared on the internet. That Keira could quite possibly have been raped however remains unexplored in the play.

Shame attempts to deal with complex and difficult questions and there is much to love, but I think it also needs to also look at the wider social and cultural conditions that make women feel ashamed of their sexuality in the first place. If nothing has changed in the course of three generations, then we haven’t come very far… Jessica Fostekew: The Silence of the Nans (Comedy)
Until 26 August, 16:00, Just the Tonic at The Caves
Reviewed by Rachel Murray

Jessica Fostekew’s set is a seamless mix of bang-on observational comedy and a vivid re-telling of her disastrous experience of gigging on a cruise ship. With some lively character impersonations, Fostekew makes it easy for the audience to imagine the farce of her cruise ship encounter: her comedy style wildly mismatched with the tastes of a grand ballroom full of conservative older people, who would have preferred Celine Dion covers and hackneyed recycled gags.

It’s clear that Fostekew is a feminist at heart and there is some very relatable commentary on motherhood, such as the irony of feeling at once trapped by, but also loath to leave your newborn baby.

In discussing the emotive breast versus formula feeding debate, she observes that some mums are “a bit smug” about breastfeeding and suggests that if they think it’s so wonderful, maybe they just haven’t had a good night out on recreational party drugs. Although I admittedly laugh, I can’t help thinking that this type of joke falls into the trap of pitting women against each other.

That said, this is a strong set from a comedian who owns the stage with her hilarious character sketches and solid storytelling.

A multifaceted, funny piece of performance that combines physical theatre, movement, dance and spoken word to express how it feels to be a young woman in 2017 Holly Morgan’s debut Edinburgh performance is slightly provocatively titled Seven Crazy Bitches. She has enlisted her boyfriend as her sidekick with him relegated to a barrel at the side of the stage – so far, so good. She then explains the seven ages of man with the visual aid of Justin Bieber pictures, which may sound funnier than I actually found it.

Morgan re-tells the seven ages from the point of view of women – from being born a little girl, to being a ‘crazy’ teenager and so on. Personal episodes about bad dates are interspersed with a selection of popular songs by female icons with an intentionally trashy DIY aesthetic. It is light-hearted and most of the audience seem to be having an enjoyable time. There is an occasional funny aside about Morgan’s middle-class upbringing and alcoholic mother, and her boyfriend is regularly literally and metaphorically put back in the box.

On the whole I’d say that Morgan is a great singer; she’s funny and engaging, but the show seems to be riding more on the feminist zeitgeist rather than coming from a real place of feminist thought and interrogation. I know it’s comedy – it’s meant to be light-hearted – but it simply left me feeling a bit untouched. A feminist revelation it ain’t. This Really Is Too Much (Theatre)
Until 27 August, 15:20, Underbelly, Cowgate
Reviewed by Flora Herberich

This is an exciting new work by a young female artist collective. This Really Is Too Much is a multifaceted, funny piece of performance that combines physical theatre, movement, dance and spoken word to express how it feels to be a young woman in 2017.

The show cleverly asks questions for a young generation of women who have “never had it so good”. It doesn’t follow a linear storyline, but expresses experiences and worries about topics as varied as the economy, the female body, the employment situation for young people and the pressure to look beautiful or conform to a certain type. How and when are (young) women allowed to speak, when they are constantly put in situations or clothing that diminishes their voices? There is a recurring motif running throughout the show – a certain piece of music begins and all four performers assume assigned positions: from posing in a bikini with a green salad to scrubbing the floor.

Gracefool Collective are inventive movers and often juxtapose physical imagery and sound or voiceover to express the contradictions they or other women encounter. There are a couple of moments where the choreography is a little stilted but, overall, there is a good flow to the piece.

I’m delighted to see a young promising company making serious work and being supported by Underbelly Untapped as well as other arts organisations and producers. These young women want to be taken seriously and the older generation is listening.

Image 1 is of Jessica Fostekew. Fostekew looks directly at the camera and looks as if she might be tired, annoyed or perhaps confused. She wears a blue shirt with bright flowers on it and the background behind her is bright yellow.

Image 2 is of Holly Morgan standing on a bed in a dark dress and black top hat and looks like she might be singing. A figure stands to the left of her, he is wearing a black hoody with a white Shakespearean-style ruff around his neck. He is holding a hairdryer up to Morgan to throw her hair back.

Image 3 (and the feature image) is of the Gracefool Collective. There are four women on stage. None of them are wearing very much, bikinis, underwear, shorts. They are all posing and looking towards the audience. One is on her hands and knees scrubbing the floor, one is holding what looks like a cabbage or a lettuce, one holds a bottle of water and one holds a tub of cream which she is miming rubbing on to her face.