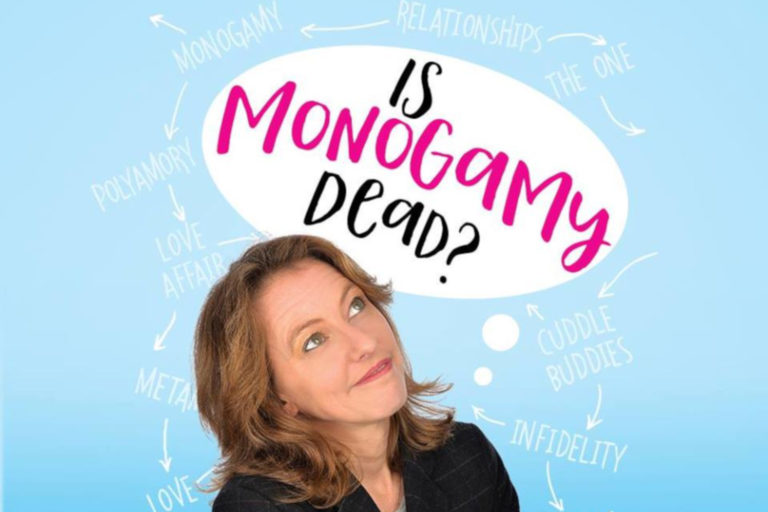 Non-monogamy is a topic that deserves more attention from writers. In the unlikely event that people have read a book about it, it is almost always The Ethical Slut by Dossie Easton and Janet Hardy. Published two decades ago, it’s still viewed as the authority – and, in my opinion, it’s terrible. I would really like something I can recommend enthusiastically to friends, acquaintances and internet denizens, given how rich and complicated the topic, and how misunderstood non-monogamy is.

I was excited, therefore, to read Rosie Wilby’s new book, Is Monogamy Dead?. Wilby comes to the subject from an interesting standpoint: normally a serial monogamist, she has more recently been pondering on non-monogamy. That means this isn’t a book written by somebody who’s spent years living polyamorously. Wilby’s position might make it more accessible to much of the book’s potential audience, who I imagine will often not be non-monogamous yet, but might be curious and come from a similar beginning position as Wilby herself. Thankfully, however, the book also avoids treating non-monogamists as aliens or creatures in a zoo, because of the closeness of Wilby to the topic.

I’ve been in open relationships for a long time, so the book is perhaps less aimed at an old pro like me. Nonetheless, there were still passages that introduced me to new ideas or ways of thinking about things. I found the concept of a “relationship escalator” (attributed to Meg-John Barker) quite compelling: the idea that relationships are often viewed as needing to be continually moving and going in one direction only, which can lead to feeling pressured to achieve certain landmark moments. This pressure clearly has the potential to be lessened with multiple romantic relationships – though of course there are other ways of addressing and challenging this way of thinking.

Similarly, I wasn’t very familiar with “relationship anarchy”. Wilby explains: “A typical relationship anarchist would simply make no distinction between their different types of multiple connections. Normative categories such as ‘just friends’ or ‘in a relationship’ were gleefully dispensed with. All emotional intimacies had value.”

It’s a good reminder that non-monogamy is not a single alternative to monogamy, but many. It puts me in mind of this attempt to map different types of relationships and dynamics.

This idea is also exemplified by interviews and conversations Wilby reports with those who have shared information with her about their relationships, non-monogamy and views. These are the bits that I can imagine being most helpful to the not-yet non-monogamists. People give insight into how they got where they are, why they decided to construct their relationships how they have and what has worked (and what hasn’t). It’s also one of the aspects that makes it clear that those who have chosen alternatives to monogamy are perfectly normal and are able to have very fulfilling relationships.

However, despite covering some thought-provoking ideas and ensuring there are non-monogamous voices heard, Is Monogamy Dead? is far more autobiography than reference text. Wilby maps her path through relationships and how she started questioning monogamy. Almost the entire second half of the book covers her specific experiences in detail. It’s an odd decision. It’s clearly an intensely personal story, but even then I would have expected her to use this as a framework for exploring her purported topic. The level of focus on her past and present relationships instead feels like a tangent.

Is Monogamy Dead?’s biggest problem is not knowing what it is for

The aforementioned lack of literature around non-monogamy is also a problem for Wilby (and might be why she feels the need to take such a personal approach to the topic). In the first few chapters, she attempts to demonstrate some authority on the topic, but is stymied by this research desert. Not to be deterred, she conducts her own survey. When she first mentioned this, my heart sank as I realised it only consisted of responses from 100 people, who appear to be primarily from her own network. Clearly unrepresentative, a point acknowledged by Wilby, she nonetheless continues to refer to the results throughout. Some of the comments she collected through the survey are illuminating (similar to the interviews she conducted with various people along the way), but mostly, the survey results are simply anecdotes disguised as statistics.

Elsewhere, Wilby’s attempts to theorise about non-monogamy using gender leave me uncomfortable. On the one hand, it’s refreshing to have a book (fiction or non-fiction) where the majority of romantic and sexual relationships are between women, and most of the time Wilby approaches this in a very matter-of-fact way. This is, after all, her life and experiences. But there are occasions where she tries to intimate that these experiences are particularly valuable in understanding non-monogamy because of gender. Talking of relationships between women, she writes:

We are the ones who hold vital intelligence about what women get up to in relationships with no men around to muddy the picture. Perhaps we reveal something about what all women actually want and how straight women might behave if they could.

It’s a confusing chapter. Wilby herself mentions numerous lesbian and bisexual women in relationships who take different approaches, meet different challenges and have different expectations of each other. It’s clear, surely, that women are not uniform and it is simplistic to categorise the relationship needs of people along a gender binary. Where there are commonalities among women (or men) there should be a high awareness of the impact of societal expectations and messaging. In fact, this should be central to the book as a whole, given that monogamy itself is a deep-rooted societal norm and one of the biggest challenges to people considering non-monogamy is societal disapproval.

Is Monogamy Dead?’s biggest problem is not knowing what it is for. At this point, I don’t think it contains enough information to be a truly helpful resource for the curious. Despite this, it holds charm as a book that comes from a very honest place and covers a topic from a perspective that is seldom voiced. It is a worthwhile read for those interested in the question of monogamy.

Is Monogamy Dead? by Rosie Wilby is published by Accent Press and is now available to purchase.

The image used is the cover of Is Monogamy Dead? by Rosie Wilby which was found on Goodreads.com. It shows the author of the book Rosie Wilby with her arms crossed and a thoughtful expression on her face. Above her head is a thought bubble featuring the title of the book. The background is blue and features a number of words related to relationships connected by arrows, such as ‘The One, ‘Infidelity’, ‘Sex’ and ‘Cuddle Buddies’. The author’s name appears at the bottom of the cover and at the top is a quote from Sara Pascoe which reads: “My favourite way to learn is when a funny, clever, honest person is teaching me – that’s why I love Rosie Wilby!”