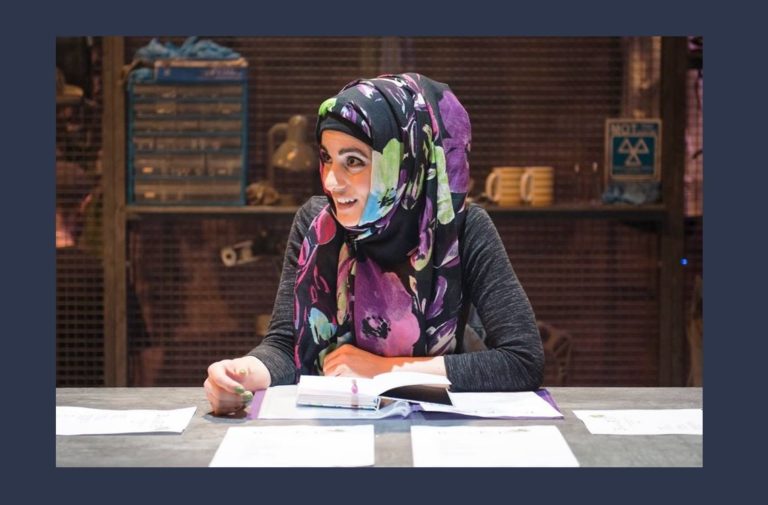 Held annually by London’s Royal Academy of Dramatic Art (RADA), the RADA Festival is a celebration of exciting new and emerging companies and performers.

Part of the festival this year is a panel featuring female creatives who discuss the importance of challenging stereotypes and inaccurate perceptions of women within society, as well as the political and educational roads that can help to do so. The event, Offending Women, is led by [email protected], a grassroots collective founded by Natasha Rickman, Rhiannon Oliver and Melanie Jessop, and run by RADA students and graduates.

Jessop is on the panel for the event alongside two playwrights also in the festival, Deidre Strath-Clyde who wrote The Lizzie Play and Lily Bevan, writer, director and performer of Trump’s Women. Also speaking are Sara Joyce, director of The Scar Test and Anna Herman, head of education at Clean Break, a women’s theatre charity that brings imprisoned women’s stories and experiences to light.

The room is filled with women of various ages and three men, including me. There is a strong feeling of security and empowerment as is so often the case when a group of like-minded individuals come together and talk about the need for change. Hands shoot up and questions are eagerly thrown at the stage, and discussion is sparked between audience members.

There’s an amazing feeling of unity, excitement and a desire to change the world one step at a time

Two individuals sitting next to one another disagree when the topic turns to the position of younger women within society and their awareness of feminism. Does the sheer increase of information available through social media, for example, help to strengthen their connection to the women’s movement, or are TV popular shows such as Love Island sending skewed messages about the formation of identity?

Other topics of discussion include Donald Trump (of course) and the “overwhelmingly disgusting relationship between him and women” as it is described by Bevan . Trump’s Women tells real stories from women who have been ridiculed in person by the US president. Bevan “couldn’t keep up with his constantly ridiculous rhetoric as there is just not enough space in the programme”.

Joyce’s play The Scar Test is based on interviews with women who have been detained at Yarl’s Wood Immigration Removal Centre, a place rife with sexual assault, abuse by officers and racism. Joyce explains that despite the many stories that have made it outside its walls, much has been “smothered by the press”. Like Bevan, she aims to use this play to give a voice to those women affected.

Much of Offending Women is spent with Herman and Elle, a Clean Break graduate, who passionately describe the charity’s work. Elle explains that their work “doesn’t conform to expected stereotypes” and it is profoundly clear how much her involvement with the company has helped in her journey. She tells us of her struggle with depression and how women are largely ignored in prison, but that through Clean Break she has discovered that her voice really does matter.

Offending Women feels like a safe haven for all of its participants. There’s an amazing feeling of unity, excitement and a desire to change the world one step at a time.

The RADA Festival has long been an extraordinary platform and conversation starter but this year feels more exciting than ever, particularly with another show I had the pleasure of seeing, Combustion, which explores ways in which women can subvert religion and expected norms.

Combustion is a phenomenally open-minded piece that refuses to take sides. For example, Samina draws on the momentous legacy of strong Muslim women when she attempts to mentor racist Andy in an effort to open his mind

Combustion deals with four people living in Bradford in the month of Ramadan and while the subject of terrorism isn’t dealt with directly in the play, the ramifications of Islamophobia are. Early on in the play, the sole female character Samina (Shireen Farkhoy) exclaims “There was no such thing as Islamophobia a few years ago.”

Addressing history, religion and the effects of mass propaganda, Combustion leads the audience on a journey that ends with them seeing and better understanding how young British Muslims are affected by events that are completely out of their control, and the characters’ already fragile sense of identity can be catastrophically damaged further.

Like many of the festival’s shows, Asif Khan’s debut play Combustion is contained in an intimate studio space. Director Nona Shepphard has made sure that the audience are present in the moment and ready to listen. The story follows Shaz (Beruce Khan) the owner of a local garage, his friends and employees Ali (Rez Kempton) and Faisal (Mitesh Soni) and his sister Samina.

Comical opening scenes mark the end of Ramadan: the boys hungrily devour takeaway, clearly not even tasting it. A racist far-right group have seized on to a grooming scandal widely publicised in the media and plan on marching through Bradford in an effort to place fear in the city’s large Muslim community while Shaz struggles to keep his business afloat in hopes of marrying well. The strong-willed, determined Samina attempts to empathise with both sides of this ‘war’.

Mila Sanders’ set creates far greater impact than should be possible given the lack of space she has to work with. Khan’s writing allows the characters room to breathe and grow while the excruciatingly intense scenes between the siblings stay with me long afterwards.

The tone is for the most part playful. It would be easy to take the light-hearted, affectionate teasing of Faisal and Samina’s defence of him as cliche but Khan treats us to so much more than the predictable. Combustion is a phenomenally open-minded piece that refuses to take sides. For example, Samina draws on the momentous legacy of strong Muslim women when she attempts to mentor racist Andy (Nigel Hastings) in an effort to open his mind.

The play also touches on some stereotypes of Muslim women. Samina, whilst evidently confident with the male characters, is still viewed as in need of protection, especially by her brother Shaz. She initially appears to conform to what seems to be traditionally expected of her as she tells Ali she plans to marry a doctor. We then learn of her true plans to improve life for the Muslims in Bradford.

What is so striking about this piece of theatre is how it takes any question that could be thrown at it about religion or gender and gives a clear answer. In a particularly important scene, Andy angrily explains his views on the Qur’an to Samina. The grooming and multiple rape of a 12-year-old girl by a group of men, all whom are Muslim, according to the newspapers, has incensed Bradford and has Andy blaming the Qur’an. He tells Samina that this incident has happened in the present day because the Prophet Muhammad’s first wife, A’Isha, was nine when they married. Samina retaliates, explaining A’Isha’s place in history as a woman who was powerful in her own right.

Recent incidents of hate crime demonstrate turmoil in the UK. Influence from the media on people such as Andy can validate and encourage racism but ignorance is not in and of itself evil and sometimes education is the best course of action, as Combustion shows.

Too often in theatre, characters that are marginalised, or rather not heterosexual, white and male, are treated appallingly and if they attempt to create a voice for others like them are killed off. Too often they are denied a happy ending. This is not the case in Combustion. Here, theatre has given us hope that anyone, anywhere, can be happy and can make others so. As with Offending Women, we are shown the possibilities of open discussion, exploring female identity and the dangers of stereotyping. Here’s to next year.

The image is a production photograph of Shireen Farkhoy as Samina in Combustion . She sits behind a table with a book open in front of her. She is looking to the right, smiling a little and wearing a black, purple, blue and green headscarf.