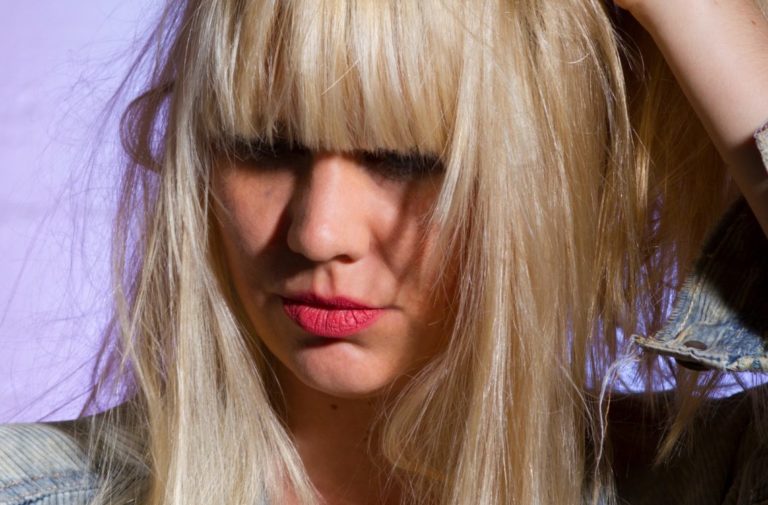 Erika Michelle Anderson, better known by her stage name EMA, is an US singer-songwriter and multi-instrumentalist from South Dakota (state motto: “Under God, the people rule”).

Previously the lead singer of band Gowns, her new release, Exile In The Outer Ring, is her third solo studio album and was co-produced with Unknown Mortal Orchestra’s Jacob Portrait. When I first hear the title, I remember it as “Exile to” rather than “in” but on listening to them this is undoubtedly a set of songs firmly at home “in” the outer ring, not on a journey into exile, but already established and living in it.

Opening with a sea storm of distortion which is then topped by raw clear chords before the lyrics kick in, the opener, ‘7 Years’, sets the time and space for this album. “I felt sure I’d be judged, this is between me, God and Satan.” EMA’s voice sounds both ethereal and world weary.

Themes of sex, death and religion are prevalent; lyrically recurrent appearances by God and Satan (good/bad, light/dark), blood (and chalk), the elements and planets, help connect and cement this diverse set of songs into a collection, an album.

I don’t have any personal experience of the suburban landscape of the Midwest, so I may be missing some of the judgement (from the inner city to the outer or is it the other way around?) that’s raging here, but some of this anger and chaos is certainly transferable and relatable to. Wherever we find ourselves located, there can be a feeling of being disconnected from a vast sprawling landscape or distant skyline, or a feeling of being alone when driving along busy streets in crowded towns.

It has that 3am witching hour feel, where strange occurrences and dangerous situations seem less surprising than perhaps they ought

This is an album that is musically hypnotic, sweet and melodic, almost lullaby-esque in places, before it twists and hurtles the listener into the harsh distortion and heavy discordant strumming of noise pop – the mid-1980s born subgenre of alternative/indie rock, which mixes dissonant noise and feedback with the type of songwriting more often found in pop.

Reaching track four, ‘Down and Out’, (currently EMA’s most streamed track on Spotify) is a moment to relax and enjoy the album’s lightest song. It’s musically uplifting, with its knee-bouncing rhythm, almost a reggae beat, albeit with an underlying sense of hopelessness with the pre-chorus line: “but what are we hoping for?”

Although these songs feel deeply personal, they are steeped in a sense of the place and the people who inhabit it, rather than that of any one individual. They paint a picture of a disturbing world, a world where it’s hard to imagine it ever being a long warm balmy afternoon – harsh bleaching sun and neon lights certainly, but never just a pleasant unremarkable day. It has that 3am witching hour feel, where strange occurrences and dangerous situations seem less surprising than perhaps they ought.

The album closes with the eerie spoken word ‘Where the Darkness Began’, which is underpinned with a very subtle, slowly building, pulsing tune which continues long after these, the final lyrics:

My favourite songwriters are those with the ability to write a melody strong enough to carry some serious weight lyrically. One complements the other and a delicate balance is kept between being thought-provoking and enjoyable without tipping into being preachy and pompous. EMA does this beautifully here, with insightful lyrics that coupled with often catchy tunes are a pleasure to listen to.

I recommend listening to this whole album, but if I had to pick three tracks as a sampler they would be ‘7 Years’, ‘Fire Water LSD’ and ‘Receive Love’.

As luck would have it, EMA is part way into an extensive world tour, so I headed down to her London show at Oslo in Hackney on 3 October, curious to see how this quite production-heavy album will translate to the live scene.

It does it well. Somewhat rockier in the flesh, with Erika M. Anderson on guitar, joined by two excellent musicians: drummer to her right and multi-instrumentalist (violin, bass, synths and effects) to her left. It is loud, brash and tight musically.

They open with the album’s spoken word final track, before belting into ‘I Wanna Destroy’. Songs from Exile In The Outer Ring make up the bulk of the set and are eagerly received by the audience, many of whom have clearly listened to and enjoyed the new album already. The room is full, but not overly crammed and there is a sense of real excitement in the air, along with a lovely band-audience-band connection. The setlist runs:

A mention must also go to the wonderful opener Dubais, who enchants us with her warmth, electro-pop tunes and powerful vocal, sometimes using her mic, sometimes putting it aside and just singing unamplified to us.

Exile In The Outer Ring is out now on City Slang.

Image of Erika M. Anderson by Alicia Gordon courtesy of Stereo Sanctity. Image shows Erika wearing a pale blue denim jacket. She is looking away from the camera and her long blonde hair is hanging across her face