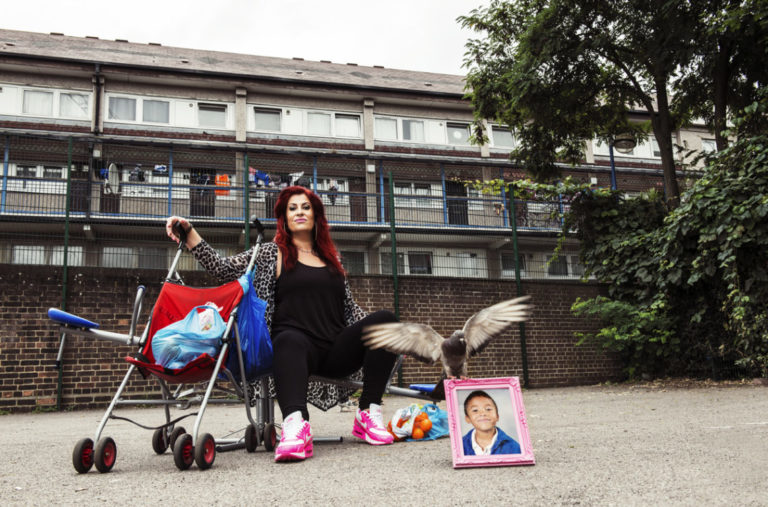 The mums are all right

Muvvahood is not your typical theatre show. Written and performed by real-life parent, Libby Liburd, it feels non-traditional both in the way it’s presented and its subject matter. There is no doubt that Muvvahood achieves its aim: to challenge society’s preconceptions about single mothers, particularly those who are working class. Liburd describes the stereotype of a single mother as “a teenager wearing a tracksuit, smoking a fag, pushing a buggy, on her way to Lidl with her ASBO children that live off cheesy chips (and the taxpayer) and must be rescued by Jamie Oliver.”

Muvvahood initially feels like a combination of standup comedy and an episode of Question Time: it’s full of clips of politicians, alongside Liburd’s thoughts delivered with her infectious personality. The second half is made up of monologues drawn directly from other mothers’ real experiences.

The show is described as “part standup, part TED talk and part verbatim theatre”. It manages to be all of these things while maintaining a sense of coherence, a natural flow and constant audience involvement. It’s clear that the work means a lot to Liburd and this personal connection helps the audience to understand issues that are so often cast by politicians and the media in terms that imply they only affect a homogenous unknown group. Liburd makes the point about the othering done by MPs and the media repeatedly throughout the play.

The political and personal intertwine effortlessly. Liburd is anything but reserved; she’s enthusiastic, open, warm and brings a strong sense of personality to what could have been boring, statistic-filled lecture. The venue has a ‘babes in arms’ policy, well-taken advantage of by the audience, and there are occasional but regular sounds of wailing babies. This audience is likely to relate in some degree to the issues raised in the piece and Liburd expands on them well.

Such is the power of Liburd’s acting that I only realise a few stories in that the tales have been gathered from many single mothers and are not just her own. Her delivery adds to what are already moving narratives

Liburd is quick to point fingers and although those fingers are mostly pointed in the right direction, she does make some generalisations. My one criticism of the show is that there is the occasional glib or throwaway remark. Liburd is intent on uncovering the stigma against single mothers and she is right to blame the media and politicians, but I think she could be somewhat more nuanced in her argument. Explaining why it might serve politicians to put blame on single mothers, or exploring which particular aspects of the media are most guilty of this, would carry more weight than claiming that everyone is equally to blame. For example, saying that the financial disempowerment of single mothers is down to “right wing propaganda” sounds a bit simplified.

The show includes a clip from Question Time of a woman yelling at the MP Amber Rudd. Rudd does not respond, which serves to emphasise Liburd’s point about the inability of politicians to understand and engage with real and prevalent problems of the general public.

One of the show’s greatest strengths is how interactive it is. Not only is Liburd’s voice joined by crying babies, which adds to the sense of camaraderie in the venue, she also cleverly uses the audience to make her points. A particular highlight is when she gives a woman sitting on the second row her own purse and then asks her to take out £7 to give to another audience member; Liburd then calculates the various taxes that need to be applied and demonstrates that if this were a child maintenance payment, the recipient would ultimately receive less than the £7, showing the ineffectualness of the laws around child maintenance.

Statistics are followed by personal stories. Such is the power of Liburd’s acting that I only realise a few stories in that the tales have been gathered from many single mothers and are not just her own. I think she is talking about herself because it seems so real. Her delivery adds to what are already moving narratives. Liburd raises interesting issues of what is acceptable and what is not in our society. She makes the point that being a single mother, in what society would deem a ‘broken home’, is simply not accepted. This reminds me of what J. K. Rowling wrote about similar issues in an article for Gingerbread: “87% of single parents think there is a stigma around single parenthood that needs to be challenged and one in three say that they have personally experienced it.” That article was written in 2010 and I can’t help but think that little has changed.

There is a video on the Guardian website from 2015 in which Liburd expresses her views on this matter. She mentions Vicky Pollard, a fictional character who embodies every stereotype that exists about single mothers. Pollard, an imaginary individual, was unbelievably used by MP Michael Fabricant as an example of why single mothers have negative impacts on society.

Liburd may employ statistics and politicians’ quotes to convey her message, but these numbers and words never feel preachy, rather an emotional outpouring. Liburd clearly grasps the fact that props, laughter and interaction are a better way of entertaining and instigating change than angry ranting for an hour.

Liburd leads by example; she says that all of the single parents she knows have their scars, bumps and scrapes “but we ain’t broken and we don’t need fixing”. What better example of this is there than Liburd herself?

Muvvahood is at Mirth, Marvel & Maud in Walthamstow on 23 November and the Pleasance in north London 30 November – 1 December.

Image one, the feature image, is the publicity shot for Muvvahood, credit Kasia Burke. Liburd is sitting on a see-saw outside a block of flats. She has a pushchair, bags of shopping and a picture of a child around her. A pigeon is just landing or taking off from the picture frame with the child.

Image two is of Liburd on stage in Muvvahood, credit David Monteith-Hodge. She is standing in front of a screen where there is a projected image of Jamie Oliver with angel wings and a halo drawn around him. Liburd is holding up a chip from a chicken shop box to his mouth.