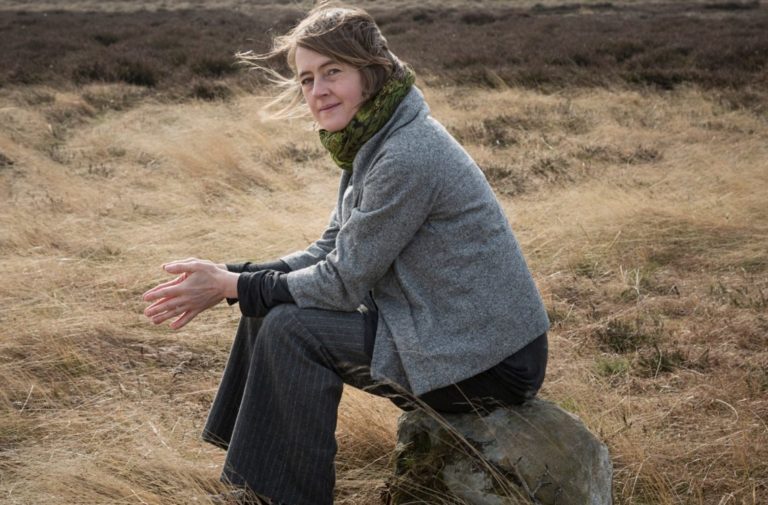 The power of the wind

Karine Polwart is an accomplished songwriter on the Scottish folk scene. With five BBC Radio 2 Folk Awards under her belt, she decided to take on a new challenge and entered the world of theatre. A natural storyteller, her debut play, Wind Resistance, which was first performed at the Edinburgh International Festival in 2016, was met with critical acclaim.

The idea of this project originated from Polwart’s observations of the annual migration of geese to Fala Flow, a tiny peat bog just south of Edinburgh. The way the birds work together to aid one another’s flights, got Polwart thinking about how we also depend on each other. She says: “it’s a meditation on the ways in which we, as humans, protect and care for each other and for all life, by stepping up, falling back, labouring and resting in our own fashion. In particular, it’s a hymn to mothers and birthing, to the proffering of sanctuary, to the miracle of medicine, and a reminder, a warning, about the consequences of isolating and forgetting

A Pocket of Wind Resistance, released on 17 November, is the musical accompaniment to her theatrical debut. It captures the fight and flight of human existence against a backdrop of the struggles and wonders of the nature that surrounds us. The blur between the natural world and human is thoroughly explored throughout the album and resonates with the current political state of the planet. Through storytelling that spans time and place, this is a highly relevant 21st century masterpiece.

The album begins with ‘All on a Summer’s Evening’. Hauntingly beautiful melodies float over mechanical instrumentation which reminds me of a wind-up music box I had as a child. The lyrics speak of heather and barren moors which conjure the dramatic landscape that sets the scene of the album. The minimal production and gorgeous Scottish folk vocal is comfortably interrupted by spoken word stories of childbirth and nature.

‘The Moor Speaks’ is more rhythmic, chaotic and dream-like than the opening track. Again, there is plenty of nature imagery as Polwart speaks of heather, moss and the moors. There is a gentle call and response between spoken word and enchanting harmonies which seamlessly stitches the two vocal elements together. Soothing whispers are heard throughout which imitate the gentle hushing lullabies of a parent desperate for their child to sleep. The lyric, “my little one shall sleep” echoes the care, patience and loyalty of parenthood. Birdsong is heard at the end of the track which leads nicely into ‘Lark in the Clear Air.’

This is more cheerful sounding than the previous two tracks and the pizzicato strings create a warm, tribal rhythm. The lyrics gently tell stories of larks and the love that a mother has for her child. In this song, we are introduced to Roberta and Will Sime, who married in June 1919 in the absence of Roberta’s family. This personal history of Karine’s neighbour, Molly Sime, is the central thread that holds the album together.

The melodic theme from ‘All on a Summer’s Evening’ returns in the next track, ‘Labouring and Resting’, but this time with fuller layers of instrumentation. Looping guitar patterns, whispers and bird song imitate the movement of a flock of geese “stepping up, falling back, labouring and resting”. This is the lead track of the album and captures the migration of the geese that the project was inspired by.

Traditional folk guitar opens ‘Tyrannic Man’s Dominion’ with delicately picked chords. We hear Polwart’s slightly lower register here as she combines her own storytelling with the poetry of Robert Burns. There is an abundance of nature imagery throughout the song and an autumnal feel is crafted. There is a reference back to ‘Larks in the Clear Air Sing’ as this phrase forms part of the lyrics. These strands that run throughout the album cleverly tie the stories of protagonists, Will & Roberta, together. At the end of the track, Polwart tells us that Roberta is now pregnant.

’Place to Rest and Mend’ pays tribute to the medieval Soutra Hospital, which was run by Augustinian monks and used to stand in Fala, not far from Polwart’s home. She describes the primitive medicine used at the hospital in detail and celebrates “the kindness of plants and the kindness of hands” that played a part in forming our NHS. Alongside this, there is a military theme with rolling snare drums marching in the background. In the album’s narrative, we learn that Will is troubled by the sounds of artillery fire and war.

‘A Benediction’ is a lullaby in anticipation of the arrival of Roberta and Will’s child. ”My little one shall sleep” is again repeated in angelic harmonies and layers. Polwart describes how Will throws his energy into building a pine crib. The devastating ‘Small Consolation’ depicts Roberta’s view of five baby birds fallen from their nest – one is still alive but twisted and broken. Roberta weeps for the fragility of life and the creature inside her. She instinctively constructs a birdhouse as a small consolation, a great effort in her heavily pregnant state. Towards the end of the song, Roberta goes into labour and Karine tells us that Will hears her singing replaced by low moans.

‘White Old Woman in the Night’ is a deeply personal account of the struggles of Polwart’s own childbirth experiences and a celebration of how much midwifery has moved on in just a couple of generations. There is a sense of panic in the song and we realise that Roberta’s labour is not straightforward. Breaths are heard through the mix, which signify Roberta and her unborn child’s struggle and desperation for life.

‘Lullaby for a Lost Mother’ is an interlude of despair and an ode to Fala Flow. It’s almost acapella with only bird song and minimal strings plucking in the background. The melody from the first song returns again in ‘Remember The Geese’ as the flock return home. Polwart sings from the point of view of the geese: ”we are each other’s wind resistance, a human skein and we are not going to make it on our own.”

‘Molly Sime’s Welcome to Salters Road’ depicts Roberta’s third day of labour. Tragically, she dies. In mourning, Will burns their bed and the bloody sheets and we are introduced to Molly Sime, the only daughter of Roberta and Will.

‘We Are All Bog Born’ is the outro to the album and reflects the cyclical nature of human existence. “The first place we ever know is warm, wild and wet. We are all bog born. ”

Taken as a whole, this album is both sentimental and political and intertwines the stories of Polwart, the history of her neighbour, Molly Sime, and Scotland’s heritage. It encompasses the fragility of life in all forms and calls for the protection of the NHS. The struggles and joys of parenthood are reflected equally and as a mother of two, Polwart offers us a deep and personal understanding of what it means to have a child.

Image one shows Karine Polwart sitting on a rock in the Scottish countryside of Fala. Image is by Suzanne Heffron and shows Karine looking directly at the camera

Image two is the album art for Wind Resistance. It is a line drawing of Karine Polwart’s head and shoulders with images of trees and birds overlaid across the image