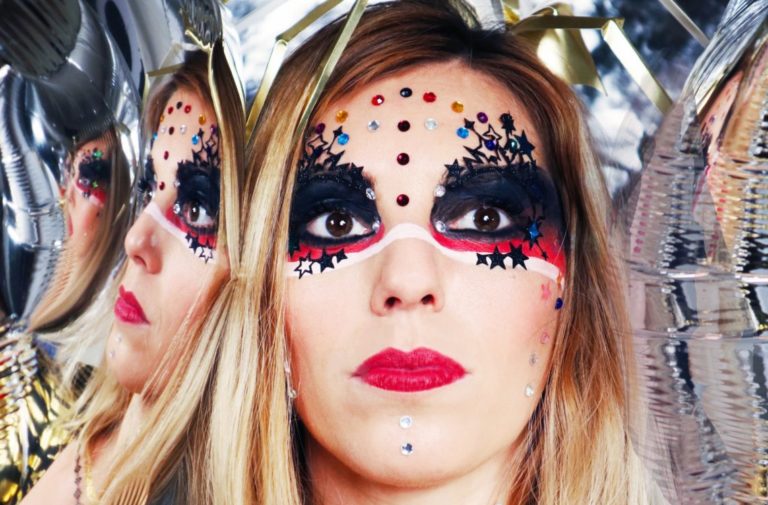 Scottish experimental singer-songwriter Tamara Schlesinger first made her name fronting the acclaimed alternative folk band 6 Day Riot. Since then, she has embarked on a successful career as a solo artist and MALKA is her latest project.

Evoking rich imagery via synth soundscapes, MALKA’s music has been used extensively in film and television. You may have heard her music on Skins, Scream 4, 127 Hours and Lock, Stock and Two Smoking Barrels. Tamara is also a lecturer and owns her own record label.

Ratatatat is the follow-up to her well-received debut album, Marching to Another Beat. While the loveable, dance-ready pop beats and world music influences remain, this album takes much more of a political stance. This is unsurprising, considering all that has happened in the world since her 2015 debut. Politics isn’t exactly unfamiliar territory for MALKA and she refers back to her time with 6 Day Riot to draw on these themes.

“I wasn’t afraid I suppose, lyrically, of going back to my folk roots,” she said on her website. “I would write a lot of social commentary then and I’m quite politically aware…”

Notably, the promotion of the album has been entirely funded by fans through PledgeMusic, allowing fans to get their hands on anything from a lyric booklet to a special home gig package. Crowdfunding is becoming a more popular and fantastic way to engage with an audience whilst retaining creative control of a record. Ratatatat was also released on vinyl which MALKA says she couldn’t have done otherwise.

The opening track ‘Fell For You’ sets the tone for the album, with the video featuring a parodic animation of Donald Trump. The intricate layering of vocals, bright synth palettes and jungle style drum loops create a feeling of otherworldliness and escapism in these troubled, political times.

There’s an overarching joy, vibrancy and liveliness throughout with the lyrics encouraging the listener to take time away from their busy lives and just simply breathe

Next is ‘No No No’, another politically-charged track, and a direct call to the public to take action rather than remaining impassive towards damaging political and social changes of the past couple of years. This particular song was written in defence of the NHS but could be interpreted to apply to any current type of social unrest in the UK.

This is followed by the excellent ‘Wonder Why,’ which has a more urban, carnival vibe and follows themes of lies and disharmony. The upbeat track is full of glorious pop hooks and overlaying melodies and loops.

‘Get Out (of the Jungle)’ is one of the stand-out tracks for me, conjuring images of the Calais jungle and the difficult reality faced by refugees on their journey away from their home country. The outro lyrics “Fill these empty pockets because there’s nothing left to pull me down” depict the unbearable struggle for survival while the sweet melodies lift the mood of the track and sprinkle a little light into the darkness.

‘Freedom’, one of the sparser, more experimental arrangements to feature on the album, offers soothing, euphoric synths that signal a slightly different direction for MALKA.

‘Breakout’ is a return to her trademark, rhythmic pop; full of hooks and intricate layers. There’s an overarching joy, vibrancy and liveliness throughout with the lyrics encouraging the listener to take time away from their busy lives and just simply breathe. The message is certainly relatable and it gives the track the potential for more mainstream appeal, meaning it wouldn’t be totally out of place on a Radio 1 playlist.

The dramatic opening of ‘Gold’ explains why MALKA’s music has been used for so many film and television soundtracks. Bringing to mind royal and decadent imagery of red carpets and affluence, this track is begging for a music video.

The next track, ‘Falling’, creates a shimmering dreamscape that gives the sense that there is a better world out there. The lyrics, once again, encourage perseverance and call us not to turn our backs on important issues. Here, the ‘walls between each name’ are perhaps again a reference in support of the NHS.

‘Don’t Need Anyone’ is a stripped-back track with a darker synth palette than the rest of the album. MALKA explores her voice as an instrument here and the vocal loops and whispers create an eerie, somewhat magical texture.

The album ends with the very adept ‘Circles’, which optimistically talks about change, and through sonic loops and musical layers represents the cyclical nature of history. “What goes around, just comes around again” is the main lyrical hook and this rounds the album off nicely, leaving a sense of optimism for the future.

Although the themes are dark at times and address a rather depressing state of political affairs, it’s difficult not to find some light and colour in MALKA’s childlike vocals and addictive hooks and loops. Ratatatat will certainly be played on repeat in my home. It is no wonder she has received support from the likes of Lauren Laverne and Chris Hawkins at BBC6 Music.

Ratatatat is out now on Tantrum Records. MALKA has also announced a seven date UK tour in support of the album. For full details and tickets, visit her website.

Image of MALKA provided courtesy of Wilful Publicity. Image is a face on shot of Tamara Schlesinger. She is wearing very elaborate eye make-up in black and red, decorated with sequins and stick on jewels, which almost resembles an eye mask. She has a silver balloon positioned both to the left and to the right of her face, and her face is reflected in the two balloons