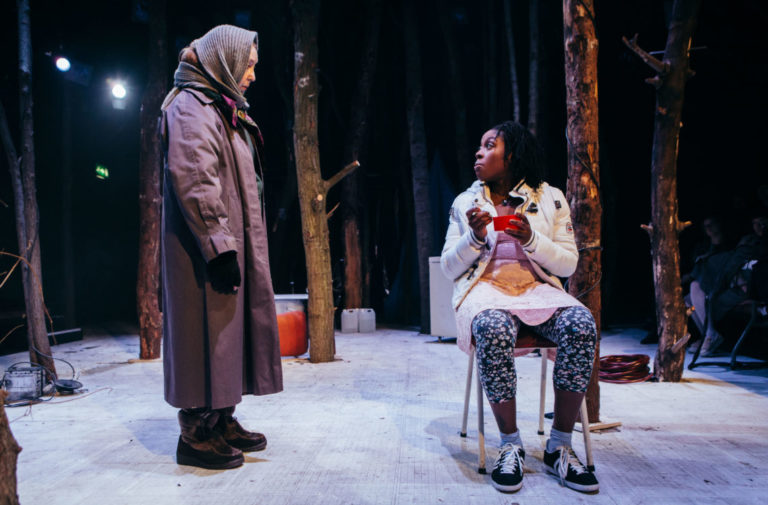 Bad Roads by Ukrainian playwright Natal’ya Vorozhbit and translated by Sasha Dugdale is a disturbing, macabre and deeply unsettling play. By using several interconnected stories it paints a dark and brutal picture of the impact of war on male soldiers, women and society.

The play should also have come with a content note for sexual violence and themes of child sexual exploitation. I watched the play from the front row and it made my experience particularly unsettling.

Bad Roads is set in remote parts of Ukraine where soldiers are deployed to protect the citizens. It is known that one of the potentially horrific characteristics of war is soldiers exploiting the very people they should be protecting. The nature of war brings well-armed groups of men who are often bored, frightened and poorly trained into contact with women and children who are vulnerable and at their mercy. I am reminded of the ongoing outcry about the UN peacekeepers in conflict zones with stories emerging of child sexual exploitation. Some activists have coined the term #predatorypeacekeepers to bring attention to this phenomenon and call for action.

The play is told in a series of short and often tense interrelated scenes. It begins with a woman journalist who is following a soldier. Her monologue perfectly captures how war can be romanticised. Her lonely life is made more exciting by travelling with the soldier who offers her very little. She has hurried sex and acknowledges he is already with someone else. It feels like an unequal relationship and is a precursor to the more brutal power imbalances this play later evokes.

There are three stories which later show soldiers engaging younger girls (they are in their early teens though their exact age isn’t entirely clear) in sexual activity. The girls’ conversations depict an air of desperation and competitiveness; they all fear not being picked by the soldiers even though being ‘picked’ seems fairly horrific. The men in their uniforms and with their deadly weapons represent idealised notions of masculinity and are seen as saving the girls both literally through their role in combat as well as metaphorically from the humdrum routine of their lives. Their foreignness is just as exciting as their status as soldiers.

These scenes remind me in some ways of the descriptions of the predatory gangs in Rotherham where extremely vulnerable young girls were preyed upon. Often they went back because they had been groomed by the men in the gangs and this attention was the only form of ‘affection’ they ever received. As the audience, we can guess the fate that awaits the young girls if they go with the soldiers but we also feel, like them, an overwhelming sense of disempowerment. When the grandparent of one young girl try to intervene, the girl is extremely angry at being left behind whilst her friends have been ‘partnered up’.

This tale of sexual exploitation is perhaps most clearly demonstrated in a scene with a soldier sexually assaulting a young woman. This section is particularly disturbing because part of the scene takes place in the dark with noises of clear distress from the young woman, played by Ria Zmitrowicz. As someone who’s been going to the theatre for over 10 years I don’t remember experiencing anything like this before. It is pretty awful as an audience member to sit there passively and simply listen. Through this theatrical device the soldier’s behaviour is shown as part of the brutality of war. This is juxtaposed with the woman’s desperation, vulnerability and need to please.

The name of one soldier is mentioned throughout: in the beginning he is followed by a woman looking for an adventure and, in the end, his decapitated body is being transported by another woman, played by Ronke Adekoluejo, looking for something she can’t find. It is another brutal and shocking scene. The body, wrapped in a black bin bag, is thrown around and the distressed woman is manhandled by another soldier as she becomes increasingly overwhelmed by her feelings of grief and loss. This scene shows the capacity for humans to wreak emotional havoc and engage in the most brutal acts of violence. War provides the perfect setting to explore this potential.

It was difficult to enjoy Bad Roads; indeed I felt tense and at the edge of my seat throughout the one hour and forty minute show. However, it was a play that absorbed me deeply as it was powerful and extremely well-acted. The use of short but related stories worked well and built tension. The dialogue was engaging and added to a sense of the macabre. It was also deeply thought-provoking and made me realise that the impact of war on society is long-lasting and some people never recover from the experience. It was a play that stayed with me long after it ended.

Bad Roads runs until 23 December. It will be captioned on 20 December.

Images are all courtesy of the Royal Court and are by Helen Murray.

Image one shows two figures on stage. The one on the right is sitting down and eating something out of a small red bowl. She looks up at the figure on the left who is standing and looking back down at her. The figure on the left wears a long coat and a headscarf. They are both in the middle of bare tree trunks.

Image two again shows the same setting of tree trunks but this time a long way back there is a woman with long hair standing in a bathtub. Just visible, probably reflected in a mirror next to her, is the figure of a soldier.