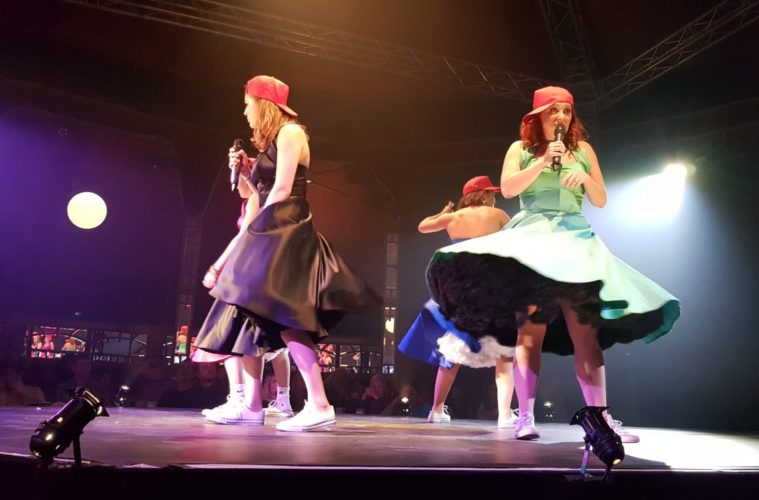 Besides the happy resolution of an unwanted pregnancy scare, never before has the menstrual cycle been enjoyed so thoroughly as it is in Four Femmes on the Thames‘s show, Winter Warmer, in the Spiegeltent in London’s Leicester Square. With the ambience of a 1950s jazz bar, the show takes place over two, fifty-minute acts and consists of the Femmes performing their own songs, ranging from the clever and current ‘Breakfast Brexit’ to the hilariously relatable ‘Treat Me Like You Treat Your Phone’.

The Femmes are modern-day feminists with a weakness for vintage. Their songs smash down awkward barriers and blow away the cobwebs around uncomfortable topics with a bold hilarity that has audience members cheering for more. My favourite example is the ‘Period Song’, in which the Femmes don red baseball caps, mimic a 1990s boy band and use the word “flow” a lot; the puns throughout the show are second to none.

The choreography is grotesquely brilliant, transitions between songs are slick and audience interaction is fun in a way that doesn’t make me start panic sweating and thinking “Please, dear God, don’t come over to me.” It is apparent that the Femmes are seasoned ensemble performers as all four bounce off one another with grace and ease. At the beginning of both acts, they burst on stage with the lighting effects and energy of an X Factor finalist, only better, as no one is crying and Simon Cowell’s snideness is nowhere to be seen. Their energy on stage never falters for a second and the audience feeds off it throughout the show.

Four Femmes on the Thames bolster feminism and gender equality with the harmonies of the Von Trapp family, the sassiness of Jessica Rabbit, the hilarity of French and Saunders and the innovation of the Spice Girls

Femme Filthy (played by Katy Baker) stays true to the vintage theme of the show, embodying 50s glamour as she oozes sultriness and unapologetic sass. Baker has a singing voice that I can only describe as “sex” (move over Barry White) and proves in the transitions between songs that she could hold her own as a standup comedian if she wanted. By the end of the night, I’m fairly certain the whole audience, myself included, either want to be her or sleep with her. Apart from possibly her grandparents who are sat in the front row, although one should never make assumptions.

Femme Free-Spirit (played by Emma Drysdale) is a marvellous combination of sexiness, silliness and the badass feminist attitude of the iconic second world war ‘We Can Do It’ image. Drysdale mixes her provocative, raspy singing voice with a seemingly limitless range of facial expressions when it comes to the over-the-top candour required for the ‘Good Vibrations’ number (it involves miming orgasms).

Femme Fick (played by Grace Rowe) is the group’s ‘Tim Nice But Dim’ (link is unsubtitled), a role which she undertakes endearingly. Rowe’s voice isn’t quite as strong as Baker’s or Drysdale’s but instead of this being a weakness it adds to her character. Plus, when it comes to a glass-shattering high note competition (the link is unsubtitled but the lyrics can be found here), Rowe smashes it.

Of course, not all the credit can be given to the ladies in the limelight. Band The Hommes displayed a masterclass of jazz and swing with the relaxed air of established professionals that made the Femmes shine even brighter, metaphorically speaking. Literally speaking, the lighting actually did make the Femmes shine brighter. The lighting design for the show is aesthetically pleasing while staying cool enough to take note of without being distracting. One or two minor technical blips occur with a lighting cue and a momentary microphone issue but both are rectified and smoothed over by the quick-thinking Femmes before the audience were significantly affected.

My only criticism is the length of the show. By the end of two hours, I was musical comedy’d out and in need of some quiet time rather than being left wanting more. I think they could afford to lose half an hour, although trying to choose songs to cut would be as difficult as trying to pick which of your kids doesn’t get a Christmas present this year, assuming all of your children are as hilarious and awesome as the Femmes’ songs.

To quote a lady I overheard in the loo during the interval: “It’s a really clever and really funny show isn’t it?” Yes, yes it is.

Four Femmes on the Thames bolster feminism and gender equality with the harmonies of the Von Trapp family, the sassiness of Jessica Rabbit, the hilarity of French and Saunders and the innovation of the Spice Girls. All wrapped up in classy, sexy 50s polka-dot dresses.

Four Femmes on the Thames will be performing at the Hen and Chickens pub in London on 19 and 20 December.

The feature image is courtesy of the Four Femmes on the Thames and was taken at the gig. The four performers wear brightly coloured 50s dresses with full skirts, plimsolls and the red baseball caps described in the review. Their skirts are swinging outwards as they move.

Rhian Evans once walked into a full-length mirror; she's now doing a Masters at Kingston University