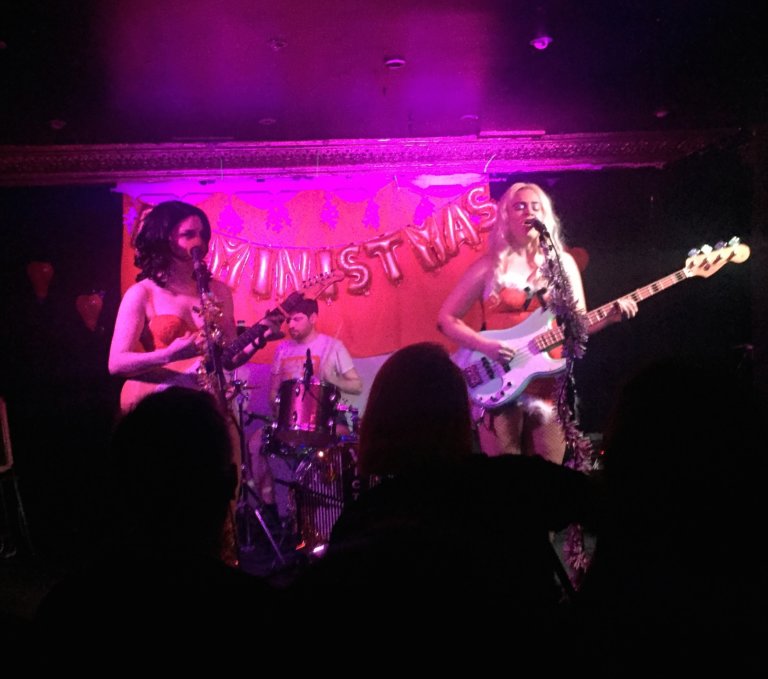 And a very merry Feministmas was had

At a time when many of us are forced together with people who make life more difficult, the excuse to spend time with the family we choose is too precious to miss. As such, it is a full house that gathers at The Victoria in Dalston four days before Christmas to celebrate Dream Nails’ ‘Feministmas’.

It’s a mutual appreciation society of artists who admire and support each other, so by the time Wizard Apprentice begins her bewitching set, members of Dream Nails, Big Joanie and Charmpit are front and centre. Part of the Practical Records platform for queer and experimental musicians in California, Wizard Apprentice interacts with the audience via a projection of herself as ‘host’, communicating with a speech synthesiser that sounds like her own voice via Stephen Hawking. This barrier between artist and audience makes meaning from the words not the delivery, and relieves some of Tieraney Carter’s anxiety at being onstage, letting the lyrics spin their own silk.

As with her album (released on cassette as well as digitally), Carter lets the electronic loops and soft beats of a newer track start gently first, like the stroke of a brush, growing into ‘I Am Invisible’. The simple beats carry the solo vocals, as the story is laid out by Carter’s clear, calm voice. It’s the voice of a “highly sensitive introvert” as she explains in the song ‘Everywhere I Go’, with the confidence of a thousand bedroom performances behind her. This bears out – the producer and the performance artist live-streams bedroom gigs every second and fourth Sunday of the month in the Almost Live series.

Is there such a thing as a Charmpit gig where it feels like you haven’t been invited for a secret sleepover at a big girl’s house?

Does being a California native mean Wizard Apprentice is more sensitive to the struggle for empathy in an age of information overload? Certainly ‘Wet’ carries the emotional burden of trying to bring meaning to an increasingly removed life. Heritage and homage come together in ‘Revenance’, where Carter summons the physical memory of an ancestor, grandmother or matriarch through her own body and skin. It’s a more resonant and precise telling of the ‘know where you come from’ theme than you’ll hear all decade, both startlingly simple and instantly heartbreaking.

The search for meaning continues with ‘Research Stage of Love’, a clear eyed intellectual exploration of sexuality and pleasure hiding a love song under its skirts. Björk would be jealous. There’s a complexity to ‘I Leave A Trail Of Honey Everywhere I Go’ which closes the set.  In the song Carter welcomes “the potential of being mediocre” but makes the crowd effortlessly move to her precise pulse.

Is there such a thing as a Charmpit gig where it feels like you haven’t been invited for a secret sleepover at a big girl’s house? Not tonight anyway, when the Christmas spirit waltzes on stage with some big shiny knickers and launches into ‘Summer Up My Skirt’ for a bit of season-swinging. With the kind of energy that could power a roller derby team we launch straight into ‘Do It For You’ and ‘Free The Burbs’. For a band that sound like they could be your best bad babysitter, this paean to the awful beauty of satellite towns is a pure punk rock shout out to selfhood.

Bassist Anne Marie announces after the third song “it’s too hot to play in a wig” and the blonde mane comes off.  Charmpit tear through ‘Baby’ straight into ‘Bad Attitude’, articulating all the crap you’ve ever had from your McJob boss, as a woman who couldn’t keep her mouth shut.

Anne Marie and Rhianydd’s sweet harmonies are so damn charming on ‘Vacation’ it must be why BBC 6 Music’s Gideon Coe fell in love with it, and the storytelling too – how many times have you fallen out with vacation mates at 5am in an inhospitable airport just because you’re hungover and it’s cold and you never meant to get cross at them?

It’s at this point that the pair reveal themselves as Kacey Musgraves fangirls for their cover of ‘True’.  As a small-town-don’t-care country musician, Musgraves gently breaks the mould and isn’t ashamed of her roots.  Charmpit second that emotion and reconfirm to everyone in the room that it’s ok to be unusual and you don’t have to be embarrassed, ever.

Then, the inevitable happens, it’s time for the Mean Girls homage.  Drummer Alex gets to stand up. There is a pitch-perfect tape machine, a little pre-scene dialogue and the band step up to cosplay the shit out of ‘Jingle Bell Rock’, complete with a cappella singalong. Nobody cares about looking cool.  It’s a Christmas miracle.  As is ‘Buckfast My Heart’, taken from the band’s EP Jelly (which you can buy on vinyl)

Like a drunk sleepover with a healthy dose of sex and snogging, this Charmpit gig is the best of girl culture that doesn’t centre the object of desire as a boy, or even at all.  Don’t go thinking it’s all sex and sparkle though, as Anne Marie reminds us; “At the heart of feminism is anti capitalism and the fight for oppressed people. Working class feminism rules”.

The band have forgotten they’re ‘fucked up on Beechams’ and we’re bouncing along to the Dead Kennedys’ esque buzz guitar and shouting “nobody cares if your dick is on fire!”

In the creation story of Dream Nails, Kathleen Hanna is a benevolent goddess who sent down the commandments to keep the feminist community safe through years of famine and pestilence. Nowhere is that more evident than when the philosophy which underpins the band is spewed out, girls to the front, men to the back. It doesn’t work.  Two men refuse to be moved from their position front left.  The audience of friends and strangers rally and ringleader Janey asks again. The men heckle. But it isn’t their space.

We didn’t need a trite demonstration of why Dream Nails exist for this review, but we got one.  The band explain why they lay these rules down on their Facebook page. Eventually, after a five minute stand-off where the band patiently wait and crowd members urge them to move, after Janey asks the brothers at the back to join the call, the men move.  Grumbling through the crowd, they still don’t get it.  They’re just here for the music?  Well Janey doesn’t “write fucking music for people like you”. A cheer – we forget them. This philosophy carries the band so deep into the audience’s heart that any rough edges are smoothed off like Vaseline on a camera lens. Live, Dream Nails are much tighter and more focused than they were just a year ago, and the bass runs into dance grooves which move like ESG in places.  In contrast, the first of their singles tonight, ‘DIY’, is a toolkit for jump-starting teenage engines which takes two seconds to join in but also reminds us that the power is in our hands, even when it doesn’t feel like it.  ‘Corporate Realness’ picks up where Charmpit left off, listing the mundanity of office life “FYI, KPI, swivel chair, swivel eyes, touching base, flagging up, paper towel, plastic cup, action point, kitchenette, one to one, cigarette, TOC, COP, kind, regards.”

It’s still Feministmas in The Victoria tonight for the Dream Nails’ version of The Waitresses’ 1982 single ‘Christmas Wrapping’ and a dream that maybe we could all just “miss this one this year”. The joyous bare bones of the 4/4 ‘Tourist’ lets Janey give her inner Poly Styrene free rein in one of the night’s energetic peaks.  That the track calls out people who try to take control of our bodies just makes it more of an anthem for the crowd. By the time ‘Deep Heat’ closes the set, the band have forgotten they’re ‘fucked up on Beechams’ and we’re bouncing along to the Dead Kennedys’ esque buzz guitar and shouting “nobody cares if your dick is on fire!”. It’s a good way to die.

Self-identified black sistah punks Big Joanie come from London’s activist DIY scene, and wear their respect for women like Olive Price and Angela Davies lightly but sewn on with double stitching.  The bass rumble and sparse guitar scales of ‘It’s You’ carry the atonal vocals of a slacker Ronettes, reminding the ex that it really is them, not you.

Singer Steph’s lyrics sound like you’re hearing truth for the very first time, like this is what it sounds like when someone is being honest with you.  ‘Eyes’ runs on a syncopated snare to turn the track up to Slits-worthy levels of experimentation.  It’s a shock to discover that this is the final song – but there’s a secret gift from them to us.  Apart from the killer merchandise (beautiful hand illustrated t-shirts, colour-pop 7inches) that Big Joanie could send us into the night with, they’ve got an R’n’B winner up their sleeve.  A bare bones, drum-led cover of TLC’s ‘No Scrubs’ is full of banging intent and lines in the sand.  “No! I don’t want your number. NO! I don’t want to give you mine”.

It’s a brilliant full stop on the breathless night and the packed crowd exhale a little and mill about, too fired up to go home, waiting for a disco that never arrives.  Strangers start conversations, band members bond and everyone glows with a sense of belonging.  These four bands might just be your ticket to that same feeling, some time in 2018 when Christmas is a distant memory.  It would be a good place to start.

Image one: Charmpit performing on stage at Feministmas. Photo by Becky Grisedale-Sherry, used with permission.

Image to: Photo of a banner reading ‘Feministmas’ hung as stage backdrop. Photo by Becky Grisedale-Sherry, used with permission.