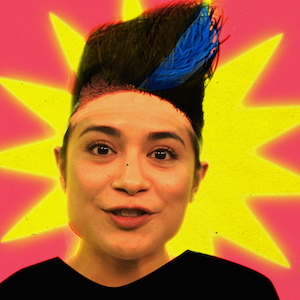 Visit Pussy Willow, a town (not) like any other Pussy Willow, the creation of writer and animator Kate Jessop, is a fictional animated town: wonky and familiar, cosy and English, inhabited by optimistic people going about their business with impossible hair and outlandish outfits. The inspired animation technique – a combination of cartoon and live action – delightfully balances the situations in Tales from Pussy Willow halfway between another world and ours where we can enjoy Kate’s wry observations.
The town’s residents encounter constant, most often gendered, obstacles in their lives. In one episode, we witness the dismissal of a brilliant woman astronaut’s achievements in favour of questions about her clothes in ‘The Astronaut’, the accomplished female solicitor’s intern mansplaining her job to her in ‘The Mansplainer’ and a laugh-out-loud convoluted lovers’ row in ‘Lesbian Argument’.

Everything about this series, from the amusing subject matter to the brevity of wit, over-the-top backdrops and superb acting, combine to deliver a velvety intellectual punch like the cleverest chocolate in the fanciest box: good looking, sweet, smooth, subtle and forever remembered. Even the music fits – jarring yet strangely compelling.

Misogyny is rarely fun but in the hands of an insider and fellow victim, this is comedy at its best. Pussy Willow, which includes a train station, solicitor’s office and a pub, ably represents the world we all know, where ‘good men’ amble about comfortably saying whatever is on their mind and women are condemned to listen or second guess their intentions when their real urge is to leave the room and slam the door. The Pussy Willow womenfolk have to embrace the ridiculous situations recognisable to us all. What keeps us watching is the superb dialogue, sharp script and more than a few belly laughs. To a large extent, Tales from Pussy Willow owes its status of “a cult web series” to Kate Jessop’s original technique of mixing real actors’ heads, shot against green screen, with digital animation. The characters are brought to life by skilful deadpan acting – what could seem a dull conversation about flat sharing becomes a comic adventure, where everything is accepted as normal when clearly nothing is. Following in the footsteps of original characters like Flat Stanley (where everyone behaves as if a boy thin as paper is perfectly ordinary), Tales often suspends reality, for example in ‘Smile’ that examines the stereotyping of catcalling men or in ‘Coming Into The Station’ that questions assumptions about the sexuality of middle-aged women and appropriate use of technology.

While Pussy Willow has feminist and queer themes at its forefront, the men in its pubs are nice enough as they spin their tales. Who hasn’t heard about the wannabe rock star or the impending autobiography of a young man fascinated with his own talents? Who among us has managed to avoid being on the wrong side of a well-meaning vegan, feminist, parent, colleague or doctor? We know these characters and their trials well.

Conflict is inevitable as the protagonists try and fail to employ well-mannered strategies to counter blunt and unempathetic nonsense arising quickly and without warning. The community exists in a continuum of ludicrous situations where escape is impossible and protest is futile. Keenly observed in every way, some of the sketches shine an intelligent spotlight on the emotional risk of coming out and questioning of identity (especially the episodes ‘Staffroom’ and ‘That’s Fine By Me’). For me, as a queer filmmaker myself and curator at QueerBee Film Festival, it is the exquisite construction of the varied characters that I appreciate most. If you are in ‘the business’ and the consumption of film and image is part of your daily routine, it is not often that you get lost in the moment or surprised by a joke, and I have been consistently entertained by Pussy Willow. “What colour is your soul?” and “That’s fine by me!” are catchphrases as powerful as anything uttered by Catherine Tate’s Nan or one of Harry Enfield’s chums, and as razor sharp as lines from Smack the Pony by creative genius Vicky Pile.

Tales from Pussy Willow confirms that humour is the best antidote to the societal ills the series targets, from misogyny and racism to irrational parental fears. Chuckling over my favourite of all episodes, ‘Parent’s Chat’, I wholeheartedly agree with Oscar Wilde who said: “It is absurd to divide people into good and bad. People are either charming or tedious.”

You can find two series of Tales from Pussy Willow on YouTube.

Images description:
1. Four cartoon ‘people’ with real people’s faces are sitting next to each other as if in a waiting room. There are two men, one reading a newspaper and the other looking at his tablet, and two women, one younger and the other older, wearing glasses. It’s a still from ‘Coming into the Station’ episode of TPW.

2. A black&white portrait of a white woman with white shoulder length hair and a hat. It’s the director Kate Jessop.

3. A cartoon figure with real woman’s face with glasses and wearing a white coat, next to ‘Pussy Willow Medical Practice NHS’ sign. It’s a still from ‘That’s Fine By Me’ episode of TPW.