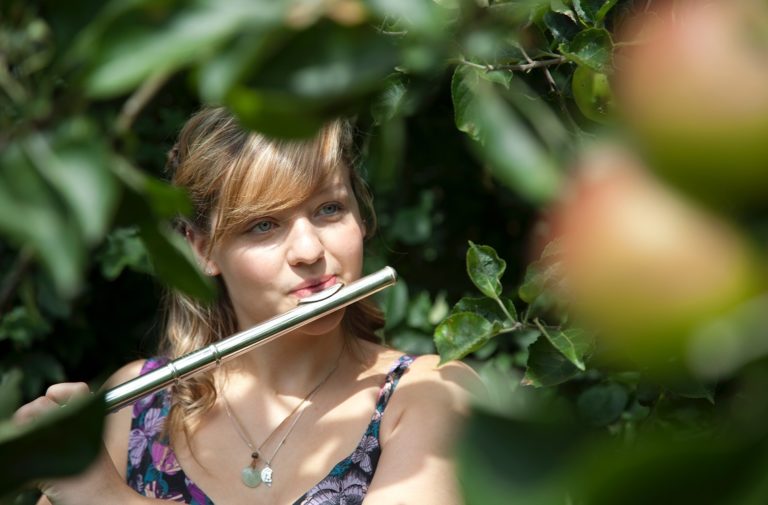 “I want to be ant in the corner of the room, not the elephant at its centre”

In Italy I see a woman as a flute player trying to play some good music from a book kept on her knees. Her posture is clumsy and unhelpful. She will not produce the best sounds with her flute. In this metaphor, feminism is the music stand that will allow her to play beautiful music by ennobling her gaze and her posture. Unfortunately, many women in Italy don’t realise that they could play better music than they do and they don’t want the music stand. They think the music stand will make them unpopular and they will look ridiculous with their new posture.

This is a strained metaphor I’ll admit and of course I know that I’m generalising about Italy and that every country has a problem with sexism. However it is true that there is a lot of objectification of women in Italy and that Italian women ourselves internalise this. If you are a beautiful woman you will more easily gain visibility or good economic outcomes. This means that it can be hard to separate not only the weapon from the bullet, but also to understand who might be hurt and who is pulling the trigger – another strained metaphor, I’m sorry!

Standup is a very new form of entertainment in Italy. Many people don’t know what standup comedy even is and among comedians ourselves there are endless debates about the differences between standup and cabaret. There are no comedy clubs and it’s not yet part of the Italian culture to go out for a few pints and an open mic night.

This means that as well as developing our own material, Italian standups are also having to raise awareness about this new form of expression, to find venues and audiences that will appreciate it. To perform in Italy you also need to be a promoter, an agent, an organiser, a marketer and PR rep, most of the time without any financial reward. It’s hard work and takes up a lot of time. And you really need to believe in what you are doing, as at least once during your career you will perform in a restaurant while the audience ignores you in favour of their food. We don’t have hecklers who tell you you’re not funny, they ask you for more risotto!

Of course with a limited number of standups, only a few women are currently gigging in Italy. I hope though with time that more female comedians will challenge the dominant male comedy scene, but for now as a woman comedian, you are unusual.

I have wanted to do comedy or cabaret since I was 16. On a course I developed a character who was a stereotypical ‘dumb blonde’. I knew almost nothing about the world of comedy, my knowledge extended as far as the tourist entertainers that performed in my area during the summer, but that was enough for me to decide to make it my career. However I soon discovered the limitations of my character; I was stuck being ‘sexy’ while my male colleagues were able to do all sorts of extreme and surreal things. I felt comedy was limiting me instead of helping me to express myself. I had to make a decision: did I want to be beautiful or funny? So at that moment I chose to be beautiful and began a career as a model.

Even now, having taken up comedy again, some people tell me that because of my appearance I won’t make people laugh, but I try to ignore this bit of objectification and think of myself like a Russian Doll. You don’t really appreciate a Russian Doll until you realise it is a broken doll: you open it and you find another littler one, and then another one again. The smallest doll is the childish funniest bit of me. Even though it’s my responsibility to be funnier and funnier, the people on the outside need to look a bit harder too.

Being a comedian in Italy, I would have had to speak about feminism. Humour should reflect its society. However, I think that at my best in Italy I would end up being labelled a ‘funny feminist’ and nothing else. I may be a proud feminist but I don’t want that to be the only thing I am known for. I want to develop a female perspective in my comedy when I feel like it, but I don’t want to be always reminded I am a woman first and a comedian second. In Italy with its sexism and new comedy scene, I would have always been pigeonholed as the feminist comedian and I don’t want this.

I think that creativity, or my creativity at least, cannot be driven by labels. In order for me to be funny, I need to forget that I am a woman and communicate with my soul and then with honesty to everyone. I am not saying that I need to deny that I’m a woman in order to be funny, just that I need to forget it in order for my creativity to flow. And if you live in a sexist country you will always have this wall in front of you called gender. And for me, that wall is limiting.

The challenge of being a rare female standup in Italy just doesn’t appeal to me. I hope there will be more women doing comedy in Italy soon, but I didn’t want to wait. I decided to leave and to focus on a different challenge: doing comedy in the UK in English.

For seven years I was involved with the Italian Deaf community and I studied Deaf humour and sign language. Through doing this I discovered how a minority perspective can be very intriguing and funny. The more I studied minority humour the more I felt I wanted to be an ‘outsider’ comedian: one who shares stories from the perspective of the corner of the room and not the centre. This approach gives you a complete freedom and allows you to challenge and criticise mainstream behaviours.

I want to share my story at alternative comedy nights with people who want to listen to something unusual. I want to be the ant in the corner of the room, not the elephant at its centre

I am not writing material in English in order to broaden my market or appeal to wider audiences. Instead, I want to focus on my specific immigrant experience, and I want to do this deeply. I want to share my story at alternative comedy nights with people who want to listen to something unusual. I want to be the ant in the corner of the room, not the elephant at its centre.

I arrived in the UK five days after the Brexit vote and since then I have been gigging all around the north: Manchester, Leeds, Sheffield, Liverpool, Newcastle and Southport. It’s a new experience for me, for the audience and for the comedy promoters. Maybe this experience won’t work and my career won’t go anywhere, but this challenge matches up with my personality and experience and I’m enjoying it.

Standup asks its audience to share the same language, meanings and nuances as the performers. Right now that is something that I have in the UK that I don’t feel I could have had in Italy. Once other female standups in Italy start including feminism in their work, then perhaps I will go back. Then other women will also be playing their own flutes with their own music stands and creating their own music, rather than waiting for the baton’s directions from the same boring conductor.

The feature image is a photograph by Mark Fletcher-Brown on Unsplash showing a woman playing the flute surrounded by bushes.

Image two is a photograph showing the head and shoulders of Carla Pol. She looks above the camera and is wearing a fur hat. Her right hand is propping her chin up and her left hand holds a ukulele up by her head. She has a tattoo on her right shoulder.