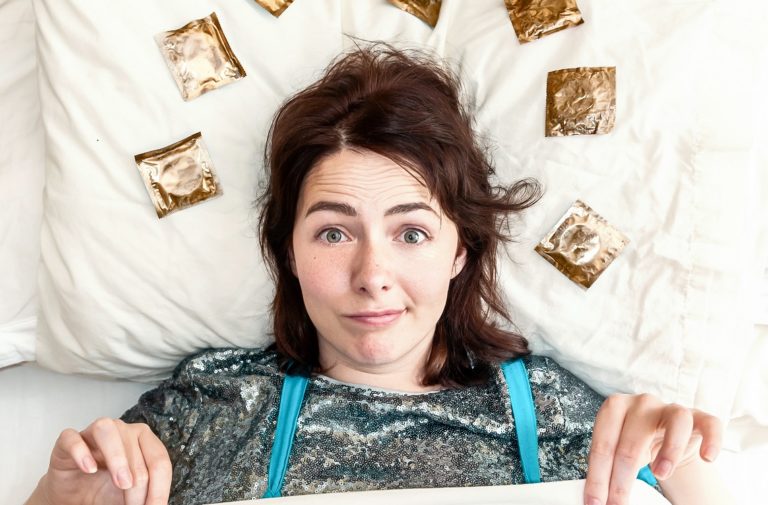 There’s nothing ‘broken’ about not being interested in sex

Fran Bushe is an award-nominated comedian and a prizewinning playwright. You can follow her on Twitter @franbushe

“Have you ever thought about just not having sex?”

These words were said to me by a doctor a few weeks before I turned 30. I’d been sexually active for 14 years and the truth is that I just didn’t ‘get’ sex. I had sex and I wanted to want sex, but for the most part, I participated (giving appropriate “ooh” and “aah” noises at what felt like reasonable intervals) and hoped that the next time would be better. Often, it hurt.

Before this doctor’s appointment, I’d decided that enough was enough. I was tired of feeling underwhelmed and wanted to become a multi-orgasmic-tantric-come-with-ease-never-painful-sexual-goddess. Or, at least, learn to enjoy — a bit — the sex I was having. I sought medical help, tried supplements and alternative therapies. I ended up writing Ad Libido, a show about my experience.

I’d been honest with partners about my lack of enjoyment but once they knew about it, sex became a mission to ‘fix me’.

Partners would kindly say “What about that time?”, “Did that special move work?”, or “This always worked on my ex”. Communication is essential during sex, but it ended up feeling like sex was taking place under exam conditions; your hour to make Fran have a good time starts now.

Often, as a partner fell asleep next to me, I would tell myself that I was difficult, broken or not wired up right. Mostly, it was enough for me that my partner was having a good time. But with long-term and casual lovers alike I’d inevitably feel like I was missing out. I once slept with a man who practiced non-ejaculatory sex and came seven times during one session; I challenge anyone in my place not to feel left out.

It is estimated that around a third of young and middle-aged women suffer from a form of sexual dysfunction, along with around half of older women. This can include problems with desire, orgasm and pain during sex. I have experienced all three at some point.

While for some women, being diagnosed with female sexual dysfunction can help them seek treatment, there are also the dangers that come with medically labelling someone a ‘dysfunction’. Personally, I found it difficult to feel both sexy and dysfunctional.

It is also worth noting that the symptoms of female sexual dysfunction are not necessarily problems unless the woman feels they are affecting her happiness. Women all have different sex drives, levels of sexual response and sexual preferences, so there is a danger of medicalising something that is just one woman’s norm.

Sitting in the doctor’s surgery with my medical history up on the screen, I could see my sex life mapped out; appointments spanning 14 years marked the times I’d felt brave, desperate or supported enough to ask for help. After each appointment, I’d left feeling unheard, unimportant and untreated.

Between those times were years of thinking that not enjoying sex wasn’t life-threatening and so I shouldn’t waste a doctor’s time. I mean, someone could be dying in the waiting room whilst I was complaining about not having a good time between the sheets! Not enjoying sex felt like a ‘luxury’ problem.

This severely affected my happiness. Sex can be a natural way to cure pain, relieve stress, sleep well, or even to boost creativity. More than that, in my experience, not enjoying sex can make you feel passive and adds undue pressure to relationships.

It can be lonely: I felt overlooked by the doctor, partners often took it very personally and friends’ well-meaning advice of “When you meet the right guy it will be different!” just isn’t true — I’ve met lots of lovely ‘right guys’.

So, when the doctor said, “Have you ever thought about just not having sex?”, I felt very alone. For some people, not having sex is the life choice that works for them. I tried abstinence, but it wasn’t for me. For many with sexual difficulties — and their partners — there is not enough support out there. Plus, there’s what feels like an enormous taboo in even discussing it.

After watching my show, many women and men in the audience have told me their stories of sexual pain, loss of libido, the disparity in sex drives between them and their partner, worries about size and the sense of failure these experiences often bring.

But many people actively want to talk about it. Talking about it is scary for me as it means admitting I often feel intimately broken. Making a comedy theatre show about what it means to have a healthy, happy sex life tackles some of those taboos and gives me back the voice I so often lose in bed.

Featured image courtesy of the author. Image is of Fran Bushe, the article’s author, lying on a bed and staring straight up at the camera, with a quizzical expression on her face. Packets of condoms lie on the pillow around her head