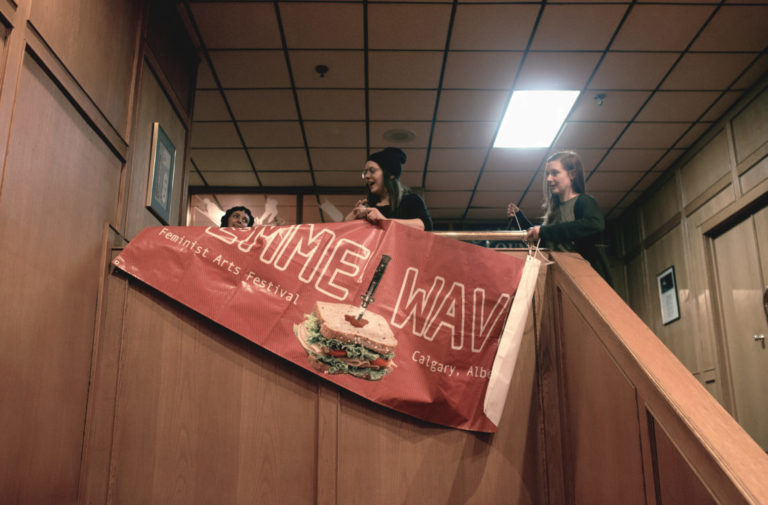 It’s a long stretch from one festival-crammed summer to another. Long after the wellies and raincoats are put away, how can you go about reliving that communal meeting of minds and music? What about one with a feminist focus?

If you’re looking for such an event to participate in, to attend or to inspire a similar event on your home turf, Canada’s Femme Wave has a lot to offer. As many good things often are, Femme Wave, a multi-disciplinary feminist arts festival, was born out of necessity.

When musicians Hayley Muir and Kaely Cormack formed Canadian punk rock band, The Shiverettes, it quickly became clear that their peers weren’t interested in making room for them. “It became almost immediately apparent how sexist the scene was and we were made to feel like outsiders,” recalls Cormack.

Along with noting a distinct lack of female representation in other bands around them, they were also on the receiving end of many comments about their looks rather than their musical ability. “A lot of sound techs were surprised that we knew how to use our instruments properly or people would presume we were groupies rather than performers,” says Cormack.

“Being a female musician is not a novel concept but our experience showed that it’s still not considered to be a common occurrence.”

Cormack and Muir soon took matters into their own hands. “We wanted to create more space for women to perform,” Cormack says. “Women like us.” The duo then began to organise what was originally meant to be a one-off punk music show featuring female artists and bands. However, word of the plan soon spread and their idea snowballed into something much bigger.

“We had women saying, ‘I know women have the same experience in comedy, how about we include female comedians?’” Cormack explains. Stories of similar experiences, requests to contribute, and declarations of support soon came from women who practiced other art forms.

“People caught wind of the show and there was just this overwhelming positive willingness to not only participate but to pitch in and help organise what became the first Femme Wave festival,” Cormack recalls. This ultimately turned a one-night-only event into a four-day festival of visual arts, comedy, film, music and workshops. No small feat.

Now in its fourth year, Femme Wave is western Canada’s only multi-disciplinary arts festival that focuses on featuring women and non-binary participants. With three successful festivals under their belts, Femme Wave organisers have encountered much in the way of positive feedback and are proud of their achievements, including the fact that in 2017, 90% of the music performances at the festival were female-fronted. Femme Wave’s dedication to supporting women in music saw the organisation Canadian Women Working in Music award Femme Wave an ‘A’ grade for their feminist efforts in their 2017 Festival Report Card.

While the drive to realise an annual, exclusively female and non-binary focused arts festival may have garnered swift and wide-spread support, I couldn’t help but wonder what sort of challenges the duo faced.

Cormack, true to her punk rock roots, doesn’t pull punches: “What we’re doing is political and if people want to work with us they have to be aligned with feminist values. That has been tricky at times and resulted in some difficult conversations.” However, staying true to their guiding beliefs seems to have ensured the festival’s success. “So far, in sticking to our values, in terms of artists and venues we want to work with, we haven’t had to compromise to achieve what we want to,” says Cormack. Men that honour the festival’s safer spaces policy are welcome to attend all performances and events and the organisers feel this has an educational component. “It’s good for men to experience a different space or to surrender some of their space to women artists,” says Cormack.

One of the core guiding values that Cormack and Muir are committed to is inclusivity, particularly in making Femme Wave a safe, accessible space. Having experienced plenty of ‘not safe’ environments at gigs and festivals, I very much appreciate Femme Wave’s priorities. “It was important to us from the very first festival that this newly-created space be a safe space for women and all participants and attendees,” Cormack explains. While planning the first Femme Wave, Cormack and Muir attended a festival in nearby Edmonton, Alberta that made a safer space policy central to their event. “We thought this was a great idea and wanted to apply it at every possible level at Femme Wave. We still use a version of that policy now and we’ve had great feedback from participants communicating how important it is to them that they do feel safe to contribute,” Cormack explains.

Cormack has also observed that the festival’s focus on inclusivity and accessibility creates a different sense of space, broadening and enriching the arts experience. “What’s really exciting is that I don’t know exactly who our audience is or which contributors might apply. Overall, at the festival events, there are many people I don’t normally see at the shows and venues I go to. I think that speaks to the need for this festival and this space. Perhaps people need this safer space to feel comfortable, perhaps they feel more oppressed than I do.”

Festival presenters are also selected with values of diversity and inclusion in mind, along with Femme Wave’s programme and range of workshops. At the 2017 festival, educational sessions focused on anything from ‘Car Maintenance’ to ‘Bystander Intervention Training,’ provided by a local sexual health organisation.

The punk grassroots of the foundation continues to this day; we stick to our values and still organise the festival for the right reasons

As Cormack and Muir travel throughout Canada with The Shiverettes and word of Femme Wave continues to spread, they have found like-minded allies across the country. When artists have reached out for assistance in creating similar festivals in their own towns, Femme Wave organisers have happily shared strategies and encouragement. “What we’re doing comes from a place of privilege, we know we’re privileged to be able to put this festival on,” says Cormack.

Of course, arts festivals require much in the way of support, and sustaining both financial and volunteer resources has proven to be challenging for Femme Wave. Having successfully acquired non-profit status, Femme Wave organisers are developing a five-year strategic plan that works to not only legitimise their efforts but also to provide a more formal framework for what are now long-term goals. “We’d like to become an organisation that can offer programming year-round that supports women in the arts,” explains Cormack. “We’d also like to offer workshops and training year-round to help women acquire a broad range of artistic skills, support women in creating art and also facilitate the showcasing of their work.”

This drive to facilitate and promote female and gender-diverse creativity also has a more literally concrete vision: there has been talk of Femme Wave acquiring their own venue. Given the success of Femme Wave’s board, committee and volunteer efforts thus far, it doesn’t seem unfeasible.

Cormack believes it’s the festival’s origins and enduring core ideologies that sets it apart: “The punk grassroots of the foundation continues to this day, we stick to our values and still organise the festival for the right reasons.” Those reasons mean that while the festival has managed to break even while paying artists, it is organised completely by volunteers; from board members, to committee members to festival curators. “It’s important to remember that we are doing this for the people who need space and not for the profit or for the glory of hosting this big festival,” Cormack explains. In fact, Femme Wave has benefitted from being held outside of what would be considered festival season. By running in November, Femme Wave doesn’t have to struggle for space with other summertime Calgary-based festivals nor compete with festivals that might attract artists elsewhere. And, as an added bonus in an unpredictable climate like Calgary’s, the majority of the festival events are held downtown and indoors.

Based on her experience and observations in creating and running Femme Wave, Cormack believes the demand for this type of feminist arts festival is widespread, “I think the issue of women needing space, especially in the arts, is everywhere, not just in Canada.”

What would be Cormack’s advice to anyone considering setting up their own similar feminist music event or arts festival? Well, that’s got a punk rock edge to it, too: “Just do it. It can be overwhelming and scary but you’re capable.”

Image one shows the founders and a Femme Wave Board Member setting up a Femme Wave Banner, Kaley Cormack on left, Hayley Muir centre, and Committee Member/Volunteer Stephanie Perrin right.

Image two shows the Femme Wave Safe Spaces Banner. The text reads: ‘No sexism, no racism, no homophobia, no transphobia, no ageism, no ableism, no hateful language of any kind. Have fun!’ There is further text underneath but it’s hard to read from the picture

Image three shows a crowd at a Femme Wave festival gig. This image is in black and white

All images by Jarrett Edmund