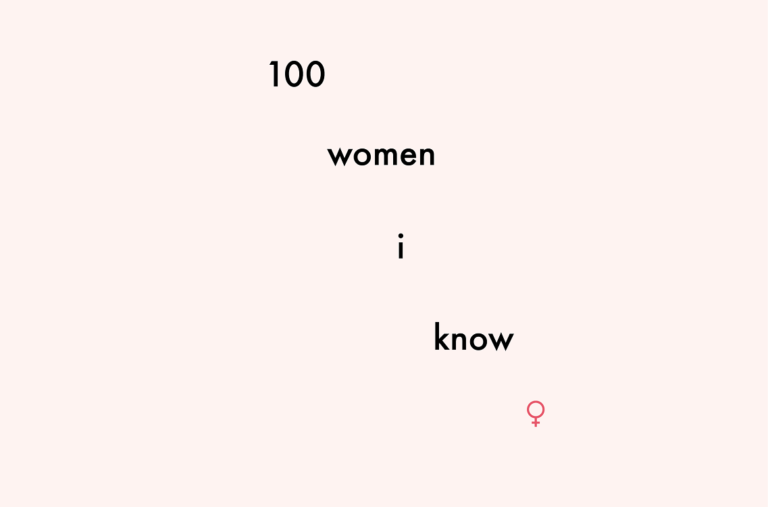 From pain to empowerment 100 Women I Know, a book released on International Women’s Day 2018, has come at a time when women have collectively started to speak out about their experiences of sexual violence. Starting with the Harvey Weinstein investigation, women across the world and across industries have been given the platform to share their stories. A movement has been set in motion and alongside the Me Too and Time’s Up campaigns, books like 100 Women I Know are an important part of it. In a culture that silences and discredits women that come forward, it is a profound act of power and bravery for women to voice their pain.

The founder of the 100 Women I Know project, Phoebe Montague, began with sending a questionnaire to 100 women about their experiences of rape and sexual assault. She found that 92 of them had been pressured or forced into sex. This inspired the next step of the project; the creation of a documentary film comprised of interviews with four rape survivors and an accompanying book collecting personal accounts of rape and sexual assault. The aim of this project is to open and redefine the conversation on rape, to centre the voices of women, empower them to speak out – and to believe the women that do.

The book is made up of a series of short quotes and longer personal accounts, ordered in a way that links each account to the next. The book moves through accounts from women as young girls through to teenage experiences and then adulthood, yet the commonalities between the women’s stories are emphasised. There is a recurrent theme of the contributors not initially realising that what happened was rape and feeling shame, guilt or at fault over it. The perpetrators are family members, older men, strangers, colleagues, friends and boyfriends, but there is a pattern in their behaviours. In most accounts, it seems to be a sense of power in taking advantage of a woman in a vulnerable situation, and in others, there’s an obvious indication of entitlement to sex. In far too many accounts, the perpetrator did not realise that what they had done was rape or even that they had done something wrong.

The book is emotionally hard to read and some parts of it will hit close to home for virtually every woman because it shows how rape and sexual assault can take so many different forms. Where any allegation of rape is made, rape myths are ever-present. These myths see ‘real rape’ as committed by a stranger, involving violence and immediately reported by the victim. As 100 Women I Know demonstrates, a lot of the time instances of rape are actually committed by someone known to the victim. Rape myths also involve victim-blaming, where the behaviour of women from their drinking habits to their previous sexual partners is used to infer fault or dishonesty. The accounts in 100 Women I Know show that experiences of rape and sexual assault that do not fit the idea of ‘real rape’ are just as painful. In one woman’s account, she sees the ‘lesser’ levels of violence by people she knew and loved to hurt more because of the loss of trust and feelings of worthlessness that came with her pain.

One account apologises for the spelling errors at the end and the blunt, rushed-through tone of that account conveys the pain behind it more than the words themselves

What is also a significant theme brought in towards the end of book is just how few women report rape and sexual assault. There is a statistic that shows only 7% of survivors reporting the incident to the police because of the fear of blame and the trauma of going through the criminal justice process. One page shows five quotes from women who had stayed silent about their experiences from periods ranging from 3 to 15 years before they told anyone.

The book was designed by Rebecca Souster and edited by Phoebe Montague and Kezia Bayard-White and the way that the accounts are laid out are a part of its impact. The juxtaposition of short snippets of detail with the accounts from a different person address the similarities between different incidents so well that they could be a part of the same story. Every so often there is a black page featuring the photograph of a woman. These are the most impactful pages in ensuring that the accounts and eye-opening statistics feel real. Each account is printed in its true form, reproducing the voice of the woman who wrote it, unedited; one account apologises for the spelling errors at the end and the blunt, rushed-through tone of that account conveys the pain behind it more than the words themselves. It is the unashamed honesty in this book that is the most powerful.

Dr Fiona Vera-Grey, a researcher in violence towards women and girls, wrote the book’s foreword. “100 Women I Know is a call to action”, she writes, “addressing the need to combat the structural barriers that women face around sexual violence”. We, as a society, need to shift the focus back to the actions of the men that commit sexual offences and away from the blaming of women. This book is a necessary read, drawing attention to the need to change how we view rape, to improve sex education and the criminal justice process and to empower more women to share their experiences.

100 Women I Know is published by Break the Habit Press. The book was designed by Rebecca Souster, edited by Phoebe Montague and Kezia Bayard-White and has a foreword by Dr Fiona Vera-Grey. It is available to purchase here: http://www.foyles.co.uk/witem/biography/100-women-i-know-candid-accounts-of,kezia-bayardwhite-phoebe-montague-9781999894108.

The image used is the cover of the book ‘100 Women I Know’. It’s a simple design, with a cream coloured background. The title ‘100 Women I Know’ appears in the centre, with each word on a different line and aligned right. Beneath the title appears a small ‘Venus’ symbol. The sub-title ‘Candid accounts of rape and sexual assault’ appears below.