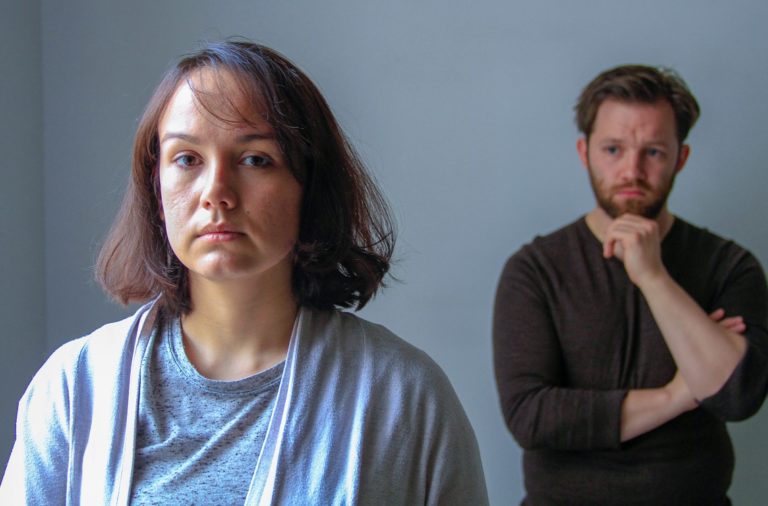 Anxiety, quirks and being unlike the other girls

Mike Heath’s The Big Things is a play that follows the lives of Grace (May Cunningham) and Malcolm (Matthew John Wright) from the early stages of their relationship throughout their married life. It is a moving, thought-provoking play.

Grace has a few odd “quirks”. She gets very focused on specific things, is quite particular about her preferences, is very good at maths and logic and doesn’t seem to have a very good grasp of social norms. Those are the things that Malcolm finds endearing about her, so they soon find themselves in a relationship. He confesses his love to her and some time later she proposes to him in a shop. She doesn’t understand why people are staring at them and becomes anxious, as she often does, about whether she did something wrong. But he happily accepts her proposal.

Then, in what Malcolm sees as the next inevitable step, he suggests that they have a child. Grace is clearly reluctant, but agrees to it in the end, reasoning that marriage is about compromise and since he said yes to her proposal, so she should say yes to this new suggestion.

We then see them confronted by all sorts of day-to-day issues such as having to decorate their flat, deciding who should work and how much after the child is born and organising childcare and other household chores.

Many the scenes are filled with anxiety and often palpable distress. I find the play hard to watch at times because of how well the actors portray the difficult situations. But then there are also scenes and exchanges that are really funny. As the play progresses, the vibe shifts from being humorous and fun to more serious and anxious, but even towards the end of the play there are still opportunities to laugh.

Grace finds it difficult to bond with her son, referring to him as “it” and not showing him much affection or interest. This prompts Malcolm to suggest that she see a therapist, who then diagnoses her with autism. This diagnosis makes her question herself and ultimately leads to her taking medication for her condition.

The Big Things is rather vague about this medication. It makes her sleep a lot and miss work and it’s not clear why it was prescribed or what positive effect it is intended to have. This is a controversial topic, which perhaps should have been covered with a bit more thought or left out. As it stands, the play appears to demonise taking medication altogether, which is a questionable message to send.

Once the child is born, the parents default to the idea that she should be the primary carer while he works. She is being pushed into roles that she doesn’t want and is then reprimanded and yelled at when she doesn’t fulfil these roles well It is also worth thinking about this play from a broader perspective that considers the perception of women’s role as mothers. It is common for women who are not interested in having children to have their judgement and their preferences questioned, to the point where it is difficult for them to make decisions about their own bodies such as having their tubes tied. In The Big Things, we see Grace making a decision to have a child that is clearly not one she would have made independently. Once the child is born, the parents default to the idea that she should be the primary carer while he works. She is being pushed into roles that she doesn’t want and is then reprimanded and yelled at when she doesn’t fulfil these roles well.

In one scene that is rather frustrating to watch, Grace complains to Malcolm about the other mothers at her son’s school. As Grace is a complex and interesting character that is generally well written, it is very annoying to see her pitted against other women with this “not like other girls” mentality. This attitude doesn’t seem to necessarily have anything to do with her autism and is very specifically directed at the way the other women look and choose to present themselves. It feeds into the common narrative that female characters can only be interesting and worth telling stories about if they are fundamentally not like other women. It might have fit better into the play if Grace had compared herself to other people on the basis of her autism, but this superficial comparison adds nothing.

Baron’s Court Theatre, located in the basement of a pub, is a venue that definitely suits this production. It’s a very small space and the audience is close to the stage and the actors. There are several scenes where Grace says she is being stared at, involving the audience in a somewhat uncomfortable way that encourages us to ask ourselves whether we would stare at people in similar situations and how it might feel to them.

Overall, the play is well written and stimulating. While there are issues within it that should have been handled with more sensitivity, it is well worth watching. It is very engaging: the characters – particularly Grace – are interesting and complex, the actors are good and the production flows well. If you go, you’re in for a thought-provoking evening.

The Big Things plays at Barons Court Theatre until Saturday 5 May. Tickets here.

The feature image shows two people. One stands closer to the camera and looks seriously, and possibly a little blankly, at the camera. The second person stands further back looking contemplatively at the other.

The second image shows the same two people laughing with their arms around each other. They both wear muted colours and are against a grey background.