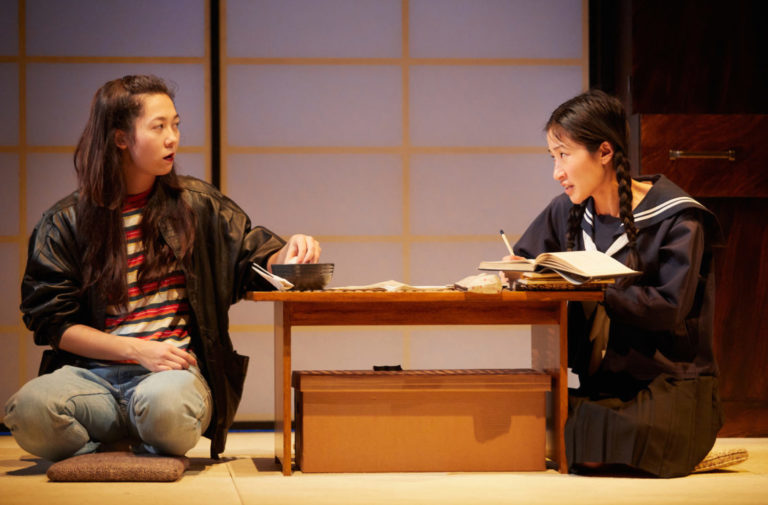 Francis Turnly’s The Great Wave, approaching the end of its run at the National Theatres’s Dorfman space, is a monumental play which confronts the audience with questions of love, loss and surveillance. Initially slow, the play becomes fast-paced, deeply touching and thought provoking by its second half.

Turnly tells the story of a Japanese family consisting of a mother and her two daughters, Hanako and Etsuko. One day, their lives are irrevocably changed when the youngest daughter, Hanaka, disappears. The play explores the emotional response to losing someone and, as the play unfolds, how we come to terms with a political world whose behind-the-scenes machinations can pose a strong threat to us as individuals.

The opening feels somewhat slow owing to stilted dialogue leading to some stiff acting, but soon the play catches fire and burns brightly until its powerful ending. The scope of the play is broad, covering life inside both North Korea and Japan, but instead of taking a wide-angled approach, Turnly opts to explore the events through the focus of a close-knit family.

Close to the beginning of the play, Hanako fights with her mother after getting into trouble at school. Her mother leaves for work and Hanako persuades her sister’s crush, Tetsuo, to go to the beach with her. Hanako does not return. Soon we see her in North Korea while her older sister, Etsuko, remains in Japan.

Both sisters are portrayed simultaneously, thanks to the revolving set, a device which is very effective in showing the effects of nurture on an individual’s development. As the play progresses, Hanako becomes more obedient, law-abiding and observant of rules – traits which were demonstrated by her sister Etsuko at the beginning of the play.

Etsuko, by contrast, is the bookish and uptight counterpart to her livelier and more rebellious sister. However, as the play goes on and she loses her sister, it becomes clear that there is steel underneath the bookish exterior.

The juxtaposition of the two sisters helps to highlight the two very different nations that become ‘home’ to them. Turnly does not necessarily provide fresh insight into North Korea, but it would be unfair to criticise this given it is notoriously the most secret country on earth. Just to have North Korea depicted onstage felt new and interesting – it’s rarely done.

There is political truth to the events that occur in the play. Japanese civilians were abducted by North Korea between 1977 and 1983, under Kim Il-sung’s leadership. Hanako’s tale mirrors the true story of Megumi Yokota, a 13-year-old girl who was abducted from Japan. She became famous as a poster girl for the Japanese movement which sought to gain the truth about abductions from the authorities. It is implied in The Great Wave that the Japenese authorities are aware of what might be going on, but deliberately cover it up for the sake of peace with North Korea. This raises larger interesting questions about our complicity and potential wilful ignorance of events that are easier to forget than to truly engage with.

This play is politically complex and yet at the centre there is an emotional beating heart without which the play would not work. The piece focusses on what the events tell us about the characters, which ensures the audience’s sustained interest and investment in the story.

Kirsty Rider is magnificent as Hanako and she has the hardest job of all. She really plays two characters: the vibrant girl growing up in Japan and then, years later, a much more subdued person enslaved by the North Korean regime. Our inability to determine whether she is truly brainwashed or simply acting as if she believes in the North Korean state for the sake of self-preservation adds further nuance and realism to her performance.

Rosalind Chao is superb as Etsuko, Hanako’s elder sister. Her character is arguably the best written one, holding more depth than the rest. She provides many of the play’s comedic moments when she stands up to her mother and the Japanese authorities. The play centres on the emotional cost of losing someone you love, which is excellently portrayed by Kae Alexander as the mother. Similarly, the guilt of feeling responsible for her loss visibly eats away at Leo Wan playing Tetsuo.

It is impressive in the text how the North Koreans aren’t reduced to mindless worshipers of the regime, although this is how they appear on the surface. Kwong Loke in particular does a skilled job of suggesting depth behind an obedient facade . The goal of North Korea is seemingly to obliterate the identity of its civilians, but Turnly’s demonstration that some trace of individuality will always remain feels like an optimistic comment on the human spirit.

Although the acting is superb, the writing for the three female leads feels occasionally flat. Even so, the neatly packed plot, which unfolds with incredible pacing in the second half, more than compensates for this.

Overall, this is a powerful production which will leave you with many political questions and, most of all, with a faith in the human spirit’s ability to overcome adversity.

Image one is of Kirsty Rider and Kae Alexander in The Great Wave and was taken by Mark Douet. It shows two women kneeling either side of a low table looking at each other. The woman on the right wears a Japanese sailor-style school uniform and is writing in an exercise book. The woman on the left wears jeans and is picking some food out of a bowl with her hands.

Image two is of Rosalind Chao and Kae Alexander in The Great Wave and was taken by Mark Douet. It shows two women holding each others’ arms and looking excitedly forwards. The woman on the left is holding her hand to her mouth. They both wear black and white dresses, and the woman on the right also wears a beige cardigan.