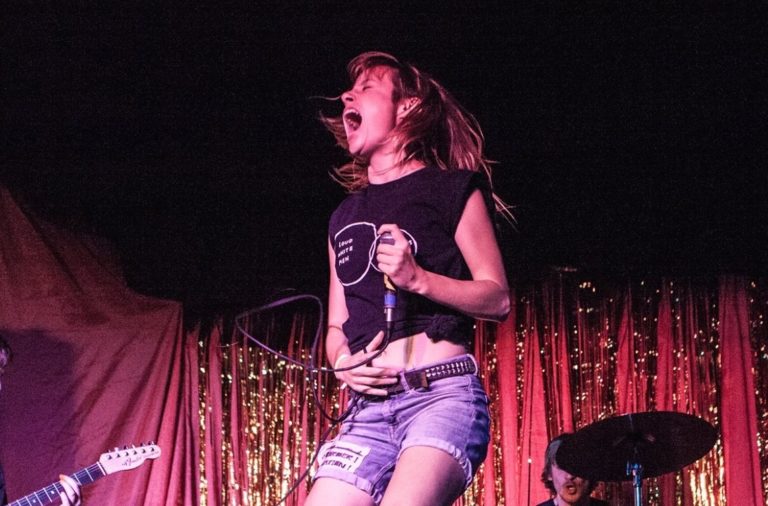 Say it loud, sing it loud What if the next, or current, wave of feminism, actually brought about a communal sense of “Fuck this shit”? Regardless of how you categorise ongoing western feminist efforts (whether you count it third, fourth or fifth wave, or as a relentless surge that refuses to pull back), what if someone swiftly followed up said sentiment of “Fuck this shit” with the following proposal: “Let’s have fun.”

Let me be clear, my point is not to dismiss the multiple, complex and intersectional challenges (that the word challenge does not even begin to do service to) women around the world experience, encounter, call out, oppose or outright fight. However, it occurred to me while in conversation with feminist friends last week that, when reflecting on feminist-focussed events or gatherings I’ve participated in, I describe the experience as inspiring, empowering (another word that doesn’t begin to do justice either), challenging, educational, maybe even draining, but I don’t think I’ve ever used the word ‘fun.’

Why not? I would like to use the word ‘fun’ more, especially as it pertains to feminist gatherings and events. I’m not alone. “Yeah, a lot of feminist events and topics can be a bit humourless,” observes Loud Women founder Cassie Fox, albeit respectfully.

I think I may have found a credible source of feminist fun to bring a little lightness to championing the cause, as it were, from time to time. Loud Women’s Fox is positive. Her voice has a positive tone. The language she uses is positive. And she offers to fit in interviews after working all day, slap bang in the middle of her kids’ teatime, to accommodate time differences. Only a positive person would attempt to do that. I would say I get the impression her feminist glass is half full, but with Fox having been a musician in numerous punk bands, both in the past and present, I’m guessing she doesn’t do much by half measures.

We also think it’s very important to pay our performers fairly. This is especially important for female musicians

Loud Women came into being as a festival when Fox and her friends (who were also in bands at the time) came to mutually recognise how limited room for women in their local London music scene was. “We wanted to play at an event where we felt part of it, rather than being a token female band or an opening act,” she explains.

Fox approached a few friends with the idea of booking and promoting their own gig and thus, the Loud Women festival was born. The inaugural event proved both successful and a positive experience and as often happens, success begets success. Indeed, in a time and place where festivals abound, the Loud Women festival has experienced profound success. The festival now receives hundreds of applications from bands and artists hoping to be included. And this year, due to the overwhelming demand for tickets to 2017’s events, Loud Women are planning on accommodating twice the number of audience members too. As Fox explains, “Last year we sold out and had to turn people away. This year we hope that everyone who wants to come can come.” Loud Women operates as a non-profit organisation whose efforts go far beyond the not-at-all-simple organisation of an annual festival. Since that first event, they have organised regular monthly gigs in and around London that continue to provide a platform, figuratively and literally, for female musicians keen to take part in Loud Women initiatives and as Fox explains, “We haven’t found that we’ve had to seek out musicians, they approach us and are usually really keen to join in our events or support our mission.”

Loud Women’s social media accounts enable an online interaction between women interested in music from all over the world and provide a way for these women to share tips, resources and encouragement. The Loud Women team also regularly update a recommended listening list on their website as well as creating and distributing a monthly ezine in a distinct do-it-yourself (DIY) style. Compilation albums containing songs performed by a variety of the female musical artists and bands championed by Loud Women are also periodically created, promoted and distributed.

Though Loud Women operates as a non-profit themselves they’re more than willing to support, and collaborate with, organisations that support women in other social realms. For example, all profits from the sales of the Loud Women compilation recordings are directed to UK based Women’s Aid, a “grassroots federation working together to provide life-saving services and build a future where domestic violence is not tolerated.”

Loud Women is a truly grassroots-founded and volunteer-led initiative however, as their success continues to grow, so does the need for support. Three individuals have recently been hired to oversee the regular monthly events. “We’re doing so much but it was important to me to not take our eyes off of our regular gigs so we now have staff to help with those events,” Fox explains.

Inclusivity is an inherent key element of the organisation’s values and programming. Loud Women strives to be as inclusive as possible in their line ups and accessibility to audience members, including being sensitive to different income levels and providing fair pay to hired staff and performers. As Fox states, “We know attending events, especially in London can be very expensive so we aim to enable everyone to come out who wants to. We also think it’s very important to pay our performers and to pay them fairly, not just a ‘token pay.’ This is especially important for female musicians.”

Though the organisation’s website describes how, “Loud Women is a group for all those who support putting women on stage, and turning up the volume,” Fox describes how ultimately, Loud Women strive to create a fun and relaxed atmosphere for all event participants, and with much success it seems. As Fox observes, “A lot of band members bring their mums along. I think that’s a sign of a good space.”

Creating a space where performers and attendees feel safe and welcome has also resulted in the education of venue staff. After reports about negative behaviour on the part of venue workers at the first festival, Fox and Loud Women approached the venue management team and the outcome proved positive. “We worked very closely with the venue to improve their awareness of what a safe space looks like. There’s an accountability aspect on the part of the venue to ensure that their space is a safe space.” Fox describes how their events are trouble-free, thus venues like having their group as clients. This has resulted in promoters reaching out to Loud Women for advice on how to best go about creating safe and inclusive spaces for their events. “Part of our remit is now talking about what gigs could look like,” explains Fox. Loud Women also supports gigs featuring female musicians and female-led bands outside of London. This is realised by Loud Women sharing their advice with other groups and artists looking to set up similar initiatives, and by endorsing gigs in other towns and cities that provides a level of connectedness and support. Other groups and gigs Loud Women have supported or have collaborated with include The Lady Luck Bar in Canterbury, Kent, Le Pub in Newport, Wales and Fallopian Tunes in Brighton. Given that Fox is involved with several bands, her tours around the UK also enable her to reach out to artists in other communities and connect through feminist music efforts.

We have a crowd that turns up when they know it’s a Loud Women event, they know it will be a good night

Not ones to keep quiet, Loud Women’s initiatives are also projected beyond the UK. The organisation has been approached by groups in the US and Europe, and later this year the team will be collaborating with an organisation based in the Netherlands, ‘Girls Go Boom,’ to facilitate the first Loud Women event in Rotterdam. “We’re always happy to work with other promoters and groups doing similar work in the field to support each other’s efforts and women in music,” states Fox.

As summer approaches Fox explains that organising and promoting the festival becomes a priority. However, the momentum of Loud Women’s mission and projects, both current and in the pipeline, continues. “We’re always looking for more bands and to put on more gigs,” Fox explains. The Loud Women founder also admits that, “There’s always more and more ideas too,” all aimed at encouraging women in music. “We would like to run training and development workshops for women to learn more about music and increase their musical skills. For example, it’s good to know how to deal with being in a studio or how equipment works so you’re forearmed when you play in front of a sound engineer or tech who is probably male.”

Loud Women also now incorporates other art forms into their events, such as spoken word poetry, to broaden potential audience appeal although they seem to have a rather loyal and ever-growing fan base. “We’re lucky that we have a crowd that turns up when they know it’s a Loud Women event even if they don’t know who the bands or artists are, they know it will be a good night.” And fun no doubt.

If you’d like to find out more about Loud Women, the work they do, and how you can get involved you can visit the Loud Women webpage. But you might also be best following Fox’s advice: “Check out our Facebook group page, it’s a great place to go to get ideas. Women and groups from all over the world are reachable there. It’s fun.”

Loud Women Fest 2018 is scheduled for 15 September in London.

The feature image is a close up of the Petrol Girls photograph.

Image one is a selfie of Cassie Fox (centre) flanked by Lorna (left) and Abby (right). The three have been captured setting up for the main Loud Women fest in 2017. Photo by Cassie Fox.

Image two is of Petrol Girls performing live at Loud Women fest. The singer is leaping in the air. Photo by Keira Anee.

Image three is of Tegan Christmas of the Ethical Debating Society performing live at Loud Women fest. Christmas has bright red hair and is pictured directly next to the front row of the audience, up close to them. Photo by Keira Anee.