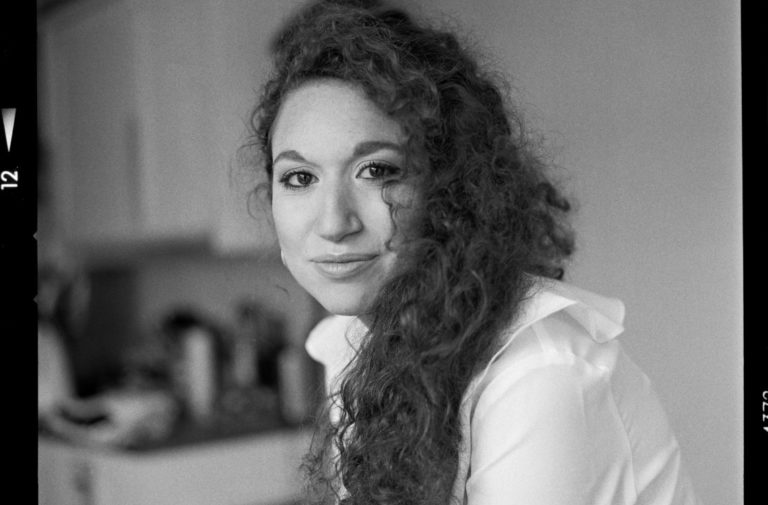 Folk-soul singer-songwriter Marie Naffah has gained the support of XFM, Absolute Radio and NME, amongst others. She was also crowned MTV’s Unsigned Artist Of The Year in 2014.

Arguably, none of these accolades are Naffah’s biggest achievement. When her grandmother was diagnosed with age-related macular degeneration (AMD), Naffah’s music career halted. Industry parties, touring and working with major producers became secondary to a new musical project: Blindfold.

Blindfold began as an attempt to better understand her grandmother’s experience with AMD. However, it swiftly became something bigger. What began as a song became a collaboration with blind and partially sighted musicians. I ask Naffah about the evolution of Blindfold, from song to project, and what she’s subsequently learnt about equality in creative industries.

When and why did you start producing music?
I started writing and making my own music when I was about 14 years old, but I started taking it a bit more seriously when I was 18, when I was exposed to the wonderful music scene that London had to offer. So, I gigged a lot there, and built up my confidence gigging. Then in my 20s, I was awarded MTV’s Unsigned Artist of the Year which solidified my want to do this, and I’ve been hooked ever since.

How did winning MTV’s Unsigned Artist of the Year change your career?
I’d say that it gave me a backing that I was really lucky to have. It put me on the bill with people like George Ezra, Sam Smith – artists that I really respected, which was incredible as a unsigned artist, as you can imagine. It led me to a lot of amazing people in the industry, who are still standing by and supporting. It’s just an incredible accolade to have such a powerhouse support you and rate your music.

Sounds that there’s been lasting benefits! Can you tell me a bit about your Blindfold project?
Yeah, of course! I teamed up with a group of six blind and partially sighted musicians to create a 12-minute-long documentary called Blindfold. It consists of a series of interviews with musicians candidly discussing their relationship to music, and ends with a performance of all of us performing a song I wrote called ‘Blindfold’. The aim of the project was to initially raise awareness about the different types of blindness. Then it became more about people thinking about disability in the creative industry, trying to challenge people’s perceptions about creativity and talent.

I understand that ‘Blindfold’ was originally a song you played by yourself. Why did you decide to move from playing the song by yourself to recording it with blind and partially sighted artists?
When I wrote the song, I wrote it because I was influenced by my grandmother who had the illness macular degeneration, which meant that she lost her sight over a long period of time. It was a very personal song to me. The subject matter was all about blindness and I felt that it didn’t really fit in my set. I thought the song was definitely unique and it deserved to be used in a different way. That was when I decided to put out an advert calling blind musicians to come and be a part of the project or trying to see if anyone would be interested in taking part in this project. I got really lucky meeting these incredible individuals who shaped the whole thing. The whole experience would be nothing without them.

Obviously you’re a musician, not a doctor – what advantages does your creativity give you when exploring macular degeneration and blindness?
I think that first and foremost we are musicians, but it doesn’t mean we can’t use our role as musicians to do something that will contribute to the bigger picture. I really feel that music allows you to express yourself, or it allows me to express myself, and it’s a way of connecting people as well. I felt that the creative industry has a way of connecting people in an accessible way and that was really exciting. I’m definitely not a doctor, as you said, and I’m definitely not an expert in the field. I can’t speak on behalf of everyone – the Blindfold project is just a microcosm of what we can do if we just thought a bit more about equality in the industry, just for a bit.

Speaking of experts, I understand that you worked with the Royal National Institute of Blind People. How did their input enhance the project?
I got introduced to a fantastic lady who’s head of music at the RNIB, Sally Zimmerman, who guided me a lot with how to approach the topic. I didn’t really know how to begin. I didn’t know how to start. I didn’t know any blind people. I didn’t have any blind friends. She also allowed me to post an advertisement asking blind musicians to be a part of my project and through that I found the six incredible musicians who I mentioned before.

What did you learn about the experiences of creative blind and partially sighted people from these six musicians?
They were really inspiring guys, and I actually think they taught me so much more than I could have ever predicted. The main thing was that they sort of opened my eyes to the quite horrible truth that people weren’t just not thinking about disabilities in the music industry, but in certain cases disabled musicians were being actively rejected from creative endeavours.

For example, the drummer in the project told me a story. It’s a horrible story, about how he got turned down from a job as a sound engineer because the person said: “I just can’t deal with the whole blind thing”. And my friend Kevin, who’s also blind, had the phone hung up on him when telling people that he’s a blind pianist. And I think it’s embarrassing that in 2018 and in London, one of the most progressive cities in the planet, we can still be naively discriminating against disabled people in the industry.

Has the Blindfolded project finished now?
Yeah, I suppose that segment of the blindfolded project is finished. I’ve kind of been thinking about it as kind of an umbrella over multiple projects. Although the documentary was made a few years ago, I then got to give a TEDx (Technology, Entertainment and Design) talk in London, about how disability and creativity shouldn’t be mutually exclusive. I’d like to do future projects: I’d like to work with younger blind musicians, I’d like to work with people who might not necessarily have the confidence to put themselves out there in the music industry. It’s an exciting time and, now having friends who are blind, it’s very helpful to go back and forth between the team about what we can do next.

That does sound exciting. What was your grandmother’s response to all of this?
My grandmother was very touched by the project. She was a creative herself – she was an actress in her prime, and I think she was very thankful that her legacy can live on and turn into something very positive. It was exciting to share something so personal to me with other people.

You can view the full Blindfold documentary and track here. For more Naffah goodness, check out her debut single, ‘Let Me Wilt’ and learn why “being yourself has never been cooler”.

Image is a black and white photo of singer songwriter Marie Naffah, with a ‘negative’ style black edge. It was taken in London in April 2017. The image is a head and torso shot of Naffah, her body sideways on to the camera, her face turned to face the camera. She is wearing a white shirt and has long curly dark hair. She is smiling. Photo of Marie Naffah courtesy of Maddy Raven at Burstimo PR.