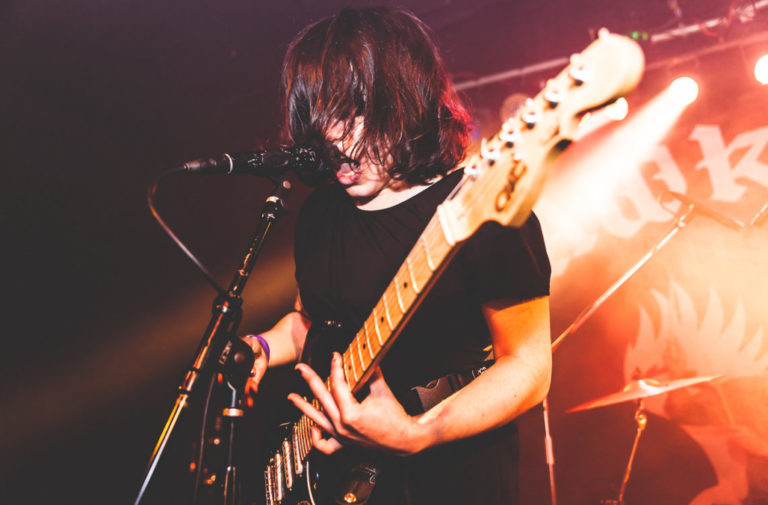 Scenes from a life gallery

Screaming Females have been playing together for over a decade and their do-it-yourself attitude has served them well throughout their career. They have released six studio albums and collaborated with the likes of Garbage, The Dead Weather, Arctic Monkeys and Dinosaur Jr. They have developed a deeply individual sound with 1980s power rock influences heard alongside aggressive punk. Following the success of 2015’s Rose Mountain, the band decided to work with producer, Matt Bayles (Pearl Jam, Mastodon, Murder City Devils) once again on this record. All At Once is a concept album of sorts with the intention being to make an album in the style of an art gallery show where larger pieces stand out against a backdrop of smaller, more experimental works.

Satisfying guitar jabs introduce the title track ‘All At Once’. This is contrasted by sparse harmonies and an accomplished vocal performance by Marissa Paternoster. The intensity increases towards the end and becomes gloriously angsty. The production is crowded and echoes the sense of claustrophobia evoked by the lyric, “My life in this glass house, impossible to get out”. This song explores the risks of excessive exposure to social media and the lack of privacy in the digital world. This is a thread running through the album, one that is approached again in ‘Fantasy Lens’.

The following track, ‘Black Moon’, has more of an alternative rock sound, and influences such as Shirley Manson of Garbage (who has collaborated with the band) can certainly be heard here. Paternoster expertly crafts everyday experiences into lyrics that relate to the wider world, and ‘Black Moon’ is a great example of this. “It’s a song that sounds like it’s a breakup song, but it’s really about the planet abandoning humanity,” she explains in their press release.

Subtle, relatable lyrics of everyday emotions and anxieties, which contribute to a wider understanding of the world

The cosmic imagery in this track is also a recurring theme throughout the album as we hear this again in ‘Bird in Space’, which is filled with nature imagery. Here we see a more positive, reflective outlook in the lyric which views the world from the outside, looking in. The mix has a lot more space than the other tracks on the album and this emulates the flight of a bird. There’s an impression of jealousy and longing to “…look nice like a bird of paradise.”

My favourite track is ‘I’ll Make You Sorry’. This is the pop punk song of the album and would sit well with the likes of Honeyblood. The video features the band playing alongside an abandoned construction site within a derelict warehouse. The pop chorus “I once was in love before…” is wonderfully catchy and infectious. ‘Agnes Martin’ is another standout track for me. Riff laden and choppy, this is a homage to Agnes Martin, the Canadian abstract painter who famously said that “Art is the concrete representation of our most subtle feelings.” This is certainly what Paternoster endeavours to create with her subtle, relatable lyrics of everyday emotions and anxieties, which contribute to a wider understanding of the world.

‘Chamber of Sleep’ is another highlight of the album. This two-part track begins with an upbeat, naive sounding riff. This is much more akin to the pop punk of ‘I’ll Make You Sorry’, and Paternoster’s ability to alter her style from track to track reveals her skills as a musician. We also hear the synth organs again which add to the innocence of the track.

There is a west coast vibe in the bridge echoing bands like Best Coast. The lyric, “I’ve been waiting a long time” stretches far into the distance and transitions into a masterful guitar solo, again demonstrating Paternoster’s virtuosity. The transition to the second part of this track is the most experimental of the album so far and fades into a blur of sounds and synths in true art installation style. This is an interesting diversion, but Paternoster’s powerhouse vocal is very welcome as the main theme of the song repeats and we return to the more familiar world of alt rock.

All At Once is anything but safe

‘Dirt’ is somewhat calmer and a break from the anxiety driven pace of the opening tracks. This is a reflective pause in the album and a more experimental production with slightly discordant harmonies and interpretive lyrics. ‘Deeply’ follows, with the organ conjuring religious imagery in this subtle track. The beeps instill a sense of vulnerability, imitating the sound of a heart monitor, which pans across the mix and fades in and out throughout. The vocal is restrained and restricted, creating a sense of entrapment and claustrophobia. In contrast, the vocals and twinkling glockenspiel in ‘Drop by Drop’ are almost angelic in places.

The theme of control in ‘Dominium’ is captured by Paternoster’s gutsy vocal, which has a strong presence throughout this track. The guitar riffs mimic the vocal melodies creating a call and response that furthers echoes a sense of power and domination. The dense mix of ‘End of the Bloodline’ creates a feeling of distress echoed by the lyrics and “the desperate need to have it all.” The sense of claustrophobia is palpable in this neurotic arrangement, and doesn’t relent until the next track, ‘My Body’. This is a decorative piece making way for the more raucous, propulsive rock to follow. The art installation concept is really brought to life as Paternoster is painted as the subject of a life painting in brush strokes of various colours.

The finale, ‘Step Outside’ begins with a daring, experimental intro. However, a little before the song begins we are transported back to familiar territory. This is all about comfort zones, and this album has certainly seen Screaming Females step outside of theirs and embrace a more experimental style.

All At Once is anything but safe. Instead, it’s a successful balance of the driving garage rock that Screaming Females are known for, juxtaposed with tangential arty instrumentation which represents the subtle emotional corners of humanity and the world around us.

To truly see Screaming Females in their best light, don’t miss out on their UK tour in May.

All At Once is out now

Feature image is of Marissa Paternoster playing guitar live. The image is by Zach M Anderson on flickr and was taken on 30 April 2017. Used according to a Creative Commons licence