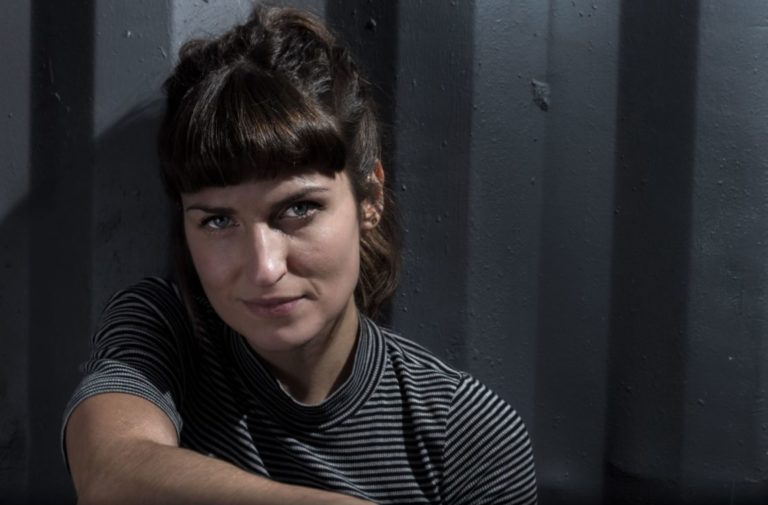 Victim, from Bruised Sky Productions and playing recently at the Kings Head Theatre in London, is a one-woman show telling the story of the relationship between a female prison officer and two female prisoners, one of who is accused of abetting in the murder of her child. The other is a prisoner who killed her violent partner.

There is something about mothers who are involved in the killing of their children that provokes huge public outcry and disgust. To society in general it seems inconceivable that a mother could be party to (and complicit in) the abuse and, in some instances, the killing of their children. Though of course it does happen. There was the case of Shafilea Ahmed, whose mother, along with Shafilea’s father, suffocated her with a plastic bag in front of her siblings. Rosemary West was involved in the abuse and killings of several young girls including her own.

But there has also been the case of Mick and Mairead Philpott who were convicted of killing six children. Some reports have alluded to the fact that Mairead was involved with Mick, 25 years her senior, from a very young age. While there was no doubt that Mairead had colluded in the arson, it was also made clear in the investigation that Mick had a history of abusing and threatening to kill his ex-partners. The investigation noted that Mairead would have been vulnerable to coercion and manipulation in supporting her husband to commit the fatal arson attack.

These instances are all relevant as I watch Victim. The play, written by Martin Murphy, features Louise Beresford who plays all three characters: Tracey, a prison officer, who talks of her increasingly strained relationship with her partner and their unsuccessful attempts at conceiving. Siobhan, a smart and quick-witted Irish woman doing time for stabbing an ex-partner. And the third person, known by a pseudonym, Marsha, who has been found guilty of murdering her own child. The audience is told that the child was killed having “the evil” cut out of it by her partner.

The play succeeds because Beresford is able take on these different guises effortlessly. She owns the stage and her accents, movements and storytelling draw the audience in

The play succeeds because Beresford is able take on these different guises effortlessly. She owns the stage and her accents, movements and storytelling draw the audience in. When playing Tracey, Beresford sits with audience members fully engaging us. Tracey’s story, which is often funny and silly, provides a much needed antidote to the rest of the play and sees Beresford really command the stage. In contrast to the other characters, Tracey’s partner is portrayed as a figure of fun.

Tracey becomes fascinated with “Marsha”, trying to understand her motives and actions. Perhaps as the public would if such a case was being reported, she finds it very difficult to understand why Marsha has taken full responsibility without providing any evidence against her partner.

While Tracey tries to engage with Marsha, it is Siobhan who uses her own experience of being abused to put a different slant on the issue. Siobhan describes her own account of being so completely controlled that as the victim/survivor she felt helpless while the perpetrator did unspeakable acts.

It is timely watching this play as ‘coercive control’ is something that is being more widely discussed now that it has been explicitly deemed a criminal act. The specific actions that are covered under the Act include “forcing the victim to take part in criminal activity such as shoplifting, neglect or abuse of children […]” Watching Victim, the audience only gets Siobhan’s or Tracey’s version of what may have taken place with Marsha’s child. Though perhaps this is the point; it is inevitably the interpretation of others that builds the picture of this horrific act based on snapshots of evidence and the individual lens we all use.

It is refreshing to hear women’s stories told on stage in this play; women in all their flawed and complicated reality. There isn’t a cosy sisterhood here either

Just after watching Victim, I watched the French film, Custody. Custody tells the story of a bitter divorce, with the children of the separated parents caught in the middle. The wife and children are terrified of the explosive anger of the estranged husband and father. Just like the story in Victim, the husband controls his wife and children through his aggression, unpredictable behaviour and by swinging dangerously between contrived gentleness and uncontrolled anger. His control is all-pervasive and also means he can manipulate the legal and criminal system.

It is refreshing to hear women’s stories told on stage in this play; women in all their flawed and complicated reality. There isn’t a cosy sisterhood here either. Any relationship is messy and in Victim, even more so when people have come together after surviving harrowing abuse.

It is interesting that the show is called Victim when in fact the characters all seem far from it. Perhaps the intention was to simply use the label society associates for women who have survived violence and abuse as it’s a label that is easily understood. It is certainly a provocative title, though this maybe might be my interpretation as I find the word “victim” highly problematic. The word “victim” gives a sense of passivity which takes away a person’s agency. While “survivor” suggests the act of surviving trauma to build a life.

While Victim may not be the most slick production – some of the dialogue is at times clunky, especially when Tracey is talking about attending a wedding – it is deeply relevant. It sheds light on an issue which society deems hugely taboo, that of a mother being involved in the killing of her child. While it has moments of light-heartedness, this is juxtaposed with its dark themes and a very harrowing ending. It is the sisterhood at its darkest.

The image is a photograph of performer Louise Beresford. She looks directly at the camera, with her arm, leaning on her knee, just in shot. She has dark hair with a fringe and hazel/blue eyes. She wears a stripey top.