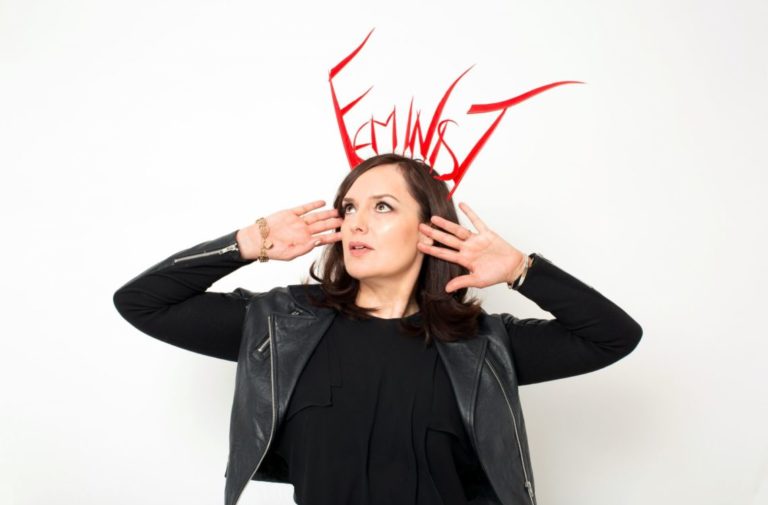 Are you a guilty feminist?

The Guilty Feminist podcast was originally founded in 2015 by Sofie Hagen and Deborah Frances-White. Hagen later left and works on her own podcast, Made of Human. Guest hosts such as Felicity Ward, Zoe Coombs-Marr and Sarah Millican now join Frances-White to discuss feminist issues in a comical way while admitting the less than feminist things they have done recently. Every episode starts with the phrase “I’m a feminist but …” where Frances-White and her guests admit to a ‘guilty feminist’ act.

The show explores how in theory many of us are trying to be good feminists, but in reality we are often guilty of thinking or doing ‘non-feminist’ things. However, the show isn’t about how good a feminist you are, or what you are doing wrong – as everyone knows, nobody is perfect.

In the episode ‘More than Wonder Woman’, Frances-White, alongside co-host Jessica Regan and special guests Sam Bain and Kate Phillips, discuss women in film and TV and the gender stereotypes faced by women in the industry. As the show opens, co-host and actor Jessica Regan admits: “I’m a feminist, but when I recently appeared on Celebrity Mastermind for charity, I spent more time researching the dress I would wear online than the general knowledge.”

This episode covers a serious and relevant topic: the patriarchal nature of film and TV, where women are often given a hard time right from the moment a writer puts pen to paper to create a female character. However, as a comedy podcast, this episode was more on the serious side and lacked some of the humour of previous episodes that make the show so memorable.

This subject also seemed to me to be less broad than those covered by previous episodes, for example things like “getting older”, “silence” and “male privilege” have been covered in the past, which are concepts that many people have experienced in some form. Personally, I found it more difficult to connect and empathise with this episode than I’ve found previously, due to the narrow subject matter.

In ‘More than Wonder Woman’ Jessica Regan and Deborah Frances White discuss the controversial BBC Two television comedy drama, Ill Behaviour in which Regan acts. Ill Behaviour was written by Sam Bain, one of the show’s guests, and is about two friends who kidnap and force their other friend to have chemotherapy in a basement after he announces he intends to choose “holistic, natural remedies” to cure his cancer. Ill Behaviour is especially relevant to the topic of the programme as Bain originally wrote Regan’s character, Tess, to be a man.

During the show Regan relates how when she asked Bain how he wrote so well for women, he answered simply: “I wrote a man and I changed the name.”

Later in the episode this is explored further. Bain was asked by one of his friends why the character he’d written couldn’t be a woman instead of a man, and since he could not find a good answer to that question he made the switch. He goes on to talk about how all the outrageous things that the character does become funnier and more transgressive once the character became a woman.

Regan responds to this with the theory that “it’s less familiar” to have a woman behaving badly. Bain highlights the stereotypical and sexist trappings of female characters, as he says the “trope of the sensible women” is a boring character, uninteresting and not a good part for an actor so why waste screen time on this.

Bain’s explanation of the creation of Tess’s character feels like something that could have been delved into more. Why couldn’t the character have been written as female, with a varied personality and depth, in the first place? Why should the audience view a female character doing transgressive things as more interesting than a man doing the same? Questions like this would have made the podcast better, opening up a more interesting and relevant conversation.

Frances-White points out the tragic reality that often if you listen to the women in the story, the plot would die: “women spoil the fun in sitcoms”.

Comically, yet cutting straight to the point, Frances-White jokes about the reality of the situation if Kaufman had been a woman

Taking the discussion of the stories we choose as a society to tell further, they move on to a documentary about a portrayal of Andy Kaufman by Jim Carrey, and how Kaufman was called a genius, yet was misogynistic and extremely difficult to work with. Because he was a ‘genius’, his behaviour was somehow excused. Comically, yet cutting straight to the point, Frances-White jokes about the reality of the situation if Kaufman had been a woman, commenting on his behaviour on the set of Taxi: “If a woman did that on a sitcom set, you would never have heard of her. Do you know why? She’d be fired within 27 minutes.”

Frances-White goes on to note how there is far too much examination of toxic masculinity in culture and that “society seems to be mesmerised by straight white men who are so indulgent about their own desire to disturb a system designed entirely by and for them. Fuck off, what are you subverting?”

In a typical episode of The Guilty Feminist the more generalised topics allow the audience and listeners to relate more to what is discussed. However, this subject, more specific to the creation of television and film, rather than day-to-day life leads to, in my opinion, less of a connection between hosts, guests and audience.

For example, normally halfway through each episode, the co-hosts talk about a challenge they did that week, often one relating to the overthrow of the patriarchy or removing sexist stereotypes and this section is often the one that seems the most relatable to the audience. In the episode ‘Fabulous!’, Francis-White explains that: “some days, honestly, I’m feeling a bit like I don’t want to be noticed or I don’t want to be looked at […] For my challenge I was going to wear my feminist hat, which if you’re listening at home, says “feminist” in feathers […] and I thought, do you know what, I am going to go to the polling station in my feminist hat and I’m going to vote and it’s going to be clear that I’m voting for feminism and anti-austerity.” The challenge here is to not apologise for being outlandish, fabulous or being a woman which feels like something many of us can relate to.

However, in this episode, the challenge was Regan reading a speech written as a character that she would not normally play. Although there were parallels to be drawn about putting people in boxes, and the speech itself was funny, I found this section harder to connect with because it was such a narrow experience. Of course in each episode the challenge will be more relatable to some people than others, but this challenge in particular was hard for me to engage with.

At the end of the show, Kate Philips comes on to talk about the 50/50 ERA movement which advocates for equality between men and women on stage and screen. “It’s not about driving male narrative away, that’s the thing, it’s about having an equal representation of men and women” she says. The plan is to “create an energy for change in the industry” from the writers to directors and to get more female writers involved and behind the scenes.

Despite this episode’s drawbacks, I’m still a fan of The Guilty Feminist. ‘More than Wonder Woman’ provides an insightful discussion into the TV and film industry, but it could be even better if the topic had been talked about in a way that was more inclusive for the audience and listeners.

More episodes of The Guilty Feminist can be found here.

The image is of Deborah Frances-White. She looks up and to the right while holding both her hands up to her head with her palms facing forwards and her fingers pointing to her temples. She is wearing a headpiece that says “Feminist” in spiky red letters and black clothing.