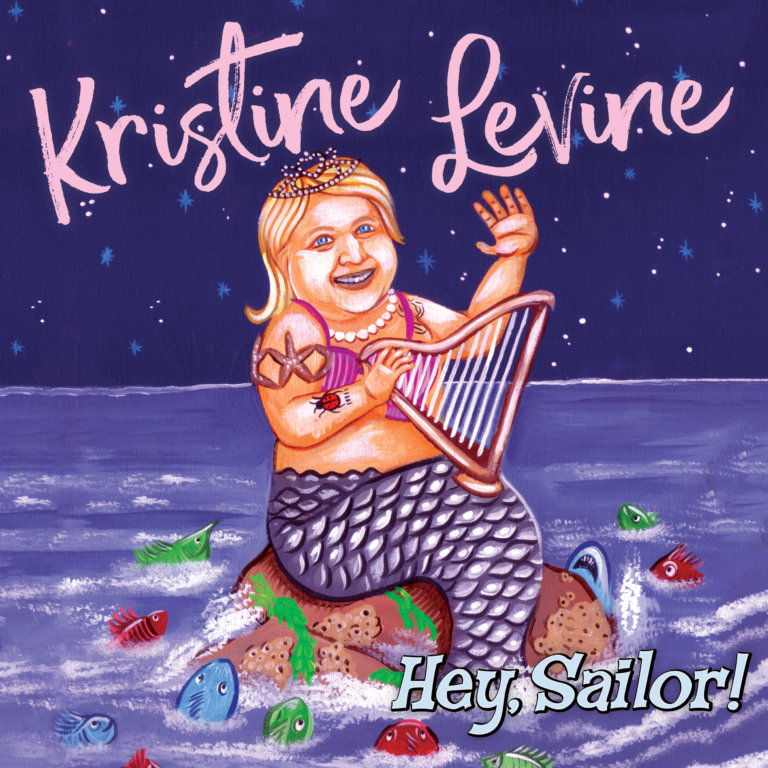 Hey, Sailor! takes US working class life, adds a touch of swearing, feminism and apathy, and makes a refreshingly honest and very funny show. It’s a real whirlwind; depending on your tastes, you’ll make up your mind pretty much in the first two minutes. If you’re not on board by then, you’re out; and she’s not going to wait for you.

The show recording comes fresh from Portland, a place she knows well from her time as an ensemble player on Portlandia – a TV sketch show set in and around the city. Levine is also known for her collaborations with controversial comedian, Doug Stanhope. She’s no stranger to using the darker, harsher sides of life for the purposes of comedy.

Subject matter includes getting recognised in the welfare office, breeding fat children, breaking the Guinness World Record for visiting 50 states in 50 days (and being the first woman to do so) and ripping apart Bruce Springsteen. Class, gender, children, appearance, health, music, money: there’s no boundary Levine will shy away from.

She might have a bit of a job finding a dedicated audience on this side of the Atlantic: too brash and boisterous for the mainstream, and a hardcore comedy audience won’t find much in the way of comedy ‘craft’ here. That’s not always a bad thing though, and Levine is genuinely likeable in a way that it is very difficult to put your finger on. Perhaps it’s her brutal honesty that makes her so appealing – a complete change from the reticence of many UK comedians. I also note that many of her more negative reviews are written by men, which may or may not be a telling fact …

She discusses how health is not always correlated to weight and is proud of her size, saying she “purposely bred with another large-sized land mammal” to have fat kids

Her laid-back approach to both life and storytelling almost hides the fact that Levine clearly works her butt off. She’s had a hard life working minimum wage manual jobs as an accidental teen mum in one of the poorest parts of the USA; she’s not been “destined for stardom” since birth, nor had the resources to become so. Yet her straightforward approach to work – and her hatred of it – is something very relatable. She treats work as something that just needs to be done, as it is for most of us, and she treats comedy this way too: one of her first comments on stage is to let us know she’s “clocking in” to work now.

A lot of feminist themes also ‘clock in’ here: most notably fat activism, debating the decision to have kids and sexual liberation. It’s a pretty great mix if I’m honest. She talks about how she always wanted fat children – seemingly half-joking, half not – as it’s the “American” way to have everything a little bit bigger.

She discusses how health is not always correlated to weight and is proud of her size, saying she “purposely bred with another large-sized land mammal” to have fat kids. Being a self-confessed fat, sexually liberated, opinionated teen mother means she’s had her fair share of abuse from strangers, but the most interesting thing is that there doesn’t seem to be any kind of built-up armour there to protect her: refreshingly, she just does not seem to care.

She’s not without controversy: she’s not a fan of Michelle Obama – for many, a feminist icon – and her campaign for healthier lifestyles. Levine follows her own brand of feminism: less about empowerment and more about giving less of a damn what other people think. She talks about mums who take their kids to after-school gym classes and declares she just “didn’t want to be that kind of mom”. Some may call it her own kind of empowerment, while others see it as just reckless parenting. I don’t think she cares which one you decide.

Kristine Levine is big, bold and brutal: a marmite comedian. It’s a personality-led show, so if you don’t like her personality, you might want to skip this one. For the rest of us, though, it’s an enjoyable, honest and liberating piece of chat. It’s true that there’s not much in terms of comedy technique, but that’s not necessarily a problem; if you’re looking for entertainment, it sure as hell is entertaining. You might not agree with everything she says, but she puts her point across with hilarious consequences. It’s one of the rare occasions where I actually enjoyed comedy that I didn’t always agree with.

Hey, Sailor! is available to stream or buy from many UK download sites.

The image is the front cover of the album. It shows a cartoon image of Levine as a mermaid sitting on a rock. She is grinning at the camera and holding a harp on her fish tale. She waves a hand at the viewer. The colours are pinks, blues and purples.