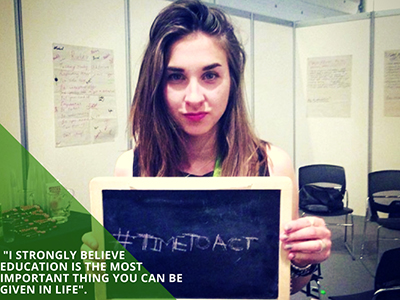 Lejla Damon is an activist who works with War Child and Remembering Srebrenica to raise awareness about sexual violence during conflict. Lejla will be speaking at number of events across the UK during Srebrenica Memorial Week (8th-15th July)

In the UK, some progress has been made toward gender equality. For example, discrimination legislation is slowly changing attitudes towards the role of women in society. Last year, the #Metoo campaign opened up a conversation about the lived experiences of women and girls that had been largely hidden before. But how long would it take for all this to unravel in a time of war?

I fear for the safety of women in future conflicts. In 2008, whilst on a mission in the Democratic Republic of Congo, Major General Patrick Cammaert, a UN Commander, said “It is now more dangerous to be a woman than to be a soldier in modern wars.” Certainly, this was true for the women of Bosnia, where an estimated 20,000 – 50,000 women, mostly Bosnian-Muslim, were subjected to sexual violence during the war in the 1990s.

Rape is a tool of humiliation used to destroy hope, happiness and a person’s sense of control over their future. I was the product of rape so I can only talk from my own personal experience. I am not a rape survivor, but I have seen first-hand the effects of rape on women such as my birth mum, whom I met for the first time since I was 9 days old last year.

I was born in Sarajevo, Bosnia, in 1992 after my birth mum was raped in a concentration camp. Nobody would wish for this start in life but this is the reality for some young people in Bosnia. I was adopted by two British journalists who were in Bosnia to report on the war. I was luckier than most of the children born of rape, who do not have a voice or receive anything near the amount of support I was given.

While so few of the perpetrators have ever faced punishment, rape is a life sentence for the victims. The children in Bosnia born of rape have been left behind and forgotten by their country. Well, they haven’t been forgotten by me and other organisations working towards trying to get them justice. As well as speaking to CBC Ottawa earlier this year, I spoke at a conference at the University of Ottawa, where the question was posed: how do we end sexual violence in war?

In this patriarchal world, rape is used as a weapon to break down the victim and her society. Women are raped because they symbolise a country as property and as the ‘source’ of a nation’s future. In the past, and in Bosnia today, the victims of wartime and genocidal rape were forced into silence. But I saw a lot of hope at the Ottawa conference; most of the people that were in attendance were women, speaking out and demanding attention.

This isn’t just a women’s issue. Women acting together in solidarity will force change as they have done on political rights, reproductive rights and economic equality. Men will hopefully join the discussion and we can’t achieve justice without everyone being involved. But women won’t say “Thank you”, just: “What took you so long?”

My special hope for the future of Bosnia is that its children who were born of rape will be recognised and will receive the help they need to achieve their hopes and dreams. Many are never told the truth about their origins; but they know, from the strain in their family relationships and from their own skills of deduction. Pretending bad things didn’t happen is no solution to putting things right.

This is true for Bosnia as it is for Myanmar and all the other places where rape has been weaponised. Governments and NGOs must go beyond pity and outrage and start information campaigns that provide encouragement to children born of rape, not secrets and shame.

We are the future. Our empowerment is the only future that matters for places where abusing and torturing women are weapons of war. Unless we are prioritised and recognised, there can be no peace. That’s why I am working closely with Remembering Srebrenica to make sure that the children of rape and the women forced to carry us, but unable to love us, are not forgotten.

Featured image courtesy of the author.

Featured image is of the piece’s author, Lejla Damon, holding up a chalkboard with the hashtag #TimeToAct, as part of the Remembering Srebrenica campaign