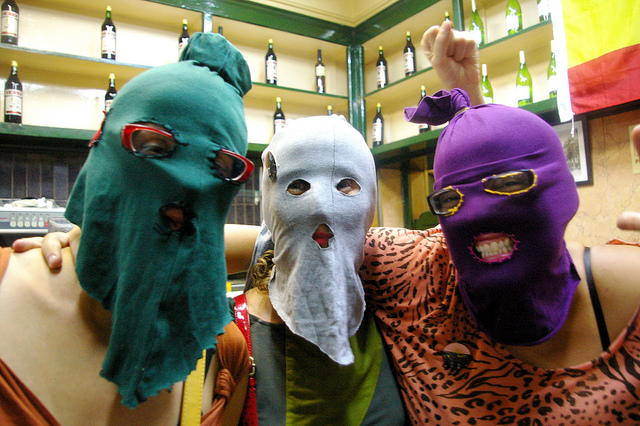 Feminist Solidarity: Cis and Trans People Will Not be Divided!(Solidarity Statement)

From the statement: “Trans women are an essential part of an intersectional and successful feminist struggle. The astonishing campaign in Ireland to legalise abortion patently understood that abortion rights and trans rights go hand in hand. March 8th saw the meeting of sex workers, trans activists, ex-detainees, immigration activists and cinema ushers march through London together to show the beautiful intersecting frontline of radical organising today.”

The ableist fight over plastic straws (Bitchmedia)[Discusses this issue from a US perspective but same debate is happening here.]

From the article: “At the heart of the blame arising from the sexual assault seminars, the researchers suggest, is the notion of control. Women can increase or decrease their chances of being assaulted – the logic runs – by adopting or ignoring certain protocols. Therefore, the chances of being assaulted is something that potential victims can control, and failure to do so therefore increases culpability.”

Skinny Shaming Is Not The Same As Fat Phobia (Melissa A. Fabello, Self)

Dude CEO of Feminist Apparel: Feminism Is Me Firing My Staff for Finding Out I Sexually Abused Women (Rebecca Fishbein, Jezebel)

Stop Asking Me If I ‘Saved Room’ for Dessert (Kate Willsky, Eater)

From the article: “… I get a text from a colleague who is listening to the story. It starts with “O god,” and informs me that not only are there no quotes from me in the story, as I already know, but that the book is now attributed exclusively to Stefan…”

A Workspace of one’s own (CLAIRE ZULKEY, Lenny)

From the article: “Working at the island all day every day, I’m like the unpaid receptionist for the house. I keep the fridge stocked and sign for packages. My husband comes by and eats his lunch behind me — in my office — while I eat my Amy’s frozen meals and read Ohnotheydidnt and yearn for solitude. There is a plastic potty, sometimes full of forgotten urine, on the floor less than five feet away.”

How the psychology of the England football team could change your life (Emine Saner, Guardian)

From the article: “[Pippa Grange, England team psychologist] wrote in 2013 that being a woman in a male team environment ‘is a constant navigation, for everyone. I have no interest in being one of the lads and I don’t quite fit in the ‘nurturing mother figure’ category in terms of the leadership work I do. I would be professionally ineffective if I remained in the background, psychologically safe with minimal voice, and I am not here to be the centre of attention as some form of entertainment. I don’t want to be completely separate because that would make me inaccessible and probably be a lonely place to operate from.”

“The era of hard-talking, tyrannical managers is over – both on and off the pitch. ‘Football, which I love and work in, is really bad at talking,’ says [Michael] Caulfield [sports psychologist]. ‘It does instructing and telling off but it doesn’t do talking and listening and empathy that well’ … Southgate, he says, realised early in his coaching career that instilling fear wasn’t going to work. ‘We all need a telling-off now and then – and he’s good at that, by the way – but you’ll get far more from putting your faith in people than you will anything else. People had this lazy opinion that he’s too ‘nice’ and they see kindness as weakness, but it’s the most unbelievable strength if you use it in the right way.’”

Erin Aniker’s quietly radical, feminist illustrations remind us that activism doesn’t have to be loud (Kieran Yates, It’s Nice That)

From the article: “Her work features women in bright colour palettes, with beatific smiles, stern frowns; with an overarching theme of togetherness, the women are often depicted in clusters, filling our eye-line with squiggly but clean outlines of powerful women. Her illustrations picture women raising their mehndi-decorated hands together in unison; brains split, with the minutiae of life’s worries spilling out of them, or women crying soft tears with the pain of motherhood, alongside a group of other women mirroring the same emotions behind her.”

Erin was previously an editor for the F-Word and you can read her previous work for the site HERE.

From the article: “We started to sell packages of education to each other and to victims of abuse and rape (child and adult) that assume that the REASON the child or adult was raped or abused, was because they couldn’t identify abusive behaviours and grooming tactics. Some companies and individuals got fat off the profit – some still are. They sell programmes to schools and tell the school that their work is ‘preventative education’ – to ‘reduce the risk of being abused’. This is absolute bollocks.”

From the article: “Yesterday the internet was awash with comments on Theresa May’s choice of outfit on Thursday evening for her state dinner with Trump at Blenheim palace. He wore a suit, and of course no one commented, but May’s dress was criticised for everything from its colour (red) and its cut (a slit at the back), to what she wore under it (not a good enough bra, apparently). She was shamed for her age, her body and her choice of outfit, and helpfully told what she should wear to be “age appropriate” and “flatter her figure”. While Trump is sometimes mocked for his appearance – namely his clear love for tanning beds – he is not judged on his ability to do his job on that basis.”

The image is used under a creative commons license with thanks to gaelx on Flickr. It shows a ‘Support for Pussy Riot party’ in Madrid. Three people with colourful balaclavas over their faces (or perhaps tights/stockings fashioned to look like balaclavas) pose for the camera. Only their eyes and mouths are visible. Two are wearing glasses which can be seen behind the balaclavas. One is grinning and the other two appear to be pouting, but it is difficult to tell. One has their arm raised in the air. Behind them there are shelves holding various bottles.