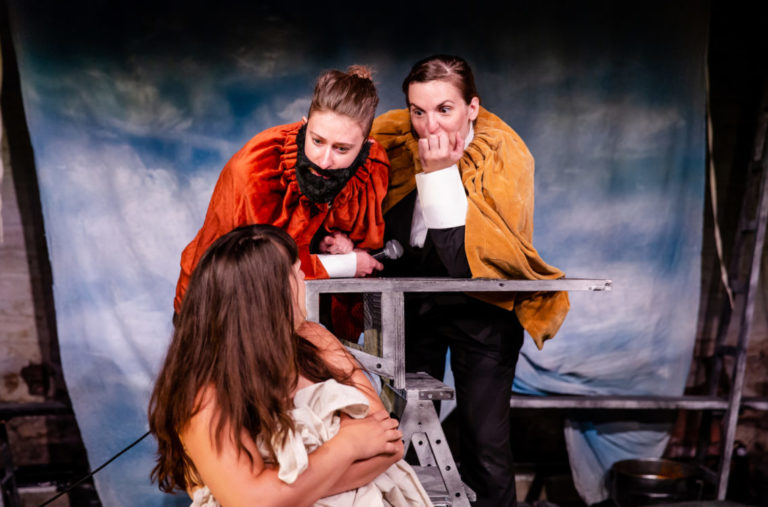 It’s True, It’s True, It’s True from Breach is a devised show based on the transcripts of the 1612 trial of Agostino Tassi for raping fellow painter Artemisia Gentileschi. It’s an excellent piece of work. The modern translation of the trial transcripts can’t help but bring to mind modern attitudes to sexual assault (he said to “calm down and [that] he’d been joking”), and as I watch I get angry not only on Gentileschi’s behalf, but also for all other women who have been lied about, disbelieved and discredited.

The three performers are all excellent. Playing multiple parts, they each bring a really strong specific physicality to each character and work well as a team. It’s a very inventive performance; at a couple of moments, the performers put on false beards or disrobe in order to act out scenes from Gentileschi’s paintings that support the narrative. And, the mix of music is great, with choral works from the Renaissance rubbing shoulders with The Slits.

The final five minutes of the show is less successful for me and doesn’t quite sit as well with the rest of the piece, but it’s an uplifting ending nonetheless. I believe her. Natalie Palamides explodes on to the stage at the Pleasance Courtyard as the character of Nate. Nate wears massive trousers and boots, has a jacket on over his bare chest on which he’s drawn on chest hair, a beard, sideburns and a black eye. He rides a mini-motorcycle, cracks eggs into his mouth, gobbles whey powder and challenges an audience member to a fight. He is essentially a caricature of masculinity, both toxic and not.

Palamides asks some audience members to be very involved in her show, and she pushes things quite a long way. I haven’t felt this uncomfortable since I saw Red Bastard and I’m not sure this brand of clowning is really for me.

There is however a lot to explore here in terms of consent, both in terms of the fictional world Palamides creates and the real-life world right there on the stage. Palamides is an extraordinary performer, genuinely doing something very unusual. I haven’t seen anything like Nate before. Baby Face gives us a messy, unflinching look at the reality of living in a society that infantilises women. Using physical theatre, music and dance, Katy Dye takes us through a number of powerful regressions that both draw us in and push us away, forcing the audience to confront both ourselves and the media we absorb.

Incredibly raw, the performance is a perfect example of an actor using their entire body as an expression of art: twisting, turning, punching, writhing, dancing, singing, screaming and gyrating, Dye certainly throws her entire self into the show. While not an autobiographical piece per se, there is something deeply personal about her performance.

This is certainly a show that isn’t afraid of making its audience feel uncomfortable. The infantilisation of women is something both very known and unknown to us as an audience; we recognise many aspects of the show – toiletry adverts, Britney music videos, a need to be needed – but Dye pushes them to the extreme. Some of the most powerful moments happen during the audience participation sections, where we are very much put face-to-face with our discomfort.

Despite the dark themes, there are some laughs and moments of real relief in the show and it is more unsettling and powerful, than all-out horrific. While it’s definitely not an easy watch, it’s an important one.

Ethereal and calming, the Sauna is a show of childlike wonder. Set in a Finnish sauna, the company use masks, body suits and puppetry to tell the story of an elderly woman’s visit there with an intention to die. Usually a solemn place, full of contemplation of life and death, the sauna has its own spirit, which distracts and irritates the old woman during her time there. This mythical creature then evokes her physical memories and takes her through the chapters of her womanhood as she considers the end of her life.

It’s not the clearest narrative on stage, but the process of telling it is truly compelling. The wordless action is accompanied by both live and recorded sound effects, created by an array of intricate and inventive instruments on stage. The masks of each character are beautifully crafted, and the actors on stage certainly know how to get the best out of them.

The importance of the sauna in Finnish culture shines through beautifully. It’s a relaxing place of deep thought, as is this performance: exquisite and humbling.

Beth Vyse as Olive Hands: The Hand That Rocks the Cradle (Comedy)
Until 26 August, 15:45, Monkey Barrel
Reviewed by Lissy Lovett

Beth Vyse introduces her daytime TV spoof with an impersonation of “the thinking man’s Cilla Black”, Paddy McGuinness, complete with enormous fake forehead, before handing over to the main character of her show, Olive Hands. Hands is a louder than life television presenter, desperate to reclaim her former fame and willing to stop at nothing for TV ratings.

It’s certainly surreal; at one point as Vyse passes a tape measure out through the audience she reassures us that: “it’s OK guys, it’s just weird, go with it …” We have a leopard-print gimp-come-handmaid to assist, face-painted audience members and Vyse’s own toddler makes the occasional appearance as her co-host, Tiny Hands.

Vyse’s comedy includes absurdism, terrible puns and more toilet humour than I’m personally comfortable with, but there’s a deeper message here as well about whether women can ‘have it all’ and postnatal depression after caesareans. This is a strange, funny hour from a comedian who’s not afraid to go too far. Lou Sanders’s show is loosely based on the theme of shame. In some ways it seems to almost make fun of a traditional Edinburgh standup hour: we have some sort of theme that ties in to the majority of the material, a bit of an arc and we finish with a heart-warming and rousing message to take away; all this is delivered in an appealingly off-hand and casual manner which belies its structure.

There are plenty of jokes relating to gender: she takes pot-shots at the lack of women on panel shows, the ridiculousness of supposed ‘ladylike’ behaviour and the societal power structures that shape attitudes to one night stands. She also covers her alcoholism, identity politics and her seemingly genuine belief in Shamanism.

Despite running a little under an hour, I feel like I’ve had my metaphorical money’s worth with Sanders. This is a funny, relevant and well put-together comedy show that I enjoy a lot.

The feature image is of It’s True, It’s True, It’s True by The Other Richard. It shows the three performers acting out Aartemisia Gentileschi’s painting of Susanna and the Elders. One performer sits in front of the other two, looking back at them. We can’t see her face, just her hair. She has a sheet wrapped around her and clutched to her chest. The other two performers lean over a ledge menacingly towards her. Both have curtains around their shoulders to imitate cloaks and one has a false beard. Behind it all is a backdrop painted like the sky.

Image two is of Natalie Palamides as Nate. We can see her from the chest upwards and she stands in front of some opulent theatre curtains. She has a bare chest with chest hair drawn on crudely with pen. She has a false moustache and wig with a white bandanna wrapped around it. She is making V signs, palms facing outwards, with both of her hands.

Image three is of Baby Face courtesy of Daniel Hughes. We look up at a performer sitting astride a child’s high chair. They are covering themselves with talcum powder, which catches the light.

Image four is of Teatteri Metamorfoosi’s Sauna and is by Soile Mäkelä. It shows a performer in a full body costume which looks like they have additional padding under tights gives the effect of a mask over their face. They squat with one elbow balanced on a knee.

Image five is of Beth Vyse by Idil Sukan. Vyse sits in a chair in front of a bamboo screen. She holds a baby in her lap. Both Vyse and the baby wear leopard print. Vyse also wears a red wig and has an eye mask that says “fuck off” over her forehead.

Image six if of Lou Sanders by Idil Sukan. Sanders looks down her nose at the camera in a pose that is reminiscent of a posed studio portrait. She wears a white dress and sits on a white fluffy rug. There is also a pig in her lap which also looks at the camera.