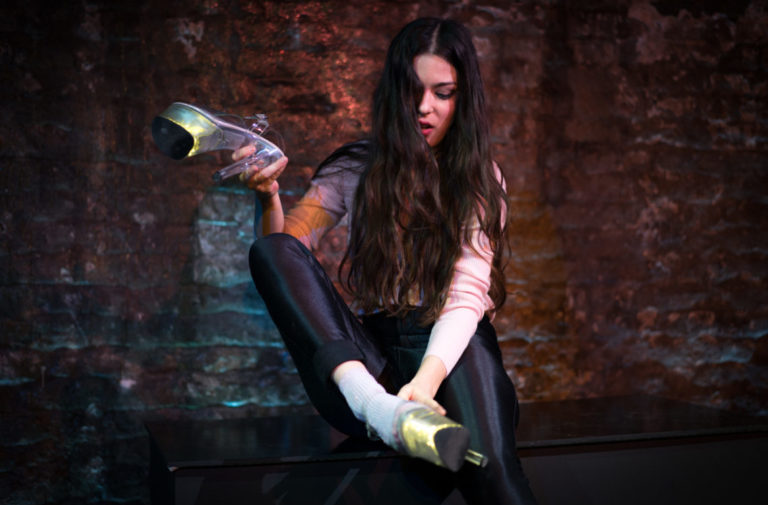 Lee Minora’s one-woman show is based around a spoof of a US talk show, hosted by the character of Becky Harlow. Minora covers all the bases of ‘white feminism’ – performative wokeness, insincere apologies and pussy hats – while warmly engaging with her audience. She asks us if we voted and then if we also instagrammed our votes before later asking sincerely if we feel glitter is a feminist trend this year or not, in order to satirise all the ‘Beckys’ out there whose feminism is anything but intersectional.

There is the odd reference to the US election system that I don’t quite get, but the concept of white women missing the point of feminism entirely is familiar on both sides of the Atlantic so there are a lot of knowing laughs among the audience.

Minora finishes with a section referencing Twitter ‘mobs’ and finally manages something remarkable: I start to feel sorry for this dreadful, selfish, ignorant woman because she’s only trying her best.

There’s a lot going on in Joana Nastari’s solo show made by strippers for strippers. It begins with a stage full of haze with the smell of incense in the air, before Nastari walks confidentially onto the stage in towering heels and a red suit to welcome us to the show.

Nastari next takes on the character of Bea, a lapdancer at a club, and her story takes up the majority of the show. We see Bea deal with ever-increasing fees just to be in the club, boring work and terrible customers, but also the camaraderie and kindness of her fellow performers. Bea is also avoiding voicemails and messages from her mother and sister; notification of these delivered to her by her seemingly sentinent phone via voiceover.

Before the show ends, we’ve also had poetry, a recording of (presumably) Nastari’s mother, a celebration of ancestral female power and a very sexy dance. Nastari gives a committed, defiant, vulnerable performance and, given that, it seems jarring that she shares her curtain call with Kitt Proudfoot, a DJ who has been providing the sound. It’s Nastari’s moment. Written and performed by Phoebe McIntosh, Dominoes is a one woman show about a teacher named Layla McKinnon. Shortly before marrying a man also called McKinnon, Layla is thrown into confusion about what she’s doing when she learns that her fiance’s Scottish ancestors may have owned her Jamaican ones.

McIntosh gives a fantastic performance and her writing is beautiful; she speaks about a difficult conversation including choosing words carefully “like deciding which wire to cut in a bomb”. She embodies the other characters in the play well: her best friend, her grandfather and her fiance. I think some lighting states may have gone a little awry in the performance I see, but in the earlier part of the show they set the scene well and there’s great use of music.

Dominoes interrogates historical inequality, the patriarchal nature of names and identity well, but I’m left wondering why it’s Layla who suffers the guilt, rather than her white husband-to-be. Surely that’s the wrong way around? Susan Morrison and Jojo Sutherland describe themselves as the grande dames of Scottish comedy. They perform without microphones and interact with the whole audience so at times this feels more like an hilarious conversation I’m having with my mates rather than a show. We are asked how we personally put on a bra (doing it up at the front and then moving it round vs doing it up at the back) and how long it’s acceptable to wait before washing them.

It goes to show how narrow the subject matter of most standup is that I think Fanny’s @ Five is the first time I have ever heard anyone make a menopause joke. Later, one of my friends describes it as a ‘niche’ subject, which it really isn’t. There just aren’t enough women, and enough older women, on our stages.

Fanny’s @ Five doesn’t contain any particularly sophisticated humour but I belly laugh a lot and feel that I’m in safe hands. And, I’m looking forward to finally hearing a few more menopause gags in other comics’ sets. Problem With Faye Treacy (Comedy)
Until 26 August, 19:45, Just the Tonic at The Mash House

Faye Treacy welcomes us into the space by involving us in a communal rendition of ‘The Lion Sleeps Tonight’, ably helped along by her trombone playing and use of a looping pedal. Once her set gets going she covers a lot of personal ground including growing up in Croydon, family breakups, her foster siblings and accidentally shitting herself on a date.

In some ways I find her more engaging when she’s dealing with the unexpected: she handles a group of drunk late arrivals really well and some later technical difficulties. When delivering her material, it feels simultaneously very rehearsed but also like she’s rushing through it. I suspect that the occasional word or linking sentence is being skipped which makes it a little difficult to follow (or perhaps that was just me.)

There is something unusual about her though, beyond the trombone playing. A little less nervousness and I would enjoy her even more.

The feature image is of Joana Nastari in F**k You Pay Me. She is sitting on a box in front of a brick wall, taking off (or putting on) a pair of very high sparkly shoes. She wears a long-sleeve pink top, wet look leggings and her long dark hair is hanging over her face.

Image two is of White Feminist by John C Hawthorne. It shows Lee Minora standing on stage as Becky Harlow. She wears a white dress with a cape and a blonde wig. She holds both hands in the air as if she is addressing the audience and looks jubilant. There is a pink background and a pink chair next to her.

Image three is of Phoebe McIntosh in Dominoes by Richard Budd. She looks as if she is addressing someone just off camera with her mouth open and her hands gesticulating. She wears a pink dress. She is only lit from one side and shadows fall across her face.

Image four is of Fanny’s @ Five. Susan Morrison and Jojo Sutherland stand next to each other in old fashioned housecoats and headscarves. They are both looking at a paper titled “Woman” and look towards each other as if they are not happy with what they see.

Image five is of Faye Treacy and courtesy of Steve Best. It is a head and shoulders shot of Treacy who looks directly at the camera with a slight smile. She wears a dark top, and her dark hair frames her face.