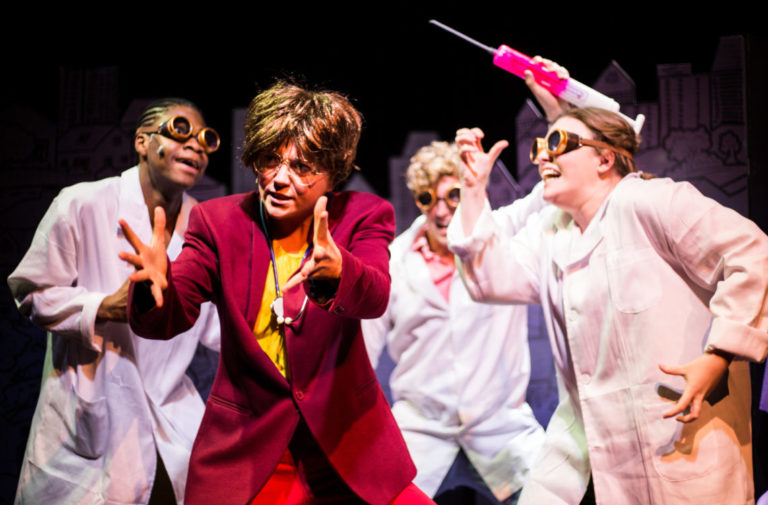 The F-Word is back at the Edinburgh Festival Fringe in 2018. We’ll be posting reviews all the way through the rest of the festival. To begin, here is the first set from F-Word comics editor, Emily Zinkin.

Vulvarine is a feminist comedy musical about a woman in High Wycombe who mysteriously gains superpowers. She teams up with her best friend to save women from the patriarchy and defeat her self-proclaimed arch-nemesis The Mansplainer.

This incredibly tight new musical is as silly and as brilliant as it sounds, with not a minute wasted in terms of plot, comedy or character development. The set and costume changes are quick; the jokes simultaneously very clever but not stepping over the line. I laugh my way through the entire hour and leave feeling like I can take on the world. Tessa Coates greets the audience by the door, inviting us all in and generally setting the tone for a lovely time to be had. While her set starts gently, she is brilliant at bringing it to a conclusion that has me quite emotional and wanting to hug her. Probably best known for the podcast Nobody Panic which she co-hosts with Stevie Martin, also at the Fringe, I was excited to see her live and was not disappointed.

Interweaving personal anecdotes and anthropology theories to try and look at how humans ended up as they are, Coates is full of fascinating facts and deeply relatable stories that have us laughing a lot. From murder plots to the pick-up artist school that is misguidedly placed in Oxford Circus (and misguided in general) Coates’ analysis of the way men and women behave and relate to one another is really interesting and manages to be humorous without undermining the seriousness of the topics she discusses.

Her analysis of Trump’s use of the words “witch hunt” and how often he uses them is very on point, and she maintains her relatability by the empathetic way she analyses the world and the concept of women as witches. I would highly recommend her show to everyone. In this one woman show the audience have to walk around a dead body surrounded by a pool of blood to reach their seats and I am on the edge of my seat from beginning to end of this performance. The show starts with the backlit entrance of the Maid, whose name is never given, and when the lights go on the screaming begins.

The Maid, played by Hannah McClean, talks to the audience about everything from terrible hotel guests to serial killers, and darkly dissects why women are more likely to get away with murder if they play the patriarchy at its own game. With only hints of her past and motives for the crime, she ricochets between glee, musing and frenetic fretting and we are left not truly understanding why she did it, but convinced she will get away with it. It is a very dark comedy and a fascinating topic to dwell on. This wickedly dark and clever cabaret shocks and delights; three friends attend the funeral of their favourite university professor, while debating which of them she favoured, the nature of death and funerals, and pot plants.

Lilly Pollard, Izabella Malewska and Tutku Barbaros portray three university friends who seem more curious about who got invited to the funeral than sad about the death of Cathy, their supposedly beloved mentor and professor. Using the funeral setting to explore cultural differences, society’s wealth divide and whether they’ll be food after, they play a range of characters who are all both funny and deliberately awful.

All of them have incredible singing voices, but Pollard’s low and dulcet tones really steal the show, while Malewska’s dancing is very impressive and Barbaros’ cutting comments on modern day racism are acerbic and timely. Ultimately, the show leaves me wondering how much we ever know the departed’s final wishes, and contemplating how we find it incredibly hard to think about death head on, so choose to think about other things instead because it’s easier. Bel Knight and Clare Hoey play two frustrated junior editorial assistants at a lifestyle magazine who dream of being big name writers. Awful female characters are a very refreshing part of a lot of the shows I see at the Fringe this year and It’s Not Cute Anymore is the show that probably demonstrates this concept the best. From insulting their supposed friends who constantly go on about their career success, to deciding to go out with them just to boast about their latest success, this show is a takedown of how social media makes it both easy to boast and easy to compare yourself.

The characters aren’t by any means evil, and they have no particularly dark past to speak of, so while their hijinks in pursuit of a book deal are truly terrible (from breaking into Marianne Faithful’s house, to faking an interview with her and pretending to be trans), they don’t have bad intentions beyond doing whatever they need to get what they want at any cost. This show in no way defends their actions either, but portrays them in a darkly comedic light to show the desperation of feeling like you should be more successful.

Taking a critical lens to female friendship and ambition, comparing yourself to others and how willing or unwilling people are to compromise, this show is more dark than funny, but it is cleverly ridiculous and definitely leaves me feeling like I’ve seen a modern cautionary tale.

The feature image is of Vulvarine by Fay Summerfield. It shows four performers singing and moving on stage. The figure in the front wears a maroon jacket and what looks like a brown wig and holds their hands up in front of them as if emphasising something. The other three wear goggles and white lab coats and are almost grimacing. One holds up a huge hypodermic needle.

Image two is of Tessa Coates. She is wearing all black and standing in front of a white wall. She turns towards the camera with a look of disgust on her face. She has long blonde hair hanging down her back.

Image three is from Ladykiller by The Other Richard. It shows performer Hannah McClean wearing a maid’s outfit and covered in blood sitting on a chair. Next to her is a dead body on the floor and a lamp. She looks serious and contemplative.

Image four is from Clingfilm. It shows the three performers standing in front of a white wall looking at the camera. They wear black dresses and brightly coloured jackets and look a little like they could be about to go on a night out.