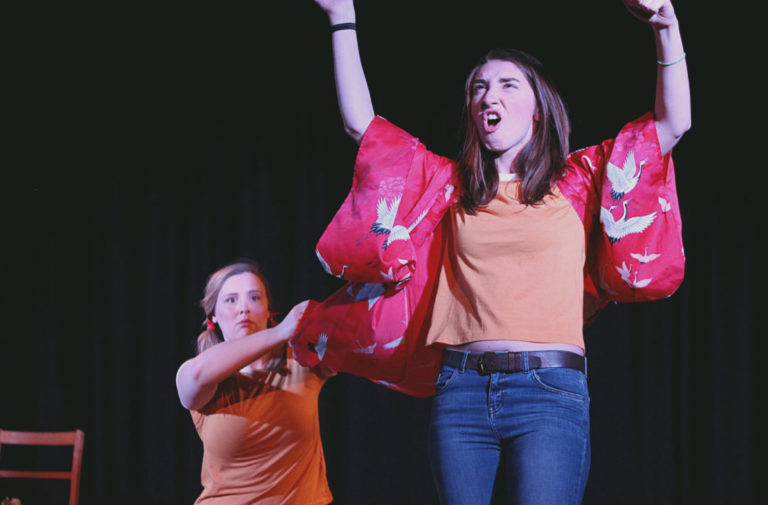 When Cassie wakes up on her 26th birthday, she doesn’t know what she did or whose front garden she passed out in; all she knows is her life is a mess. When I go to see Awakening I believe from the publicity image and show description that I’m going to see a comedy and I am very, very wrong.

Taking us through Cassie’s day, from looking for a pharmacy and cafe to finding her way home, Kirsty Osman (who both writes and stars in this show) masterfully interweaves Kirsty’s ‘morning after’ with details of her life. The use of props and sound effects is very clever, but ultimately the show leaves me cold and I would have appreciated a content note for the subject of rape.

For me the most heart-breaking part was Cassie calling herself ‘stupid’ and blaming herself: something many people experience when a terrible thing happens to them, and the usual societal story especially fed to women in this situation.

While it is well done I don’t think there is anything new in Awakening. However, it has left my male companion staring into the void for an hour so that’s only my opinion. I think what the experience has ultimately shown me is that while rape is always awful and shocking, women are forced to think about the realities of it all the time, from reading the news to going out at night, whereas many men are more separated from it.

Camp Be Yourself (Theatre)
Until 26 August, 13:40, Underbelly, Cowgate
Reviewed by Emily Zinkin

Set in a fictional week-long USA summer camp for drama kids, two previous campers now take the reins in “the best week of your life!” Emily and Betsy used to be best friends, but now Sharan is convinced she is the best thing to hit the acting scene since … ever, and Emily is so peppy she verges on franticness.

Camp Be Yourself flicks between private conversations in the staff cabin, performances with and from the kids, voicemails to God and urgent searches that don’t make sense until the end. I think everyone who was ever a drama kid themselves will connect with Camp Be Yourself, whether it’s Betsy’s desperate clinging to past glories or Emily’s slow confrontation of that behaviour.

While its slow racking up of the drama and inevitable confrontation between the two characters is very well done (and parts are incredibly funny) Camp Be Yourself tries to fit in too many locations and plot points and ends up being a bit confusing. I enjoy it however, and think it will be better when the many sound and lighting cues are more seamlessly interwoven into the performance. I think this show has bitten off a bit more than it can chew. Abigoliah Schamaun: Do You Know Who I Think I Am?! (Comedy)
Until 26 August, 21:00, Underbelly, Cowgate
Reviewed by Lissy Lovett

As Abigoliah Schamaun opens her show she tells us that this year she doesn’t have a theme; she’s just going to tell us about some funny things that happened to her this year. By the end, thinking about the links she’s made between her subjects and the arc that she’s taken us – the audience – on, it’s very clear that either this show hasn’t really been thrown together or, more likely, that Schamaun is such an expert at her craft that structuring an Edinburgh hour comes naturally to her.

Her set includes reflections on waxing, Trump and life in the UK. She has some excellent material on both confidence and the number on the weighing scale. There’s a long bit on ‘taboo’ words such as ‘retard’, which show that Schamaun absolutely does understand why this language is no longer acceptable, but she wants to use it anyway; after this, she says that she knows this section has made us uncomfortable and she’s quite right in my case at least.

This is an assured, funny hour from a performer who takes her job, if not always herself, seriously and I enjoy it a lot. Tom Neenan eviscerates men who claim to be feminists and then make it entirely about themselves in this one-man character comedy about a man whose girlfriend goes missing. Rather than go to the police he decides he’s best qualified to look for her and tries to work out who did it by interrogating her best friend and ex-boyfriend, but “don’t worry ladies, I’m one of the good guys.”

This show is pure character assassination of a certain type of man, from the character using his girlfriend’s disappearance to learn more about himself, to reading his terrible film script based on their first date. Neenan expertly weaves text messages, social media stalking and audience interaction into his amazingly ridiculous character’s hunt. The title is based on the last text his girlfriend sent him and when he discovers what it actually means, I am crying with laughter. It’s Always Infinity is painful to watch in the best possible way.

The feature image is of Camp Be Yourself from Box Theatre Company. It shows two performers on stage. One is standing on something, has both her arms in the air and looks like she might be shouting. The other performer stands behind her, holding out a kimono the that the front performer is wearing.

Image two is of Awakening. It shows a woman’s face looking up from grass where she is lying. She has makeup smudged around her eyes and lips and is wearing a party hat. She looks directly at the camera with a look of sadness or shock on her face.

Image three is a publicity shot of Abigoliah Schamaun. She has pink hair, a pink plaster on her cheek, wears a white dress and has tattoos. She stands in front of a blue background smoking a cigar.

Image four is of Tom Neenan. He is uncomfortably holding himself up on some railings at London’s south bank. He wears a grey zip-up hoody, black converse and spectacles. He looks into the middle distance.