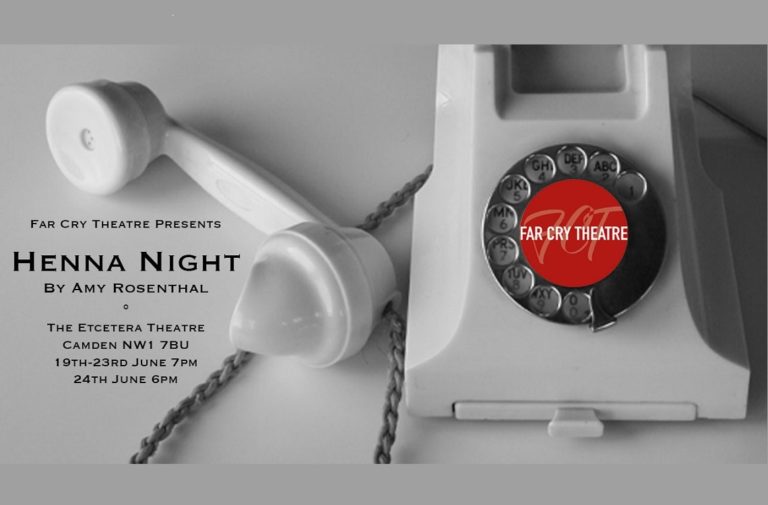 Henna Night by Amy Rosenthal is a 50-minute two-hander from Far Cry Theatre, a company consisting solely of women actors. Judith, played by Gabrielle Nellis-Pain, leaves a voicemail on her ex-partner Jack’s answering machine saying she’s been to Boots, she’s bought a packet of henna and some razorblades, and she’s either going to dye her hair or slit her wrists. Either way, she says, she’ll ruin her carpet. Oh, and she might be pregnant. It is Ros, Jack’s new girlfriend, played by Claire Lowrie, who hears the message and dashes to Judith’s messy apartment, not knowing what to expect.

The play opens with the audience hearing this voicemail, and then Ros appears on the steps in the auditorium ringing a buzzer to Judith’s apartment, calmly demanding to be allowed in. Judith’s front room is illuminated by the stage lights and we see her, hair coated in henna, angrily refusing.

The Etcetera Theatre is a small and inviting space above The Oxford Arms Pub in Camden, London. The cast use the theatre’s size to their advantage, creating a cosy atmosphere with dimmed lighting that makes the audience feel like they are inside Judith’s apartment.

The living room is strewn with cigarette packets, dirty pans, boxes, moving-in bags, sanitary towels, a blanket and food wrappers amongst other personal debris, and is rather reminiscent of Tracey Emin’s artwork ‘My Bed’. Emin has described her piece as a self-portrait of a time when she had a breakdown after a break-up and did not leave her bedroom for several days. Judith’s front room suggests that she is in the same sort of depressed state, which is made obvious by the voicemail she has just left her ex-boyfriend.

Both women start to argue heatedly and talk over each other, which makes their exchange extremely believable

Judith reluctantly buzzes Ros into her apartment building and darts about the living room, trying to tidy it before Ros reaches her floor. Her efforts are in vain though as Ros is visibly shocked when she enters. There’s an awkward silence at first as the two women look at each other and we see how different they are in appearance. Judith is wearing a slouchy, dingy, baggy tracksuit and Ros is well-dressed in a shirt and gilet, having come straight from her job at a school.

Nellis-Pain plays the nervous, fidgety Judith well, frantically pacing around the room, attempting to tidy and ignore the fact that Ros is there as the latter sits uncomfortably on the sofa. We then start to see the light humour that’s drizzled liberally throughout the play as Ros nonchalantly asks: “Can I ask you a question? Did you moisturise your forehead?”

It is amusing that their conversation opens with Ros giving Judith hair tips, despite the reasons why Ros has come over and the audience’s growing awareness that Judith has a strong dislike for her. The camaraderie doesn’t last long, with Judith reacting badly to everything Ros says next, shouting at her and accusing her of stealing Jack while Judith was still in a relationship with him.

Lowrie’s portrayal of Ros is convincing: she is calm and collected but the accusations from Judith when she feels she has done nothing wrong take their toll and she raises her voice. Both women start to argue heatedly and talk over each other, which makes their exchange extremely believable.

The actors work well together in this respect, constantly bouncing off each other and remaining consistently engaging. Credit must go to director Max Kirk here too, as the women own the stage as they move around it, swapping from sitting to standing when things get more heated, and it is easy to imagine an argument happening this way in real life.

Ros tells Judith that her relationship with Jack did not start until Judith’s was over, but Judith is defiant, saying women are not to be trusted and they have to watch each other. Ros tries to comfort her too, saying that Jack’s friends all prefer Judith and there are memories of her dotted all around their house. Yet Judith cannot bring herself to blame Jack for falling for another woman, and lashes out at Ros instead. Ros tells Judith that men always seem to get away with it, and the new woman is always blamed.

However, as the performance goes on the audience soon realises that Judith and Ros’ encounter isn’t really a portrayal of two women fighting over the same man; he fades into the background as we see a sense of sisterhood emerge and we witness the blossoming of a female relationship that, under different circumstances, could have resulted in friendship. Conversation keeps going back to the henna in Judith’s hair, and Ros reads from the henna box leaflet, saying it has been used for over 5000 years, sometimes to bring solace and overcome grief, practised on women by other women and typically applied by a woman who has found happiness.

It is fitting then, that Ros who has found happiness in a new relationship washes the dye out of Judith’s hair. Due to a lack of hot running water Judith reluctantly brings the washing up bowl and kettle from the kitchen into the living room. Ros turns on the CD player, and a well-chosen 1990s song by The Cranberries, with the lyrics “Do you have to let it linger?” starts playing. As they settle down to wash out the dye, the duo are silent and we see Judith become overwhelmed with emotion, her teary eyes conveying all the words that she doesn’t need to say. It’s a moving few minutes.

As the two women leave the stage to try to get to the bathroom without spilling water everywhere, we can hear them both giggling and in that moment we know Judith is going to be all right. It’s remarkable to see two characters develop so fully in such a short time, and although Judith has said they can’t be best friends, it’s uplifting to see these two women come together in spite of their differences, if only for the time it takes for a henna application.

The feature image is the poster for the show. It shows a white old-fashioned telephone with a handset attached to a base with cord. The base has a dial with numbers in a circle. In the centre of the dial a red circle is superimposed with the words: “FAR CRY THEATRE”. On the left of the image are the details of the show.

Image two is a head and shoulders shot of two women, both with their heads turned slightly to the right. The figure on the left looks away from the camera and has a towel around her head. The figure on the right leans on the other’s shoulder and looks towards the camera. Both are smiling and wearing black tops. They look to be outside.