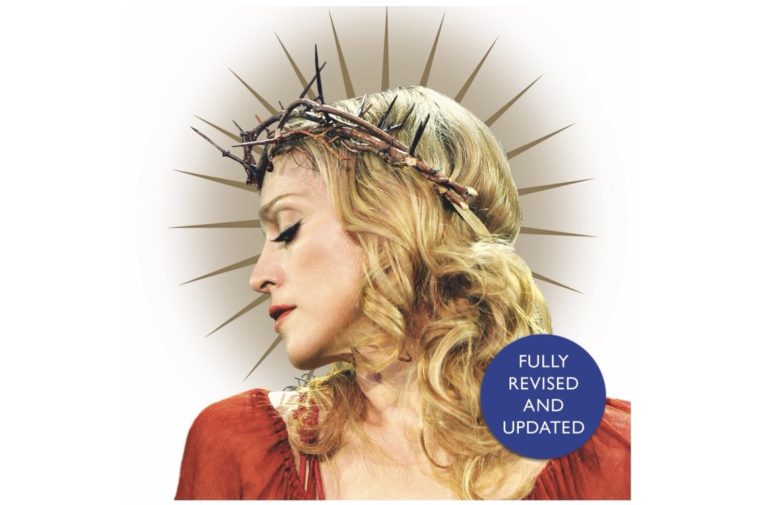 To mark Madonna’s 60th birthday on 16 August, 2018, Corgi have published a new edition of Lucy O’Brien’s biography of the musician, Like an Icon. O’Brien is a well-respected broadcaster, writer and academic who currently leads the Music Journalism and Music Marketing courses at the University for the Creative Arts in London. The first edition of Like an Icon was published in 2007, and since then, Madonna has released three albums as well as touring extensively, providing plenty of additional material for the new edition of the book.

O’Brien says in her introduction:

When my book was first published in 2007 Madonna was still defined by her sex life, her fashion status and her feel-good disco tunes. Many found it hard to believe she was a credible musician and artist. Now in the year that Madonna turns sixty, the world is beginning to understand her achievement and there is a desire to explore how she did what she did.

Madonna is the biggest-selling female recording artist in the world and holds the record for the top-grossing concert tour by a female artist. O’Brien acknowledges that Madonna is an “imperfect icon” but writes that this element of human error makes her more believable and gives her more humility while retaining her undoubted iconic status. A status which O’Brien believes she deserves not just for her outstanding musical achievements, but also for her consistently reinvented image and her undying commitment to inclusivity.

Madonna’s speech when she was given Billboard’s Woman of the Year award in 2016 shows her dedication to fighting sexism, ageism and prejudice. She thanked Billboard Awards for: “…acknowledging my ability to continue my career for 34 years in the face of blatant sexism and misogyny and constant bullying and relentless abuse”. She goes on to suggest that the most controversial move of her career has been “to stick around”. O’Brien notes that the speech occurred a year before Tarana Burke’s #MeToo campaign gathered pace following the accusations against Harvey Weinstein, demonstrating Madonna’s continuing relevance.

O’Brien’s volume is divided into four books: ‘Baptism’, ‘Confession’, ‘Absolution’ and ‘Redemption’. Madonna rebelled against her Catholic upbringing later in her career, but it is a fitting way to structure her biography considering the use of Catholic iconography that Madonna has used throughout her career. The cover image shows Madonna wearing a crown of thorns, which, according to Christianity, Jesus wore in the events leading up to his crucifixion and also surrounded by a halo.

The first chapter of Madonna: Like an Icon focuses on her upbringing and her mother, Madonna Sr’s, fatal breast cancer when Madonna was only five years old. Madonna Sr was a devout Catholic and mothered a large family of which Madonna is the eldest daughter. She has fought with her brothers throughout her life, as Life with My Sister, Madonna by Christopher Ciccone reveals. These rivalries and the early death of her mother, meant that Madonna developed dependence on her father.

O’Brien references psychologists here, as well as studies related to teenage development and the roles parents play, which makes for interesting reading. John Bowlby, a groundbreaking psychologist, explains that the most frightening characteristic of a dead person is their immobility, therefore it’s only natural that Madonna was afraid of keeping still. Her mother’s early death had a strong influence on Madonna’s lasting obsession with health and fitness; she is well known for her rigorous exercise regime and her strict macrobiotic, mostly vegan diet.

Christopher Flynn, her dance teacher, introduced her to the mid-1970s gay nightlife of Detroit, which was a pivotal point in her life and a huge influence later on her music. In the book, she describes this transformation in her early life:

I kept seeing myself through macho heterosexual eyes. Because I was a really aggressive woman, guys thought of me as a really strange girl. I know I frightened them. I didn’t add up for them. They didn’t want to ask me out. I felt inadequate. And suddenly when I went to the gay club, I didn’t feel that way anymore. I just felt at home. I had a whole new sense of myself.

Book II, ‘Confession’, sees Madonna begin to rise to fame. O’Brien describes her working relationship with Nile Rogers. Interestingly, Rogers wasn’t a fan of the 1984 hit ‘Like a Virgin’ and wanted to remove it from her album, but Madonna ferociously fought for it to be a single. She was starting to really take control of her own music and developing her identity as an artist.

Running parallel to her work as a recording artist has been Madonna’s much less successful film career, which O’Brien discusses throughout the book. Although her film career isn’t so fruitful, it does contribute to Madonna’s successes on MTV. Her drama and dance background, and her interest in fashion, makes her a very visual artist, and MTV, which was launched in 1981 and came of age alongside Madonna’s career, enabled her to explore and show this part of herself alongside her music.

I enjoy reading about the controversy around In Bed with Madonna and Madonna’s Sex book.

In 1984, at the first MTV award ceremony, Madonna performed a highly stylised sexual version of ‘Like a Virgin’. It was considered a risky and shocking move, and was at first rejected by feminists.

As O’Brien puts it, in the age of MTV:

Things changed in 1985, following her strong performance in the film Desperately Seeking Susan. After the film’s release, Madonna featured on the cover of feminist magazine Women’s Review with the headline: “How I stopped worrying and learned to love Madonna”.

The broad theme of Susan Seidelman’s film is to challenge the stereotypes and conventions that come with being a woman, and finding freedom in the city. As such Madonna found it no stretch to identify with her independent, rebellious character, Susan. The film also successfully captures the underground bohemian/new wave scene of the 1980s which gave Madonna her first big break in the music industry.

Every one of Madonna’s scandals and publicity stunts are accounted for in Like an Icon. I enjoy reading about the controversy around the deeply personal documentary of her 1990 Blonde Ambition Tour, In Bed with Madonna, and Madonna’s Sex book. Madonna is quoted as saying: “Sex was my fantasy and I made money off of it. That is a no-no … it’s all part of a strong woman in control terrifying people.” She purposefully set out to change her audience’s attitudes about women and sexuality by constantly pushing these socially constructed boundaries.

Some chapters begin with an italicised paragraph, which tells the reader a little about Lucy O’Brien, and her own life at the time of each Madonna album or tour. This personal, autobiographic text could become self-indulgent, but instead it is concise and intriguing. You don’t often get to know the writer of a biography, and I like learning why O’Brien has chosen to dedicate so much time to writing this volume of work. For example, when discussing the birth of Madonna’s daughter, Lola, O’Brien reflects on her own memories of holding her own daughter for the first time.

Book III tells the story of Madonna and motherhood. O’Brien’s interviews indicate that Madonna became calmer with parenthood – motherhood had transformed her somewhat. “I was incredibly thoughtful and retrospective and intrigued by the mystical aspects of life” she says.

I’m interested in how motherhood affects female pop stars’ careers so I’m pleased that O’Brien explores Madonna’s experiences in so much depth. She explains how touring becomes a summer activity for Madonna so that she and Guy Ritchie can take their two young children with them.

As a songwriter myself, I also enjoy reading how Madonna’s songwriting and production process changed, and I find interviews with her collaborators particularly interesting. She worked closely with Rick Nowels, for example, who praises her lyric writing and her understanding of song form, and discusses how they structured their writing sessions around childcare commitments.

The new book, ‘Redemption’, explores Madonna’s life since the first edition of Like an Icon in 2007. Since then Madonna has released three albums, Hard Candy, MDNA and Rebel Heart, as well as touring extensively. Her work with younger artists and producers, like Timbaland, Justin Timberlake, Nicki Minaj and MIA, showcase Madonna’s vitality and energy. Despite media leaks, her latest album, Rebel Heart received a positive reaction with solid four and five star reviews from critics proving her continuing relevance.

O’Brien’s Epilogue compares Madonna to her idol, Martha Graham, and discusses her commitment to LGBTQI+ rights and women’s rights.

The Times describes Like an Icon as a “mighty volume” and I’m inclined to agree. My only disappointment with this biography is that there is so little of Madonna’s own voice. However, O’Brien overcomes this and captures Madonna’s music within the context of her personal life and her cultural and political landscape by extensive interviews with those who are (or were) close to her. No stone is left unturned in this comprehensive guide to one of the greatest pop icons of our time. I have no doubt that this edition will soon be outdated as Madonna continues to carve her impressive career into her 60s.

Image is the cover image for Lucy O’Brien’s book Madonna: Like An Icon. It is a head and shoulders image of Madonna. Her hair is long, blonde and in waves. She is looking away from the camera, to her left, has her eyes closed, is wearing a red dress or top and a crown of thorns.