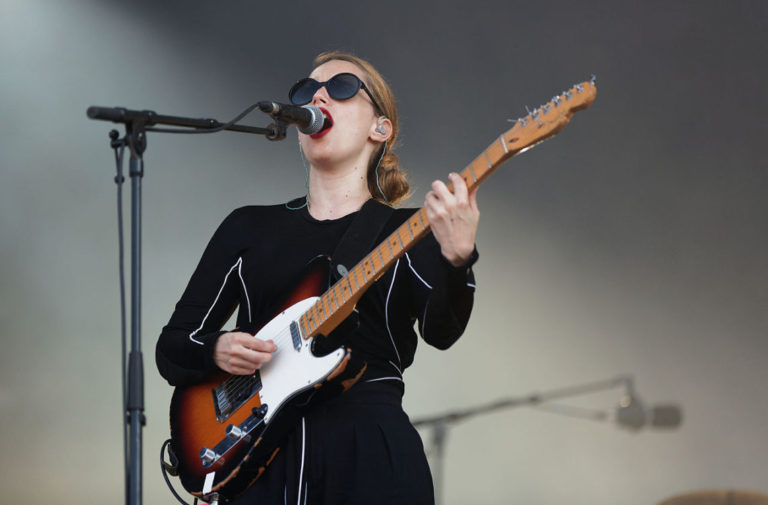 “Growing older as a woman is an act of defiance” “Do you ever experience imposter syndrome?”

Anyone following Anna Calvi’s progress over the past eight years or so might consider this a highly impertinent question to ask an artist of her calibre. Professionally speaking, Calvi is in a venerable position. Having released her third album Hunter to near-universal critical acclaim in September, she’s currently undertaking the continental leg of a substantial European tour that ends with a single London gig in early February. This follows a series of shows she’s performed around the UK over the past month that have attracted adulation and new admirers in equal measure. Singles from the album have been on heavy rotation on BBC 6 Music and the column inches are stacking up.

And, personally? Well, on this, her first album since 2013’s One Breath, the hallmarks of her artistry – haunting vocals and virtuoso guitar playing – are all present and correct. But, something seems different.

In her lyrics and vocals, there seems to be a freedom and confidence that characterise Calvi’s work in a new and exciting way. While she has been quietly referencing feminism and queerness for a number of years now – both implicitly and explicitly – this latest incarnation seems more like an explosion.

Covering themes of power and gender, Calvi is part of a vanguard of artists, such as Janelle Monáe, SOPHIE and Christine and the Queens who are performing and talking openly about their queerness. The film accompanying ‘Hunter’ the single shows two apparently queer people pleasuring themselves. It’s 2018, yet these are representations of people we rarely see in the mainstream media and it’s gloriously radical.

I spoke with Calvi by telephone last week and asked her where this freedom to take more risks came from. “I guess I just wanted to really make an album that sounded strong and raw and passionate,” she said.

“The themes on that album are themes that I feel really passionate about and I wanted that to be present in the music as much as it was in the lyrics and everything about it.”

Having described Hunter as a feminist album, Calvi recently said: “Our culture is so saturated with ideas of women being hunted by men. I wanted to give a new narrative of the woman as a hunter who goes out and takes whatever she wants. I wanted my voice to be this wild force because often as a woman you’re told to be nice and quiet and smile.”

In terms of a feminist awakening, Calvi previously shared the anecdote of hearing Noel Gallagher pronounce that women couldn’t play guitar, after she had duly learned all the chords to his songs as a teenager. Has she always identified as a feminist?

“When I was younger, I wasn’t familiar with that word, but I do remember not understanding why men got so many privileges that women didn’t and feeling frustrated by it,” she tells me. “It wasn’t actually until my first album when I was constantly being asked if I was a feminist and not really understanding, that I educated myself in it and realised that this is what I’ve been my whole life. I just didn’t have the words to describe it.” Calvi is 38-years-old – far from ‘old’ by normal standards, but not the typical twenty-something that tends to predominate in the world of entertainment. I was keen to discover whether her experiences of growing older in a patriarchal culture that fetishises youth had influenced her work.

“I feel that growing older as a woman is, in a way, an act of defiance,” she says. “I refuse to let this society make me feel that my worth was at its greatest when I was 19-years-old, before I knew or experienced anything. I’m not going to allow it to make me feel, as I get older, that I somehow have less to give the world,” she says.

Gender is also a subject close to Calvi’s heart and a strong theme throughout her music. This ranges from the traditionally male flamenco outfit she used to wear during live performances, to the content of her lyrics, her first single from the album ‘Don’t Beat the Girl out of My Boy’ being a prime example. Calvi has also spoken about wanting to be a boy as a child and criticised the gender binary as being restrictive and stifling.

“I felt most confused about my gender when I was a kid”, she reveals. “And then as I got older, I kind of accepted and worked around the gender that I had been given.

“When I started being a solo artist, I felt that music was a way for me to get rid of all those limitations and allow any sort of masculinity or whatever – energy – to come out in the music and how I was dressing.”

Influences or guidance in this area, however, have been limited, she tells me. “I think it’s been more of a solitary exploration for me. I haven’t really had anyone, unfortunately, to inspire me, particularly, when I was growing up, although I do remember listening to Patti Smith’s Horses and how she presents herself on that cover and how she talks about sexuality on that record. It felt like ‘finally’ – a more realistic depiction of a woman expressing her sexuality – and that meant a lot to me.”

Calvi has previously said that she wanted Hunter to provoke an emotional and visceral response in listeners. What evokes this feeling in Calvi?

“Lots of different things. Perfume Genius is someone who really affects me emotionally, especially his album Too Bright – I find that really galvanising and visceral. I find Suicide, the band, has that effect on me – they’re a band who I’ve taken a lot of inspiration from. Even though we sound incredibly different, I love the idea of having a single idea that you’re going to keep going with, and you’re not going to stop until you get it. And, the simplicity of it is actually the strength. Just repeating one word can mean more than saying lots of things. So, I find that ethos really inspiring.”

And, as for the imposter syndrome? Calvi acknowledges that this is a feeling many artists can relate to. “You can go from overconfidence to extreme doubt. It’s like a seesaw that you’re on, from one to the other,” she says.

“You kind of need both – you need the confidence to be brave and try things, but you do need the feeling of questioning everything you’re doing, is it actually shit – because that’s how you get better. On the days where I’m like, ‘Oh, my god – I’m really not doing this very well’, I get a day of feeling really miserable about it, then I’m just convinced that I have to do better. So, I think that both of them are really important and if you only have one, then you can’t really succeed in being an artist.”

Sound advice indeed, from one of the UK’s most thoughtful and compelling artists.

Hunter is out now on Domino records

The featured image shows Anna Calvi on stage wearing sunglasses playing a guitar and is used under the creative commons licence.

The image shown at the top of the page is an upper-body shot of Anna Calvi. Her head is in profile and her dark-brown shoulder-length hair is damp and tousled, covering half her face, which is also damp with what appears to be sweat. She poses in front of a red background, looking defiant, and wears a red sheer top. Picture by Maisie Cousins.

The second image is an upper-body shot of Anna Calvi. She wears what appears to be a black and red male flamenco dancer’s coat, which is open. On the top of her chest, there are words written in black ink that have been smudged. Her face turns away from the camera and and her dark-brown shoulder-length hair appears damp and tousled. She wears heavy black eye make-up. Picture by Maisie Cousins.