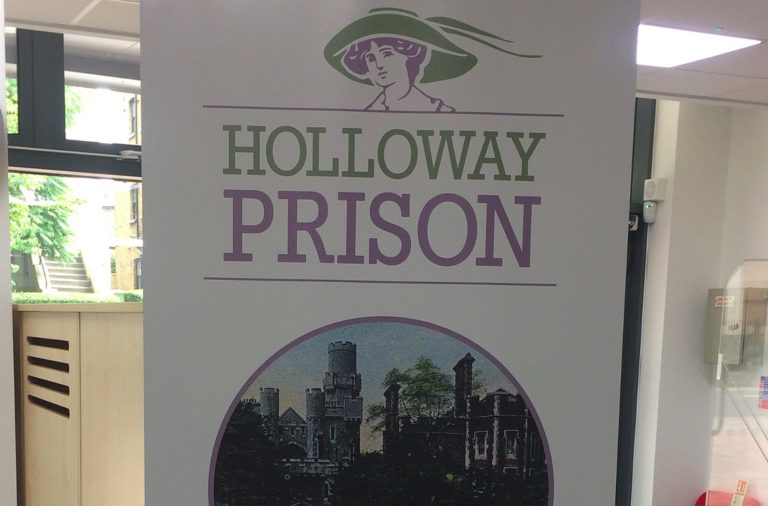 “For all your horror, you were home”: Hannah Hull’s sonic exploration of Holloway Prison

Hannah Hull’s practice-based research aims to tackle social change and concentrates on at-risk and socially excluded groups such as addicts and the homeless. This project, Burning Salt, is an album which was inspired by the stories and oral histories of Holloway prison’s archives. It is a result of her residency at Islington Heritage’s Echoes of Holloway Prison project.

The notorious London prison was home to many historical inmates including the revered suffragettes, Emily Davidson and Emmeline Pankhurst, who famously went on hunger strike. The infamous Moors Murderer, Myra Hindley, who, along with Ian Brady, brutally abused and murdered children in the 1960s was also an inmate.

While certainly not easy listening, the debut Burning Salt EP, Dirt, exposes beauty and misery in equal measure within Islington Museum’s archive of accounts of prisoners, staff and visitors.

The opening track, ‘Anon’, explores the cycle of abuse and crime. The lyric “…everybody wants to give back what they take” enforces this message. The instrumentation is dark and moody with only a double bass, piano and an ominous, atmospheric synth supporting the hauntingly deep voice of Hull. This raw, simple and minimal instrumentation reflects the plain, cold walls and the repetitive routine of the prison.

‘Born Again’ features the words of one of the women’s stories. Although abstracted and anonymous, this song feels deeply personal, and captures the strong will for survival that becomes a theme of the album.

Love and loss are also strong themes that resonate throughout the EP. Hull says this was “…probably the most surprising theme found within the oral history transcripts: love”.

Poorer inmates were paid to clean up after dirty protests

For me, this song is a great success – the repetitive guitar motif builds a great deal of tension and echoes the mundane repetition of prison life. This is contrasted by the distorted electric guitar which offers a sense of release, and evokes the hope for escape and freedom.

The following track, ‘Ginnie’, is based on an account of a Greenham Common protester. It is almost uplifting and there is a strong sense of togetherness and supportiveness among the protesters. Hull tells the story with an affectionate lightness and she focuses on the small details such as the bad coffee and using the water in the courtroom to bathe. Hull has recently released a video for this track which features her band playing in a windowless prison cell with candles perhaps representing the lives of the many women who lived there.

Title track ‘Dirt’ exposes both the class strata that exists even in prisons, and the impact of capitalism on those incarcerated: Poorer inmates were paid to clean up after dirty protests. The lyric “I’m not not one of you because I’ve done things you would never do” has really stuck with me. It’s deeply moving and tear jerking, and echoes the feelings of exclusion, degradation and inferiority experienced by inmates.

The mental welfare of prisoners is tackled by Hull in the track ‘F2052SH’. This is the name of the form used in prisons to report self-harm and suicide. Hull was inspired by the account of a mental health nurse in Holloway who was trying to improve the care of inmates. Her vocal is particularly strong here, and nods to PJ Harvey.

The final song isn’t based on any particular account, but is instead a love letter to Holloway Prison. “For all your horror, you were home,” Hull sings, recalling the many lives, loves and losses that were experienced within the walls of the prison.

The announcement to close the prison in 2016 was controversial with plans to build high end housing in its place and relocate prisoners further from their families. As 84% of crimes committed by women in the UK are nonviolent, there was outcry for better rehabilitation programmes and affordable housing in the area. The local community feared that high end development would increase homelessness and crime. The prison remains vacant and I hope that projects such as Burning Salt help to raise awareness of the effects of prison closures, and the need for more investment in rehabilitation programmes through creating poitical but accessible art. Despite the somber history of the Victorian Holloway Prison, and the negligent treatment of inmates, Hull finds compassion and mercy within these women’s accounts which just goes to show that love can be found in even the darkest places.

Image one is of Holloway Prison, London. It was taken in 2008, before the prison’s closure. It is taken from a slight distance and is by Matt S. It is being deployed according to a flickr creative commons licence.

Image two is of a banner from the newly opened Cat and Mouse library in Islington, London. The library is located in the same area of London as the former Holloway Prison, where many suffragettes were imprisoned. The banner explains the suffragette origins of the library’s name. The photo is by the Libraries Taskforce and is used according to a flickr creative commons licence.