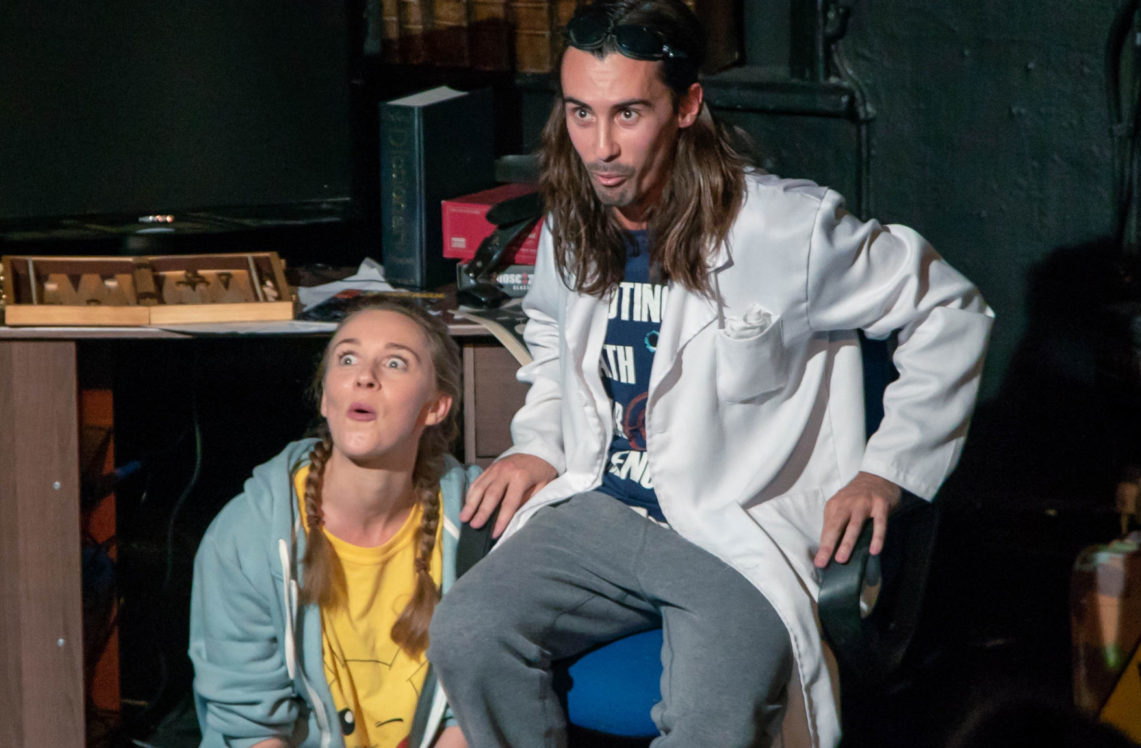 When I first heard about The Bride of Wankenstein, a comedy about toxic masculinity in the internet age written by a cis-het man, I was sceptical. Writing about sexism from the point of view of a man is no mean feat. But Oliver Myers’ playwriting debut, with three women at the helm (director Nadia Papachronopoulou, producer Amii Griffith and production designer Rachel Mathewson), which I see earlier this autumn, pulls it off.

Tucked away in the upstairs of the Hen & Chickens Pub on Highbury Corner in London, the intimate space lends itself to the den-like feeling of William’s flat, and for the three-person cast, it is ample. Books, video game paraphernalia and energy drinks cover the stage, with a large fridge (which doubles up as the projector screen that displays lead character William’s video log) its focal point.

Science genius and 30-year-old virgin William Wankenstein, played by Harry Farmer, feels rejected by society, particularly by women. So, he creates – in his words – “the perfect woman” named by him as Pandora and played by Lucinda Davidson. How he creates her is a question left mostly unanswered, though we do know that she is made entirely of “organic matter”, and so eco-friendly. As the play’s tagline goes: “all William must do is bring her to life and teach her to love him. What could possibly go wrong?”

William is a stereotypical ‘incel’ (involuntary celibate). We learn early on that he is a virgin, which he refers to as his “involuntary condition”. His unhappiness at still being a virgin is made clear on a number of occasions, particularly after a 12-year-old boy, Ernest, who is beating him at his favourite video game, Shooting-Death-Violence 5, uses the word as an insult and enrages William.

In spite of Pandora’s intelligence, which William frequently references, she is blissfully unaware of social norms. It is Pandora’s intellect coupled with the innocence of her years (or months) that shine a light on the absurdity of such ideas, such as the concept of being ‘ladylike’; Pandora, unaware of notions of politeness, burps loudly, to William’s disgust

William lives alone and spends his free time playing Shooting-Death-Violence 5 (we later learn that he is unwilling to tear himself away from it), alluding to two traits with which incels are associated: singlemindedness and an obsession with violence. Indeed, although the incel subculture was borne out of one woman’s quest to create a community for people to talk about not being able to find a romantic partner, it has become a culture of mostly straight white men who feel resentful towards women for not having sex with them. And, unfortunately, inceldom is not just a harmless online community; several mass murders in the United States in recent years have been committed by men who were to some extent involved in inceldom.

William teaches Pandora to read and write, though he controls the content. He comments in his video log that he feels more like her father than anything romantic or sexual: an ironic symbol of his status in their relationship as a patriarch.

In spite of Pandora’s intelligence, which William frequently references, she is blissfully unaware of social norms. It is Pandora’s intellect coupled with the innocence of her years (or months) that shine a light on the absurdity of such ideas, such as the concept of being ‘ladylike’; Pandora, unaware of notions of politeness, burps loudly, to William’s disgust. She then points out the paradox of him having created her to burp and then reprimanding her for doing so.

One particularly funny scene depicts William and Pandora as they try to have sex. Pandora willingly agrees to have sex with William but she barely knows what sex is. Her blissful ignorance again creates a comically awkward moment that’s presumably far from the steamy picture William had in mind. William explains that they have to rub up against each other, so he wraps his arms around her and they stand there clumsily. Pandora asks: “Is this it? Is this sex?” William tells Pandora that they need to be naked and to use their “things”, explaining that his is supposed to go “rigid” and hers is supposed to “slacken”, to which Pandora replies: “It doesn’t feel like mine is slackening,” to a rapture of laughter from the audience.

William is beginning to lose hope in losing his virginity to Pandora when he receives a food delivery from an attractive young woman, Beth, played by Mica Williams, that he did not order (a prank from Ernest). Beth finds William a little strange, but in an endearing way, and they share a love of Shooting-Death-Violence 5 and cosplay, so she expresses an interest in being friends. For the attention-starved William, this must mean she fancies him, but when she casually mentions that she has a partner, William becomes angry, believing her to have led him on. Will Pandora and Beth work out how creepy William really is?

With excellent performances from Farmer, Davidson and Williams, The Bride of Wankenstein is extremely enjoyable. Davidson, in particular, is a joy to watch. She plays the wide-eyed, innocent but razor-sharp Pandora with ease, comedically prancing about like a dinosaur and regurgitating dictionary definitions. Overall, The Bride of Wankenstein is an intentionally hyperbolic insight into the absurd and dangerous world of inceldom. Though it plays out ‘IRL’, its roots in internet culture are clear. It is an incel’s dream-turned-nightmare.

Production company Rocket Surgery UK are planning to bring The Bride of Wankenstein back to the stage in the new year.

Image courtesy of Rocket Surgery Productions. It shows lead characters William and Pandora looking excitedly into the distance. William is sat on a chair wearing a lab coat and swimming goggles on his head, and Pandora is sat on the floor.