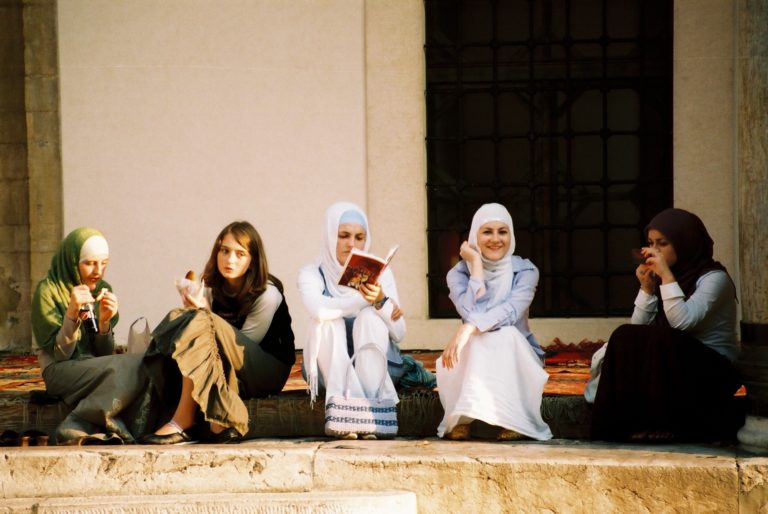 Why is Blac Chyna promoting a skin-lightening cream? (The Pool)

The Lasting Effects of the Lolita Complex (Longreads)

From the article: “In Swain’s screen test, her eyes gleam when she cracks a joke at Jeremy Irons’ expense. “I’m a murderous pervert,” she says, mimicking Irons. She laughs and rolls her eyes, readying herself for applause. Lyne gives it to her: a big belly laugh off-camera. Lyne’s playboy hair, coupled with his English accent, turn him into everyone’s uncle who knows no boundaries. He is both flirty, and fatherly. Then, on the second take, Irons slaps Swain across the face. He doesn’t hesitate. It’s shocking to see. Effective. When it’s over, Lyne goes in a for hug. With his arms around her, he whispers praise. Swain says she’s fine. She’s a professional after all.”

The role of women in mosque is finally changing. Here’s why that matters (Stylist)

From the article: “Like her animated predecessor, Stanley’s Kim Possible is a self-assured redhead who wears a black top, green khakis, a waist pack, and flat boots. But some adult male critics immediately laid into both Stanley’s appearance and her more modest costume, unfavourably comparing her to  the midriff-baring, hourglass-shaped cartoon teen. Not only does sexiness belie the point of either character’s purpose, but the expectation is a symptom of a larger question pervading pop culture and American society in general: What should teenage girls look like, and how should they be treated by older men?”

From the article: “By 2019, the festivals will have hosted one, ONE, female headliner in 20 years, which was Paramore in 2014 in a co-headline slot with Queens of the Stone Age.

Reading and Leeds aren’t standing still: they’re moving backwards. And if they continue to stubbornly, wilfully ignore repeated calls for them to better reflect the industry and times we live in, they will continue to find themselves on the wrong side of history.”

From the article: “The show’s uniformly tall and thin models seem an anachronism in a world that increasingly celebrates body diversity.”

Shon Faye On Changing The Conversation Around Trans Rights (Vogue)

International Day for the Elimination of Violence against Women: 25 November (UN)

From the article: “A parliamentary meeting heard last night (Wednesday) how disabled people working in the education sector have been confronted by employers that are failing to provide them with accessible lecture and teaching spaces, denying them the right to disability leave – for disability-related absence from work – and delaying the provision of the reasonable adjustments they need and are entitled to under the Equality Act…”

A reading list for men who care about feminism (Leah Fessler, Quartz)

From the article: “I often fantasize of a world in which male friends casually chat about bell hooks or Audre Lorde, as my female friends and I do. That fantasy recently became reality, when I met Wade Davis, the former NFL player turned feminist activist who is on a mission to teach men about gender equality and healthy masculinity…”

My contraceptive pill and me (Edwina Langley, BBC)

From the article: “…A recent survey by website The Femedic, found almost 50% of 1,000 women in the UK had experienced ‘serious trouble’ with hormonal contraceptives. The same research found ‘just one in four women believe the potential side effects of their chosen form of contraception are explained to them in depth’.

From the article: “It’s easy to dismiss this sort of thing as irrelevant – to say that a few disabled people on a dancing competition can’t make a difference. But it’s no coincidence that the critics who say representation doesn’t matter are generally people who are used to seeing themselves always represented. For those who are routinely excluded from popular culture, such as ethnic minorities and women, visible representation can be vital; something that’s particularly precious when you’re growing up and working out your identity and place in the world.”

The image is used under a creative commons license with thanks to Kashfi Halford. It shows five people sitting on a step in the sunshine. Four out of the five are wearing headscarves (or hijab). They are all engrossed in a variety of activities including applying make-up, smiling at the camera, reading a book and eating what appears to be bread.