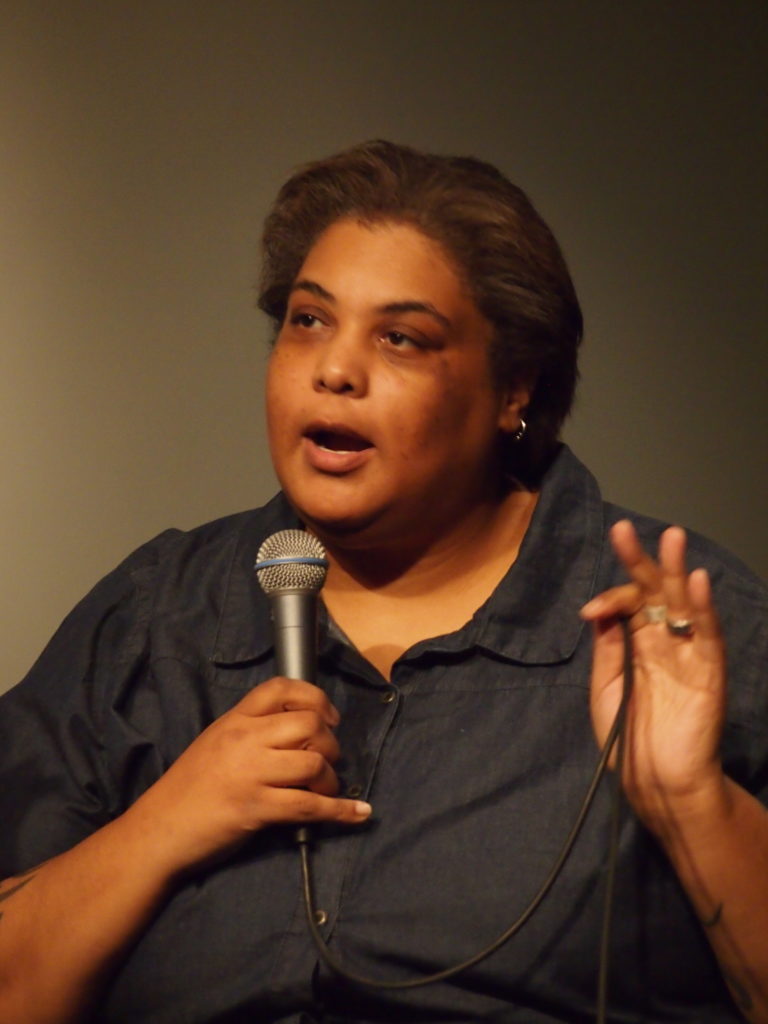 In December I had the pleasure of listening to Roxane Gay in conversation with Liv Little, founder of gal-dem magazine, in a sold-out Royal Festival Hall in London. It was Gay’s first time in the UK, due in part to the fact that, until recently, she had been anxious to fly for fear of not fitting in the aeroplane seats. In January of last year she underwent weight loss surgery, which was life changing, she says. However, she rightfully argues that the way in which people deemed obese are actively encouraged to have this surgery is a damning indictment of the lengths to which society drives fat people in order to be deemed acceptable. Indeed, choosing to go through with the surgery means accepting the trade off of irreversible changes to one’s anatomy and permanent malnutrition unless supplements are taken.

Gay’s relationship with her body is the focus of her most recent book, Hunger, published in 2017. Gay says that her body was the last thing she wanted to write about, but that this was why it had to be the subject of her next project. Hunger is not your typical weight loss book. It is not a success story with a picture of her on the cover standing in one leg of an old pair of trousers, she jokes. It is a memoir in which Gay traces the origin of her weight gain back to the rape she experienced at the age of 12. This sexual trauma made her want to make herself physically bigger. If she was big, she hoped that men would leave her alone. She found, however, that her size made no difference when it came to unwanted male attention.

The pictures of bikini-clad bodies we see with #bodyposi on Instagram still tend to feature slim women, which detracts from the real focus of the movement which has its roots in fat acceptance

Hunger is also about what it is like to live in in a body that is demonised by society. “Just to be in a body in this world is difficult”, says Gay, noting that when thin women come up to her to express how much they related to the book her gut reaction is one of irritation at the fact that they do not really understand what it is like to be “super morbidly obese”. Such honesty is refreshing because although society is more condemning the fatter you are, I cannot think of any woman I know who has been untouched by patriarchy’s policing of our bodies. Nonetheless, it is important for slim women to be mindful of their privilege, such as their ability to go into a shop on the high street and find clothes that fit, or to not have to think twice about booking a holiday for fear of not being able to fit in an aeroplane seat.

Gay says that efforts for body positivity tend to be more rhetorical than substantive. The pictures of bikini-clad bodies we see with #bodyposi on Instagram still tend to feature slim women, which detracts from the real focus of the movement, which has its roots in fat acceptance. Hashtags are useful, Gay says, but until we change systemic issues and the overmedicalisation of fatness, nothing will change. By the overmedicalisation of fatness she is referring to the implications of the medical profession defining obesity as a disease. Her analysis of this phenomenon in Hunger is required reading for anyone fighting for body positivity.

At one point during the conversation, Gay talks about how hot Channing Tatum is. She describes in great detail the sexiness of his neck and thighs. It occurs to me at this juncture that I have never really heard a fat woman speak frankly about her sexual desires in public. In mainstream cinema, fat women’s sexuality is often presented as comical, evident in the character of Megan (Melissa McCarthy) in the 2011 film Bridesmaids, whose sexual confidence ‘in spite’ of her weight is the butt of almost every joke. So, in addition to fat women not being considered to be sexy in society, they are also asexualised.

When Little comments on the fact that Gay is such a prolific writer, she responds that she has to work ten times harder than her white male counterparts to get even a fraction of the recognition and praise. She speaks about having to live up to the impossible standards of being a Black woman writer, of the pressure to strive for “Black excellence”, and of the expectation that one Black woman’s views represent those of all other Black women, of all Black people.

In the conversation Little touches not only on Hunger but on Gay’s other works, such as Ayiti (2014): a collection of short stories and poetry set in Haiti, her parents’ home country. Gay wanted Ayiti to challenge the popular narrative of Haiti in the North American imagination as simply being the poorest country in the world, without reference to colonisation, of course.

Gay’s fiction, non-fiction and poetry challenge our assumptions of the marginalised

She also discusses her work with Yona Harvey in Marvel Comics’ World of Wakanda (2016), a Black Panther spin-off, which made Gay and Harvey the first Black women to be lead writers for Marvel. As Gay notes, Afrofuturism allows writers to imagine Black people without colonisation, which is a thread she explores through a love story between two women, Aneka and Ayo, who are former members of the Black Panthers’ female security force.

Gay’s fiction, non-fiction and poetry challenge our assumptions of the marginalised. When a story she pitched about Black lesbians in the suburbs of Lincoln, Nebraska, was rejected for not being believable enough because it was not set in the ghetto, Gay, a queer, Black woman from Omaha, Nebraska, decided that she would not be pigeonholed as a writer. This editor’s erroneous critique demonstrates the pervasiveness of narrow understandings of Blackness.

Are labels dangerous? Is the label of ‘women’s writing’, for example, dangerous because of its homogenising and pigeonholing tendencies? Gay answers that it is “only dangerous in the hands of dangerous thinkers”, explaining that the term reflects the fact that women were historically excluded from literature. This sharp comeback is a Roxane Gay emblem; she answers questions seemingly extemporaneously in a perfectly crafted way.

In spite of the sadness of Gay’s story, both Hunger, and Gay herself, are incredibly funny. Just as she explores the seeming paradox of enjoying rap music and being a feminist in Bad Feminist (2014), so too does Gay defend her embrace of high- and low-brow culture, discussing the Real Housewives TV series in the same breath as feminist theory. Rather than being a contradiction, she says, it is a continuum.

Photo by Slowking4 on WikiMedia. The image is of Gay in the process of speaking into a microphone.